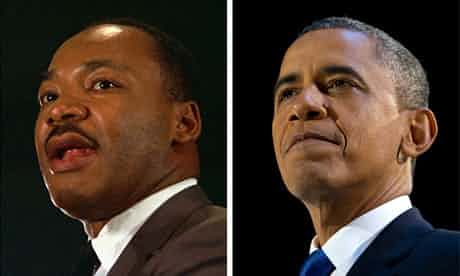 In April 1961, four months before Barack Obama was born, Bobby Kennedy told Voice of America: "There's no question that in the next 30 or 40 years a negro can also achieve the same position that my brother has as president of the United States." Less than a month later a group of black and white freedom riders were firebombed and beaten with baseball bats and lead piping as they tried to travel through the south. The interracial marriage of Obama's parents was not recognised in more than 20 states. Black people's right to vote, let alone stand for election, had not been secured in much of the south. The prospect of a black president never seemed further away.

Four years later the essayist and author James Baldwin mocked Kennedy's prediction. "That sounded like a very emancipated statement to white people," he wrote in The American Dream and the American Negro. "They were not in Harlem when this statement was first heard. They did not hear the laughter and bitterness and scorn with which this statement was greeted … We were here for 400 years and now he tells us that maybe in 40 years, if you are good, we may let you become president."

The fact that Obama's inauguration is taking place on Martin Luther King Day – a federal public holiday to celebrate the birth of the civil rights leader – carries great symbolic resonance. The notion that America might vote in a black president now seems little more than a banal fact of life.

But while this inauguration holds none of the historical significance of his first, the coincidence of the dates – this is only the second time the two days have overlapped – means the country's first black president will be sworn in on the day devoted to its most famous civil rights leader. One hundred and fifty years after Abraham Lincoln's emancipation proclamation and almost 50 since King's "I have a dream" speech, Obama will take the oath in Washington using both Lincoln and King's Bibles.

Tents will be erected in the car park of the Lorraine Motel in Memphis, where King was assassinated and which has now been converted into a civil rights museum, so that people can watch the inauguration. While Obama's ascent to the presidency may have seemed remarkable, King's elevation from the marginalised figure who was killed while supporting a refuse collectors' strike over pay and conditions to a national figure is even more so.

Martin Luther King Day was not brought in without considerable struggle and controversy. The bill to establish it was introduced just a few days after his death in 1968 – the first MLK holiday was in 1986. In between came fierce campaigning by black legislators, trade unionists, civil rights workers and the King family.

"We don't want anyone to believe we hope Congress will do this," said the union leader Cleveland Robinson, at a rally with King's widow in 1969. "We're just sayin', us black people in America just ain't gonna work on that day any more." The movement gained its most popular advocate and widespread attention following the release of Stevie Wonder's Happy Birthday in 1980 – a six-million-strong petition soon followed.

But there was also originally fierce resistance, particularly from conservatives and some white southern politicians. Consensus that King was a man worth celebrating is relatively new. Ronald Reagan once described him as a "near-communist" and signed the bill into law grudgingly in 1983. John McCain, the man Obama defeated in 2008, voted against recognising the day in the Senate and supported his home state of Arizona resisting it for another nine years.

In 2000 South Carolina was the last state to recognise it as a paid holiday – the same year Virginia stopped calling it Lee-Jackson-King Day and celebrating the civil rights icon alongside two Confederate generals. Mississippi still shares the day with the celebration of the Confederate general Robert E Lee's birthday.

The symbolic significance of the day cannot be overemphasised. Obama regularly draws on King's rhetoric and was first nominated at the Democratic convention on the 45th anniversary of the "I have a dream" speech. But parallels between the two men should be not overstated either. King was a pacifist who once branded the US "the greatest purveyor of violence in the world". Obama's re-election campaign made a great deal of his assassination of Osama bin Laden and played down any differences with Republicans.

For all that the most memorable inauguration speech 50 years ago came from the Alabama governor George Wallace, standing on the steps of the state capitol in hickory-striped pants and a cutaway coat declaring: "Segregation now, segregation tomorrow, segregation forever." Today it will come from the son of a Kenyan immigrant and a white American and the highest office in the land.