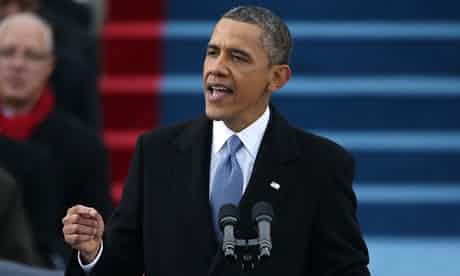 If presidents campaign in poetry and govern in prose, then their second inaugural address is generally delivered in PowerPoint – a less utopian, more businesslike rollout of what they have not yet done. The first time they take the oath is a moment of promise, announced in Technicolor. The second is for posterity, offered in sepia. With expectations for the future tempered by experience and lowered by familiarity after re-election, they crane their necks to history.

This time was different. Obama's second inauguration address was far more idealistic, strident, combative and determined both than his first and than most. If his first term was characterised by compromise, in his second he seems determined to do battle. Explicitly championing gay rights, immigration and healthcare reform, and implicitly endorsing tighter gun laws and wealth redistribution, he sought not to articulate the consensus but to fashion a new one.

His decision not to shroud matters of principle and conviction in the rhetoric of unity and bipartisanship marks a difference in both tone and strategy. With his search for common ground not bearing fruit, he has shifted instead to the high ground.

"Our journey is not complete until all our children, from the streets of Detroit to the hills of Appalachia to the quiet lanes of Newtown, know that they are cared for, and cherished, and always safe from harm."

For almost every lofty sentiment there is, of course, a caveat. Obama's record now includes everything from drone attacks to healthcare reform; the bombing of Libya to the withdrawal of troops from Iraq. Those who seek to assert parallels with Martin Luther King, whose birthday was celebrated on Monday, must remember that this is a president with a 'kill list'. His position on gay rights evolved just in time for the election, and in his first term he deported far more people than George W Bush did in his. But inauguration speeches – especially second ones – are crafted in paragraphs of intention that omit subclauses of justification, let alone calculation. And this was no different.

Circling back to the constitutional refrain "we the people" (a phrase he used five times), it was a call for collective action to enable the country to live up to its founding creed.

"For history tells us that while these truths may be self-evident, they have never been self-executing; that while freedom is a gift from God, it must be secured by His people here on earth … We have always understood that when times change, so must we; that fidelity to our founding principles requires new responses to new challenges; that preserving our individual freedoms ultimately requires collective action."

There were two audiences for this speech. The first was the American public. If today's ceremony, with its celebrations of democracy, marked a ritual veneration of the office of the presidency, the last four years have shown the limitations of that office. Four years that have seen the US teeter close to a fiscal cliff and almost bash its head on a debt ceiling illustrate Obama's naivety in believing he could simply rise above partisan divide.

On most key issues – wealth distribution, gun control, gay marriage – the public (we-the-people) are closer to Obama's positions than Congress, but have yet to feel sufficiently energised to fight for those views the way their opponents do. With his election victory behind him, Obama now understands that any legacy beyond being the first black president will hinge on his ability to bring pressure to bear on Congress from the outside.

So the second audience was Congress in general and Republicans in particular. There were scathing lines for them. "We cannot mistake absolutism for principle, or substitute spectacle for politics, or treat name-calling as reasoned debate. "

His mocking revealed a shift in the balance of power between the executive and the legislature as the public has tired of gridlock and inaction. It was a shift reflected in the Republicans' decision last week to concede the next debt ceiling battle and cave on higher taxes. Throughout, the clarion call was for Congress not to perform but to act – a recognition with the broad, deep frustration with the nation's polarised political culture.

"Being true to our founding documents does not require us to agree on every contour of life; it does not mean we will all define liberty in exactly the same way, or follow the same precise path to happiness. Progress does not compel us to settle centuries-long debates about the role of government for all time – but it does require us to act in our time."

If the speech was better, the event itself was flatter. The crowds, of course, were smaller than last time and, even though it was Martin Luther King Day, the nature of the event was more low-key. A second inauguration is like a renewal of vows, and, in the words of Sade: "It's never as good as the first time". Nonetheless, the energy in the crowd still, at times, came off more like a campaign rally than a state event. The romance may have gone. But the love is still there.