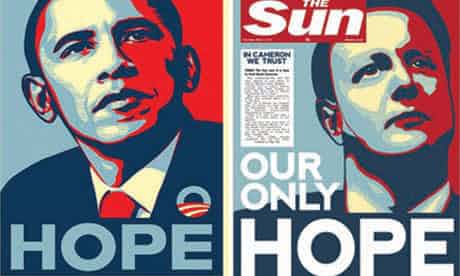 Obama's 'Yes we can' slogan: a strange choice for Brooks and Cameron
The Guardian

As texts go it was devastating, arguably one of the most revealing pieces of evidence to emerge from the Leveson inquiry into phone hacking.

The message from the former CEO of Rupert Murdoch's News International Rebekah Brooks, to the now British prime minister, David Cameron, is perhaps the clearest evidence thus far of class collusion, influence peddling and naked partisan bias. But it's the sign-off that intrigues. For on the eve of Cameron's crucial speech to the Conservative party conference, Brooks bids a gushing farewell with the words: "Yes we Cam."

And so it was that Cameron went to deliver his pitch for austerity – "No you can't" – with a mutation of Obama's campaign slogan lingering in his inbox.

This would not be the last time News International would seek to channel Obama's message of empowerment (let's leave aside for a second his record of delivery) through the Conservatives.

On election day in 2010 the Sun's front page was a mock-up of the iconic Obama poster with a picture of Cameron and the slogan: "Our only hope".

The notion that Obama's campaign tactics would be copied should come as no surprise. It was a brilliant campaign, and was copied everywhere. In Ghana, John Atta Mills produced posters of himself standing next to a life-size cut-out of Obama. In Brazil, at least eight black candidates took advantage of a quirk in electoral laws so they could stand as "Barack Obama" in elections.

Even the French were giddy. "America is a New World again," said Rama Yade, France's junior minister for human rights, and France's only non-white government member at the time. "On this morning, we all want to be American so we can take a bite of this dream unfolding before our eyes."

What's strange is that it would be used by these people in this way. The phrase "Yes we can" gained currency just a couple years before during the Latino-led demonstrations for immigrant rights in 2006 in Spanish: "Si se puede" – hardly a cause championed for the anti-immigrant Murdoch press.

As an election slogan, its genius lay in its mixture of vacuity and acuity, depending on what you needed. It said little but implied a great deal – yes we can elect a black president, yes we can turn our country around, yes we can defeat the Republicans. It molded itself to fit your aspirations: simultaneously it could mean almost anything to anybody and nothing at all.

But for all its flexibility, its resonance lay in the notion that something improbable was afoot. That hardly fits the bill for a Cameron victory. With the help of corporate media, the Conservatives can put an Eton-educated prime minister into Number 10 to slash the living standards of the poor. Yes. We. Cam.

follow on twitter
RT @MCRSociology: Gary Younge discusses identity politics and America with Will Hutton in this episode of @thewesocietypod https://t.co/72…
RT @mart_welton: Congratulations to all those getting their A-level results today. If you have BBB at A-level or above you can still apply…
RT @BernardineEvari: Please follow the groundbreaking online #MuseumofColour UK, founded by the unstoppable Samenua Sesher. The 1st gallery…
RT @EthnicityUK: Gary Younge is interviewed by @sonikkalogan about his work on racism and gun violence in @the_hindu #DataPoint podcast. h…
RT @thefreedomi: 🚨 NEW: Saudi women’s rights activist & academic Salma al-Shehab was sentenced to 34 years in prison + 34 year travel ban f…
RT @LRB: #DawnFosterForever! On Thursday 15 September at the @LRBbookshop, @BizK1, @piercepenniless, Lynsey Hanley and @garyyounge will d…
RT @ShowunmiV: This is how we support Black women and girls https://t.co/8YmgV21zHo
RT @sonikkalogan: It's #DataPoint Pod Thursday! In this week's episode, I talk to @noraneus, @garyyounge and @Casey_J_Wooten about the U.S.…
RT @bgnoiseuk: Next month, @LRBbookshop will host an event to celebrate the life and work of Dawn Foster with @BizK1, @piercepenniless, Lyn…
Help me Twitter. The quote: ""You can cut all the flowers but you cannot keep Spring from coming." is most commonly… https://t.co/Xs7JkiOEd5
© Gary Younge. All Rights reserved, site built with tlc
Transdermal verapamil 15 gel cost How much does aldactone cost Can you take bactrim and levaquin together Imitrex and naproxen together How much does vaniqa cost per pill Can you buy avapro over the counter Generic furosemide cost How to get a cipro prescription from your doctor Can you get nitrostat over the counter Bactroban ointment price ph