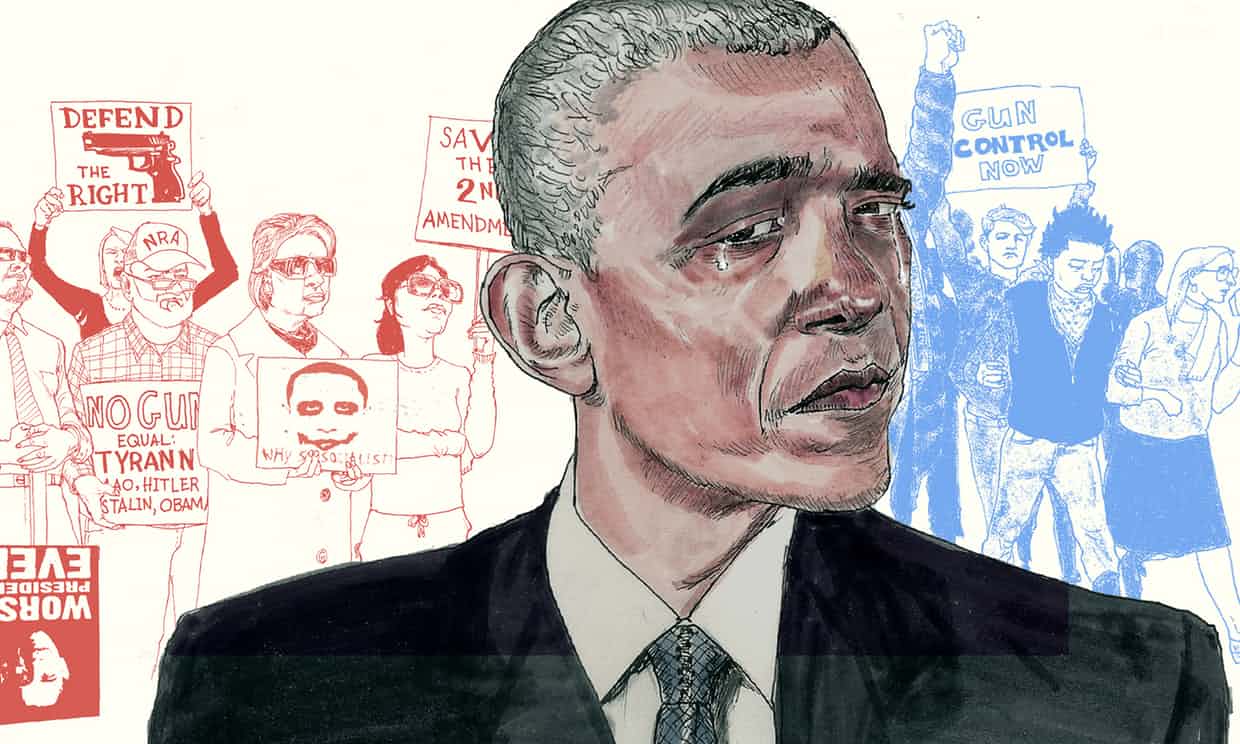 Obama was right to weep: he's got plenty to cry about
The Guardian,
Illustration: Vin Ganapathy

“Americans would like their president to be sick and needy,” James Zogby, an executive member of the Democratic Executive Committee, told me a few years ago.

It was a year before the last presidential election, the economy was still stalling, Obama’s approval ratings were diving and the president was under fire for his inability to connect with the electorate.

“They want their president to really need them,” Zogby explained. “[But Obama] doesn’t [need them]. He’s OK, he’s relaxed, cool, calm. I’d love him to call me up like Clinton would ... People like that. He doesn’t need it.”

But with just a year to go in his presidency, Obama seems to finally have got in touch with his emotional side. And then some. This week, he wept as he signed an executive order on gun control.

“Every time I think about those kids, it gets me mad,” he said, with tears sliding down his cheek, referring to the small children who were shot dead in their primary school in Newtown, Connecticut, three years ago. Last month, Aretha Franklin had barely got through the first verse of (You Make Me Feel Like) A Natural Woman before Obama started crying.

The sources of grief are endless. When it comes to domestic politics, he just can’t win

It’s pointless speculating on what is making him quite so weepy. But the events behind this week’s performance of compassion do form part of a pattern: another occasion on which the president has had to go to extraordinary lengths to get quite ordinary things done. And when you look back over the past seven years, the sources of such grief are endless.

When it comes to domestic party politics, he just can’t win. When he first became president, Republicans slammed him for being a socialist – an epithet, from their lips, of the worst kind. When he wasn’t “palling around with terrorists”, he was trying to redistribute wealth, undermine the work ethic and generally wreck the economy. With just one year before his terms ends, they now brand him a monarch – King George III in blackface, ready to ignore constitutional niceties and impose his will on a reluctant nation. No wonder he keeps bursting into tears. Since socialists are none too keen on monarchs, they will no doubt soon call on him to depose himself in a bloody revolution.

The reality, of course, is that he is neither. Wealth inequality in general has increased since Obama came to office, as has the racial wealth gap and the poverty rate. The Dow has performed far better under him than it ever did under George W Bush, and he has added twice as many private-sector jobs as his predecessor. If he were a socialist, he wouldn’t be a very competent one.

Meanwhile, he has used his veto powers less often than every president since Lincoln with the exception of Warren Harding and James Garfield – both of whom died during their first terms. He has also signed fewer executive orders (which bypass Congress to force limited changes in policy) than any two-term president since Ulysses S Grant, who left office in 1877. That makes him the least assertive American president in more than a century.

When he ran eight years ago, Obama said he wanted to be transformational. The kind of president, like Ronald Reagan, Lyndon Johnson or Franklin Roosevelt, who ushers in a paradigmatic shift in American politics or society, or both. Quite how he envisaged that happening with the moderate platform on which he ran is not clear. Nor, in the end, would it matter. He hadn’t counted on the opposition party losing the plot, subplot and almost all its sympathetic lead characters. Instead, thanks to Republican dysfunction, he has been left performing triage; constantly patching up a patient who is desperate for a cure but won’t take their medicine because they’ve been taking advice from a quack. Put bluntly, domestically, his task has largely been to save America from itself in any way he can.

Take the gun control measure he passed earlier this week. Last year, there were 330 mass shootings in the US. Mass shootings represent a relatively small proportion of the shootings that take place in the country. All Obama did was close a loophole by expanding background checks to those who buy guns from online sellers and gun shows. It was, almost literally, the very least he could do on the matter.

It was also all he could do. Despite the fact that such policies have 85% support in the country, including 79% among Republicans, even that could not get through Congress; not even after Sandy Hook.

“The gun lobby may be holding Congress hostage right now,” Obama said on Tuesday, “but they cannot hold America hostage.” But they can and they have.

The trouble is that when it comes to dealing with the right, fiction often works better than fact. That’s not just limited to guns. 1 January saw the long-delayed introduction to public funds being made available so that doctors can talk to patients about living wills, advance directives and general end-of-life care. This, one would think, is uncontroversial. Doctors are well-positioned to talk to patients and families about how those with chronic or terminal illnesses want to be treated before their situation reaches crisis point. In a survey, conducted by the Conversation Project, which supports the idea, 90% of Americans said it was important to have such conversations, while fewer than 30% actually have them.

But when those conversations appeared under the mantle of Obamacare, the right branded them “death panels”. “We should not have a government programme that determines if you’re going to pull the plug on grandma,” said one senator. Sarah Palin claimed: “Seniors and the disabled will have to stand in front of Obama’s death panel, so his bureaucrats can decide, based on a subjective judgment of their ‘level of productivity in society’, whether they are worthy of healthcare.”

None of this was true. None of it mattered. It was removed from the bill. As recently as 2012, about 40% of Americans believed Obamacare would create death panels to decide patient’s fitness for care.

Republicans claimed raising taxes on the rich would crash the economy. But, as the New York Times columnist Paul Krugman points out, recent tax data suggests otherwise. The tax rate for the top 1% rose 4%; for the top .001%, it has risen 6.5%. As Krugman explained in a recent column, these hikes have raised roughly the same amount as is spent on food stamps and Obamacare. Most Americans believe the wealthy should pay more tax. But this was mostly achieved by allowing the Bush tax cuts to expire, and tax reforms within Obamacare.

There’s a pattern here. A clear problem is identified – insufficient background checks, inadequate end-of-life care, economic malaise. Most people agree on a solution. Obama embraces a moderate version of that solution. Conservatives spread misinformation about what that solution will mean, and block every legislative effort to allow it to happen. Obama eventually finds a way around their stonewalling to produce an even more tepid version of what he originally suggested, so that Americans can get what they want but don’t know how to get.

What this tells us about the Republican party is the subject for another article. The fact-free charlatanism on display in the current nomination battle illustrates the degree to which they have doubled down on the politics of fearmongering through fiction.

More urgently, given that it’s an election year, this pattern lays bare a fundamental problem with what masquerades as American democracy. For in a system in which seats are openly gerrymandered, money is speech, corporations are people, you have to pay to play and the rich pick both the candidates and their platforms, the will of the people only gets a look-in if it coincides with the will of the wealthy and the agenda of the party zealots.

To be truly transformative, Obama would have to take that on. And that’s the kind of battle that really will bring tears to your eyes.