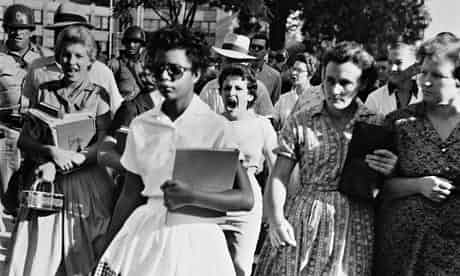 On race, the US is not as improved as some would have us believe
The Guardian,
Photograph: Bettmann/Corbis

At the march on Washington in August 1963, where Martin Luther King made his "I have a dream" speech, the United States Information Agency, the nation's propaganda wing devoted to "public diplomacy", made a documentary. It wanted to make sure that the largest demonstration in the history of the US capital, demanding jobs and freedom and denouncing racism, was not misconstrued by the nation's enemies or potential allies. Their aim was to show the newly independent former colonies that the US embraced peaceful protest. "Smile," they called to demonstrators as the camera rolled. "This is going to Africa."

"So it happened," Michael Thelwell, a grassroots activist, told the author Charles Euchner, "that Negro students from the south, some of whom still had unhealed bruises from the electric cattle prods which southern police used to break up demonstrations, were recorded for the screens of the world portraying 'American democracy at work'."

The US's capacity to fold the stories of resistance to its historic inequities into the broader narrative of its unrelenting journey towards social progress is both brazen and remarkable. (Arguably, this is preferable to the European tradition of burying such histories and hoping no one will ever find them.) Tales of the barriers that come down are woven neatly into the fabric of a nation, where each year is better than the last; the obstacles that remain are discarded as immaterial. What is left is a mythology cut from whole cloth.

So it will be in coming months with the emergence of important milestones. Next month will be the 60th anniversary of Brown v Board of Education, the landmark supreme court verdict that made official, codified racial segregation illegal. In July it will be 50 years since the signing of the Civil Rights Act by President Lyndon Johnson – legislation that lent muscle and democratic endorsement to the aforementioned court ruling – and the Mississippi Freedom Summer, when idealistic youngsters from the north joined African-American activists in the south to fight for justice.

On these occasions Barack Obama stands as both willing embodiment and passive exemplar: without these changes, he says, his presidency could never have happened and, insist others, if he can do it then anybody can.

The freedoms this legacy bequeathed should be neither denied nor denigrated. The signs came down, space was created, opinions evolved. Recent years have shown a big increase in minorities moving to suburbs and all groups entering mixed-race relationships. It is a different and better country because of them. But nor should those freedoms be exaggerated. It is not as different or as improved a country as some would have us believe. For as some doors opened, others remained firmly closed – providing two main lessons that challenge the mainstream framing of this era's legacy.

First, racial integration sits quite easily alongside inequality and discrimination. The legal right of people to mix does not inevitably change the power relationship between them. The former confederacy was, in many ways, the most racially integrated part of the US. There were high rates of miscegenation (forced and voluntary); slaves and servants raised white children and often lived in close quarters with their owners. Strom Thurmond, who ran for the presidency in 1948 as a segregationist, fathered a black daughter by a maid in 1924. The issue was never whether people mixed but on what basis and to what end.

"The issue for black people was never integration or segregation but white supremacy," explains the University of Chicago professor Charles Payne. "The paradigm of integration and segregation was a white concern … That was how they posed the issue of civil rights, given their own interests, and that was how the entire issue then became understood. But the central concerns of black people were not whether they should integrate with white people or not but how to challenge white people's hold on the power structure."

In most arenas where power is exercised today that challenge not only remains but is getting tougher and more complex, which brings us to the second point. What has been won can be lost. Far from engaging on a straight path towards equal opportunity, the US has suffered many detours and reverses. We are in the middle of one now. The legal framework provided by Brown, the Civil Rights Act and the Voting Rights Act, passed in 1965, is being steadily gutted, with predictable consequences. Across the country, schools are resegregating.

According to research recently conducted by ProPublica, "black children across the south now attend majority-black schools at levels not seen in four decades." These racial inequalities have been compounded by class entrenchment. In many areas – income, wealth, incarceration, employment – the gaps between black and white are the same as 50 years ago or worse. In a 2012 report, UCLA's Civil Rights Project noted: "Nationwide, the typical black student is now in a school where almost two out of every three classmates (64%) are low income."

These trends were anticipated even as the ink was drying on the laws many hoped would bring them to an end. As early asIn 1965, the civil rights leader Bayard Rustin pointed out: "The Negro today finds himself stymied by obstacles of far greater magnitude than the legal barriers he was attacking before – automation, urban decay, de facto school segregation. These are problems which, while conditioned by Jim Crow, do not vanish upon its demise. They are more deeply rooted in our socioeconomic order; they are the result of the total society's failure to meet not only the Negro's needs, but human needs generally."

At a time of growing economic inequality and legislative mendacity against the poor, those human needs are still far from met. "You know, Bayard," Martin Luther King told Rustin after the 1965 Watts rebellion in Los Angeles. "I worked to get these people the right to eat hamburgers, and now I have to do something to help them get the money to buy them."