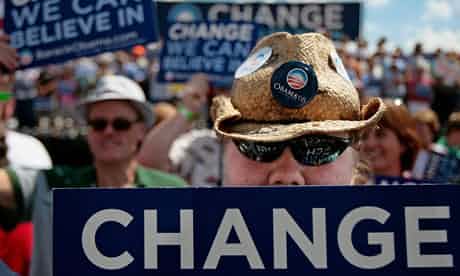 One year on, Obama has shown that meaningful change can happen
The Guardian,
Photograph: Chip Somodevilla/Getty Images

Following a spate of hate crimes against gays in Dallas and Houston in 2000, the late Molly Ivins asked the Texas Civil Liberties Union board representative from Midland if there had been any gay-bashing in her home town. "Hell, honey," she replied. "There's not a gay in Midland would come out of the closet for fear people would think they're a Democrat."

American is so vast and diverse that extrapolating national trends from local political cultures is perilous and often futile. This was made clear again last week following the slew of local elections and referendums that took place across the country. Maine, by most measures one of the more liberal states in the union, voted against gay marriage, while in Houston, in Texas – arguably one of the nation's more conservative states – an openly lesbian candidate topped the mayoral vote in the first round. New York, one of the most Democratic cities in the country, rejected a Democrat for mayor for the fourth straight time; Atlanta, a Democratic city that has had a black mayor for the last 36 years, placed a white woman who votes in Republican primaries in the lead for mayor at the end of the first round.

There are too many local exceptions to make many rules that can stick. Nonetheless, for those who confuse anniversaries with milestones and elections with politics, last week was a big one. It is a year since Barack Obama was elected. And while he may not have been on any ballot this time around, for some the desire to frame the week as a referendum on his presidency was irresistible.

To some extent they were right. There were moments last week that illustrate the central challenges of his administration. The trouble is that those moments in question had nothing to do with the elections, and the results are as yet inconclusive. At first glance, the raw electoral material last Tuesday was compelling. In gubernatorial races in Virginia and New Jersey – both states held by Democrats and taken by Obama last year – the Republicans won. Meanwhile, in a congressional byelection in upstate New York, where the Republicans have reigned in most areas for more than a century, the Democrats triumphed.

While these results are intriguing, they are not particularly indicative of anything beyond their own borders. The gubernatorial losses were certainly a blow to the Democrats. But not quite the blow the Republicans claimed they were. The elections were primarily decided by local factors (namely taxes and personalities) and swung on a low turnout – Obama got more votes by himself last year than all of the votes cast for both parties in either state last week.

Similarly, the congressional byelection certainly dealt a blow to the Republicans. But not quite the blow Democrats claimed it was. An internal battle, between social and fiscal conservatives and moderates within the Republican movement, descended into farce after Sarah Palin, radio host Rush Limbaugh and any number of Fox News anchors waded in. The official moderate Republican candidate withdrew less than a week before polling day and endorsed the Democrat, who then faced an ultra- Conservative. Even with all of that, the Democrat only won by 4%.

The saga certainly highlighted the self-destructive streak among the Republicans' hard-right base. But the slender margin of their defeat, and the peculiar circumstances in which it was inflicted, suggest that they have a far greater reach than previously imagined – and are viable even outside the south.

As last week drew to a close, events both unpredicted and long anticipated illustrated what is necessary and what is possible in American politics at this moment, and gave an indication of what they could mean for Obama's presidency.

Last Thursday came the horrific shootings at Fort Hood. Of the immediate issues surrounding the tragedy there is nothing much to say. The suspect, Nidal Malik Hasan, is in custody and should be judged fairly and punished accordingly. But the broader themes of the psychological stress and possible social consequences that come with war are unmistakable. This was no one-off. In May Sergeant John Russell shot and killed five fellow soldiers at a combat stress clinic in Iraq; in September 2008 Sergeant Joseph Bozicevich killed two US soldiers at his base in Iraq. The US military has record rates of suicide and ever rising rates of divorce, domestic violence and alcoholism. The havoc these wars are causing abroad may challenge the imagination of the nationalist; but the havoc they are causing at home should not.

A few years ago, Zach Flory wrote this letter back to his mother after one of his 19-year-old friends was killed in Iraq: "I just can't stand it. I can't get rid of the feeling that I probably won't make it home from this war. I have this horrible feeling that his fate will soon become my own … And if you don't die, the worst part you have to live with is the guilt of surviving. Surviving this war and not dying like your buddies to your left and to your right in combat." Flory came back alive but, like many, on some level he will always be fighting this war.

Last Friday came the unemployment rates, which went into double figures for the first time in a quarter of a century while the broader measure of unemployment and underemployment rocketed to 17.5% – the highest since the Great Depression. This pain is not distributed evenly. Almost one in five of the young, and more than one in seven of African Americans and of those without a high school diploma, are on the dole. Almost a third of young black men have no work. Seven of the 10 states with the highest levels of unemployment voted Democrat. Three of those – Nevada, Florida and North Carolina – switched from Republican to Democrat last year. In other words, the people primarily responsible for electing Obama are hurting the most.

Finally, late on Saturday night came the narrow majority in the House of Representatives for healthcare reform. Notwithstanding the difficult compromises it took to make this possible, it was a landmark achievement. Now the Senate must vote on its own bill before congressional leaders attempt to reconcile the two. Comprehensive reform could yet be defeated. But it is the closest the country has been to healthcare reform for more than four decades. It shows that meaningful change is possible.

The wars, jobs and healthcare reform are the issues on which Obama will be judged and on which this political period will be framed. The issue of federal budget deficits only emerges as a factor when public spending is deemed to produce scant results.

The good news for Obama is that the Republicans have no credible agenda to deal with any of these issues and no viable response to any of his proposals. The bad news is that his economic proposals are inadequate, his foreign policy is in shreds, and his healthcare reforms hang in the balance. Those who insist it is too early to judge his presidency have a point. But it's not just about him. The impatience to see concrete results is not driven solely by unrealistic expectations but also by the fact that people are broke and desperate. For a growing number, change is not a slogan – it's an urgent human need.