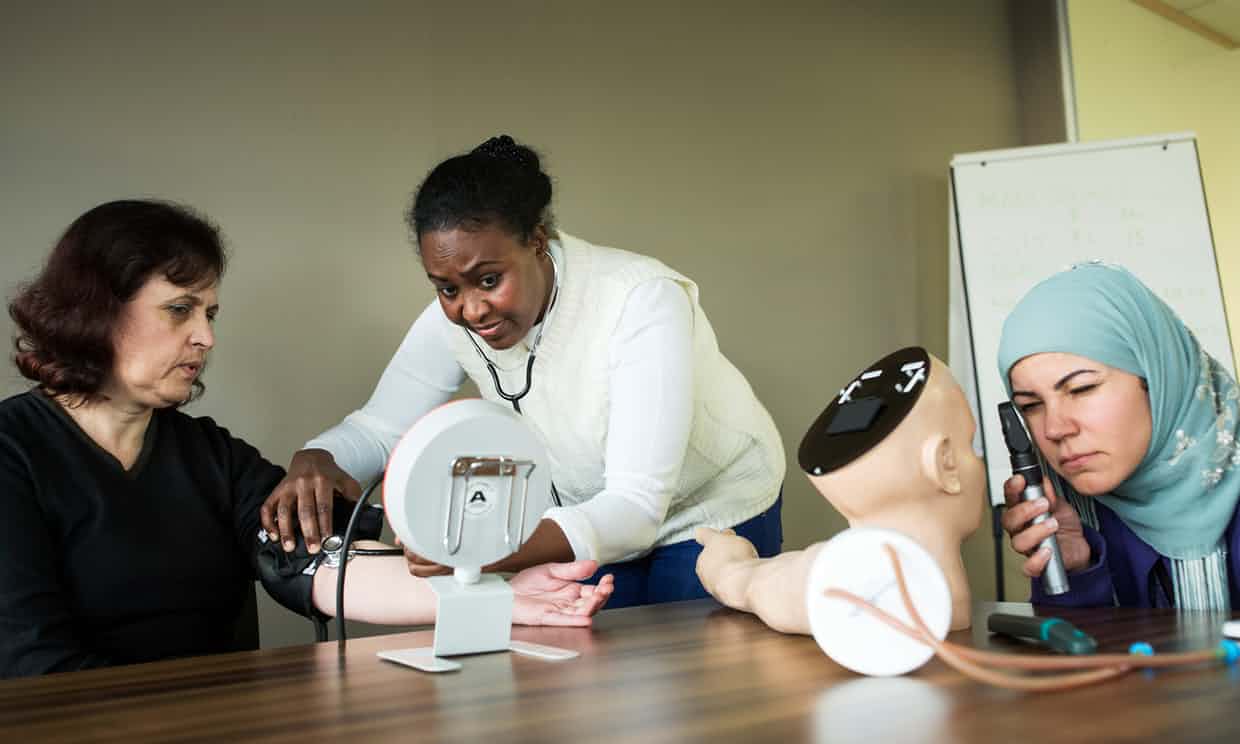 Persecuted at home, mistrusted in the UK: the refugee doctors battling for acceptance
The Guardian,
Photograph: David Levene for the Guardian

In a classroom overlooking the East End of London, a group of refugee doctors retraining for British certification are watching a role-playing session on type 2 diabetes. But first there is cake.

Faryal Aldaesaa, a neonatal doctor from Bahrain, has made a gloriously sticky number with walnuts on the outside and green filling which, it turns out, is made of parsley. “Most of your five-a-day are in here,” she tells her classmates. Berbang Abdulhannan, a gynaecologist from Aleppo in Syria, goes straight for the arteries with some Ferrero Rocher.

Both have just passed the Plab2 (the Professional Linguistic Assessments Board second paper), set by the General Medical Council, which is the gateway for international medical graduates to practise medicine in Britain. One more obstacle gone. One step closer to the professional integration some have been seeking for several years. And one more sweet treat before they ponder how to instruct the great British public on the health benefits of weight loss.

The Building Bridges programme, run by the Refugee Council with help from the NHS and other charities, was set up to make these transitions happen. The NHS needs doctors. These doctors, who are refugees, need work. This scheme provides the connection by supporting refugee health professionals to requalify to UK standards. As well as helping them navigate the bureaucracy of the GMC, providing language support, clinical attachments and a general support network, they also have retired volunteer doctors to talk them through the likely scenarios they will encounter on the job.

In 2013-14 they helped 37 refugee health professionals into paid employment and 10 refugee doctors get their GMC licence. Applicants need help collecting paperwork from the various countries they may have qualified or practised in, many of which are now torn apart by conflict. 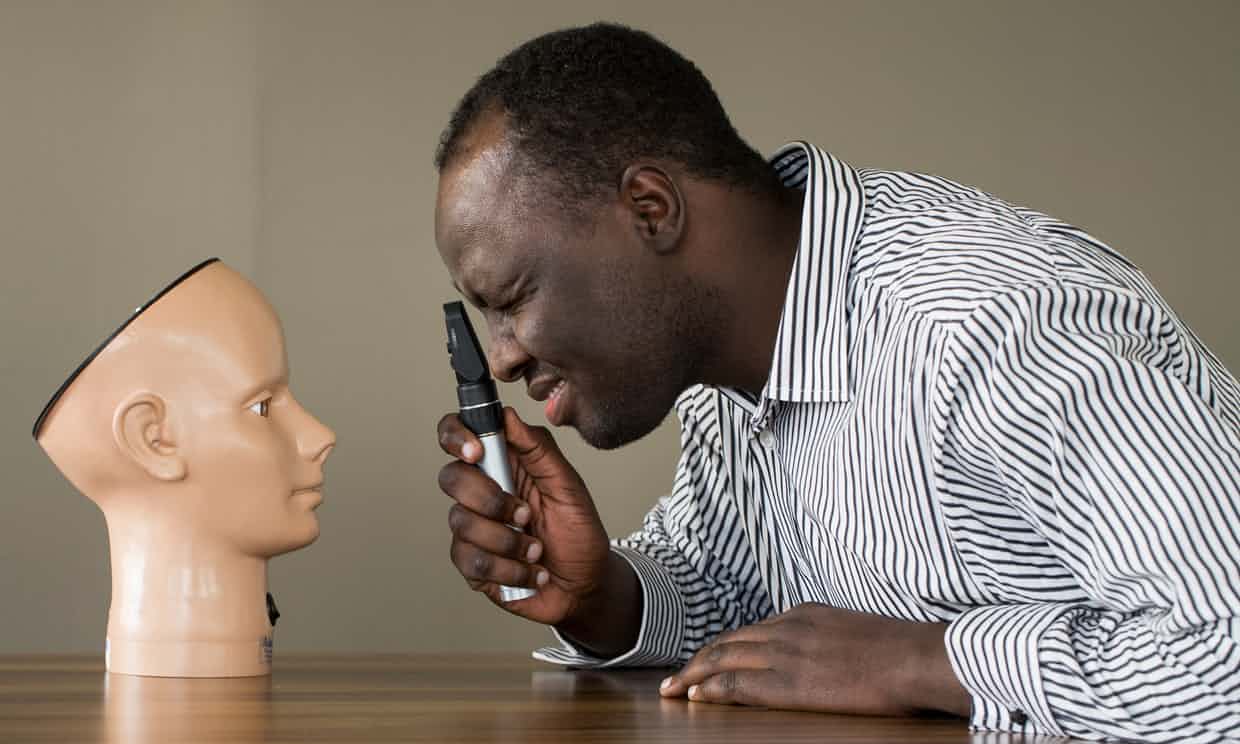 Ismail Adam, 31, was a health worker in Sudan before fleeing to Britain. Photograph: David Levene for the Guardian

Soraya Azimi, for example, is an Afghan doctor who has studied in Russia, trained in the Netherlands and practised in Afghanistan – until the Taliban made that untenable. To satisfy the GMC she had to gather documents from all three countries. The search went on for months. “Without the help of Building Bridges I couldn’t go any further,” she says.

Ismete Osmanaj, a qualified GP originally from Albania, spent nine years trying to practise here, to no avail. “After the years go by you think: ‘When is enough?’ and ‘Is this worth it?’ You kind of give up on your dream,” she says. She applied for jobs in dry cleaning but was overqualified. “I just wanted to work,” she says. “To give my contribution. But once I found Building Bridges and registered I knew I was in the right place. It took me just three years to get through everything. And these were mostly things I could not do individually.”

Doctors in most parts of the world are good earners. Why would they come here to live on £65 a week?

Stephen Nickless, a retired GP who has recruited many fellow professionals to assist in the classes, says much of what he teaches comes down to language and culture. “We can teach them the words and gestures but they also really need to understand the culture. The way that British people organise their home lives; why they value confidentiality; how much information they want. All that sort of thing. They need help gaining insight into the way we do stuff here.”

And, as the celebratory cake on the table testifies, they do see results. Only the other day, Chris Derrett, one of the volunteers, says he saw Ibrahim (not his real name) – a Building Bridges graduate – practising in a hospital. “He was working in Morrisons less than a year ago,” says Derrett. “There’s all this talent out there that we need to harness and harvest it. It’s very rewarding.” 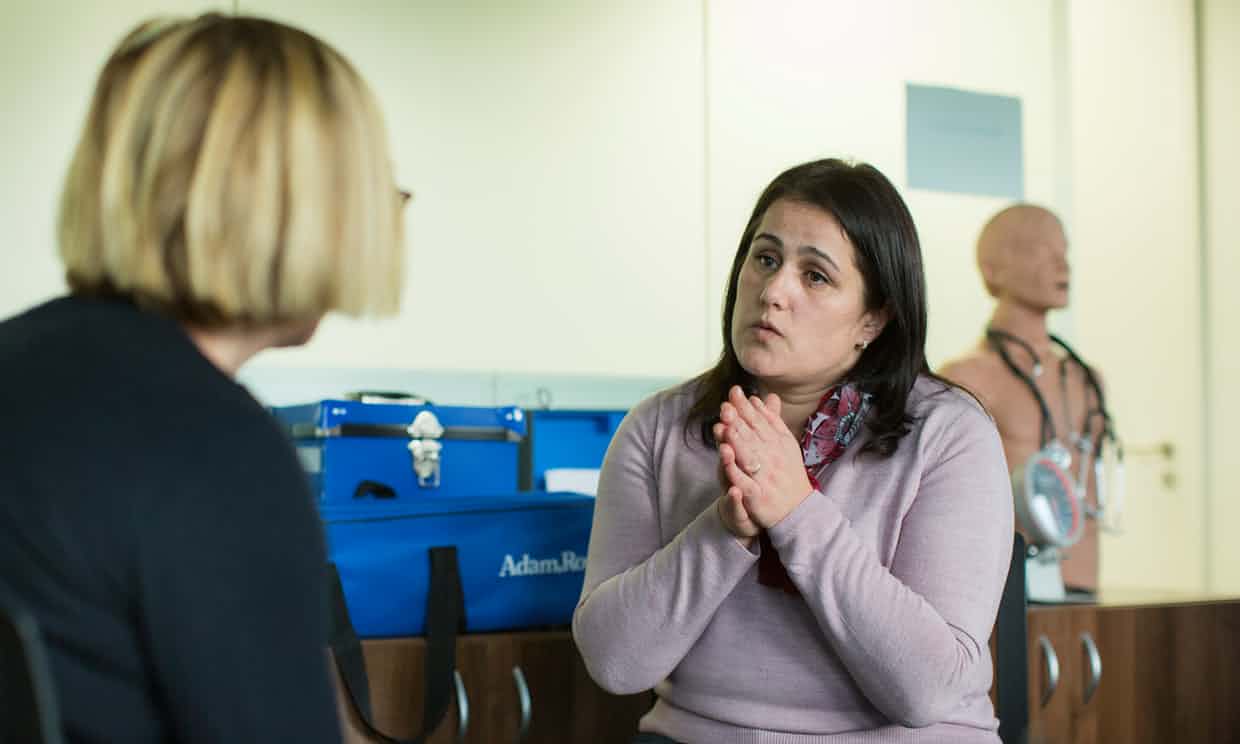 Ismete Osmanaj, a GP from Albania, talks to a mock patient as part of the Building Bridges course. Photograph: David Levene for the Guardian

Often it is precisely because refugees were doctors that their lives became vulnerable: they were targeted for treating those who suffered in times of war and strife. Aldaesaa was among the doctors who treated demonstrators injured during anti-government protests in Bahrain in 2011. The government raided the hospital, interrogated the doctors and put many in jail. “When I received the letter for interrogation I went to the airport immediately with my children and came here seeking asylum,” she says.

Berbang had been enduring the bombing in Aleppo, Syria, and was moving to a new house when her old one was flattened. But the government did not like the fact that she and her colleagues gave medical assistance to rebels. “There were three of us working in the gynaecology department. Then they arrested one of us and killed her. I could not stay any more. Not one more hour.” She left with her daughter. Her other colleague later joined her in England.

On their arrival many were stunned by the negative assumptions about their motivations for seeking refuge. “They can’t understand why they are sometimes portrayed as benefit scroungers,” says Fahira Mulamehic, a refugee from the Balkans, who helped to set up Building Bridges and now manages it. “Doctors in most parts of the world were good earners, had a good quality of life. They say: ‘Why would I come here to live on £65 a week when I had a house with six bedrooms and a swimming pool’?”

Aldaesaa, who originally earned her medical degree in Ireland, is incensed by the negative depictions she sees in the media: “It is not a privilege for us to wait for these benefits every week. We want to change the picture of refugees. We want to positively contribute, but the system does not make it easy.”

During the role play on diabetes, in which Osmanaj talks a pretend patient through what to expect, her fellow students are called on to judge whether “she looked like a proper doctor” and was “guiding the patient through a logical sequence”. Beyond a few kinks in her English which Nickless ironed out, her fellow classmates’ verdict is that she was more than convincing. Which is just as well. After 12 hard years, during which she often felt like giving up, this is her last class. This week she starts practising again.

The Refugee Council is one of six refugee charities supported by the Guardian and Observer charity appeal 2015. To donate click here.