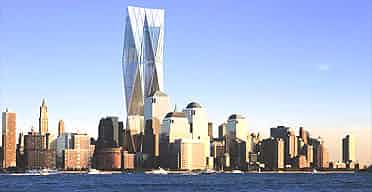 Pies in the sky? Thumbs down for Foster design
The Guardian

Lord Foster, the British architect whose design for a building to replace the World Trade Centre was one of the most popular with New Yorkers, has been all but ruled out of the competition.

A team of architects rejected his proposal of two crystalline towers because they felt it would not be practical to construct or find tenants to fill. The architects' recommendation will go to the panel which will make the final decision next week. However, it is still possible that Foster's name will be thrown back into the ring.

The Berlin-based architect Daniel Libeskind and a team in New York led by Rafael Vinoly and Fred Schwartz emerged as the two top choices from board members of the Lower Manhattan Development Corporation, sources told the New York Post.

The Libeskind plan contains a garden-filled tower that rises 1,776ft and designates the seven-acre area within the site's walls for a memorial. The New York team's proposal features a pair of latticework towers built around the footprints of the twin towers.

Given the complex decision-making that surrounds the rebuilding of the site, the decision of the architects is not final and has no legal basis, and some sources say there is still strong support for Foster's design.

Responsibility for the site is divided between the governors of New York and New Jersey, who own the land, and two businessmen who leased the space. But public involvement has played a significant part.

The first six proposals, unveiled in July, were so underwhelming that the LMDC went back to the drawing board. It returned with a far more encouraging shortlist of nine models, which have been on display for several weeks.

The public consultation process has had to balance demands from the victims for a memorial as well as business demands.

The official decision on the final designs is expected to be made next week.