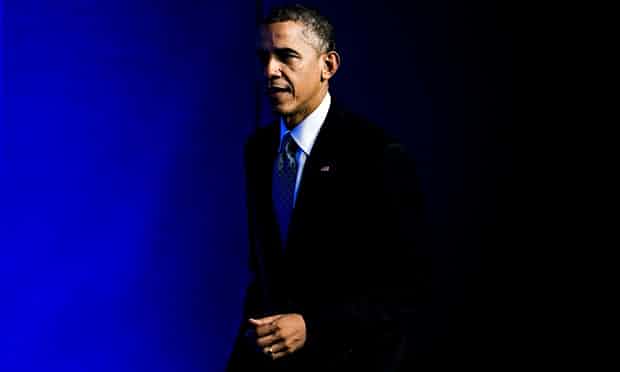 Republicans have called him a dictator. So why can’t Obama get his own way?
The Guardian,
Photograph: Asanka Brendon Ratnayake/REX

A crowd of anti-immigration protesters in Oracle, Arizona, gathered in July to block a bus they’d heard was full of children from Central America who had crossed the border unaccompanied, and possibly illegally, and were supposed to be arriving at a local shelter. Seeing a school bus approaching, Adam Kwasman, a Republican state legislator, broke off from a rant about Lady Liberty to tweet: “Bus coming in. This is not compassion. This is the abrogation of the rule of law.” He then joined the mob of protesters. He later told a television reporter: “I was able to actually see some of the children in the bus – and the fear on their faces … This is not compassion.”

Kwasman was right about one thing. This was not compassion. But then it was not a bus full of migrants either. Kwasman, it turned out, had got his Latinos in a twist. He had, in fact, harangued a bus full of kids from the local YMCA on their way to camp. Kwasman ran for the Republican nomination in the local congressional district but was roundly defeated in the primary. That’s too bad. High on rhetoric, low on facts, utterly misguided, racially motivated, brazen, boorish, ridiculous and a little bit scary – he would have fitted right in with the Republican majorities.

When Republicans recently won the midterms, taking both the House and the Senate, they promised things would change. Less than two weeks later, however, it looks less like a new day than Groundhog Day. Already the discussion has descended into gridlock and trash talk. Hardliners are calling for President Barack Obama to be impeached; the moderates threaten to shut down government – again. The Republican House speaker, John Boehner, has put Obama on “burn notice”: “When you play with matches, you take the risk of burning yourself, and he’s going to burn himself if he continues to go down that path.” The path in question would lead to a modest immigration reform. According to leaks it would prevent the deportation of up to 5 million people living in the United States while giving many of them work permits and shifting the focus of the nation’s immigration agents to deportations of convicted criminals and people who recently arrived in the country without documents.

This would be a popular path. Around half the country believes undocumented immigrants should have a pathway to citizenship, while another 15% believe they should be able to stay without becoming citizens. An overwhelming majority think immigration is a serious issue and that it’s important that Congress does something about it. Obama should be pushing at an open door. The trouble is, Republicans have put all their baggage behind that door and are now blocking it with all the bodies they have. Obama should not take this personally. Republicans killed immigration reform when George W Bush proposed it in 2007. Last year Boehner couldn’t get any kind of immigration reform through his own caucus.

Unable to reach a compromise with Congress, because he has had nobody to negotiate with, Obama will instead implement an executive order – a less ambitious plan, for which polls show a narrow majority and which he says does not require congressional approval.

This is the plan that has sent the newly elected Republican majorities into conniptions. Branding him a dictator who refuses to reach across the aisle, some claim such an order will be illegal – which is unlikely. Obama, they say, is poisoning the well of bipartisanship.

There are four reasons why this line of attack is unlikely to work. First, Republicans have ostentatiously relieved themselves in that well for the past six years, and nobody in their right mind has considered drinking from it for quite some time. Having shut down the government and taken the nation to the brink of default, they are seen by nobody as the party of compromise.

Indeed, their own supporters don’t even want them to compromise. While most of the country wants the two parties and houses of Congress to work together, two-thirds of Republicans want their party to “Stand up to Obama, even if it means getting less done”.

Second, fairly or not, there are a number of ways one can critically frame Obama: aloof, indecisive, unfocused and incompetent have all worked. Dictatorial does not. If he is a dictator he is not a very good one. He has used his presidential veto less often than any president since James Garfield in 1880 (who served for just 200 days before he was assassinated). He has signed fewer executive orders than any two-term president since Andrew Jackson, who left office in 1837. When it comes to forcing his will on the American people he has been remarkably ineffective. The reason his approval ratings have fallen isn’t because Republicans don’t like him for doing too much – they loathed him before he’d done anything. It’s because his own supporters have lost faith in him doing anything very much – he promised change and has not delivered.

Third, it misinterprets the lessons of the midterms. Republicans claim that it gave them a mandate. To the extent that any election gives the victor a mandate, that’s true. But since neither party campaigned with a policy agenda it’s not obvious what they are mandated to do. In any case, a mandate is not the same as an endorsement. With only 36.3% of the eligible electorate voting, it was the lowest turnout in more than 70 years. And those who did show up weren’t particularly enamoured with the Republicans. According to exit polls, 60% said they were either “dissatisfied” with Republican leaders in Congress or “angry” with them. They were none too keen on the White House either. Republicans won because they managed to rally their base and the Democrats didn’t. There was no electoral realignment. Stewardship of the polity changed, the ideology of the country did not.

Finally, of all the issues on which Republicans might present an ultimatum, this is about the worst. Immigration reform is like kryptonite to them. They can’t rally their base without opposing it, and can’t expand their base without embracing it. If they continue to stonewall, they risk alienating the fastest growing section of the electorate, while appealing to that part of it that is steadily shrinking.

“Latinos would be a more diverse voting bloc if there were reasons to vote Republican,” explains Christine Sierra, head of the University of New Mexico’s Southwest Hispanic Research Institute. “But without those reasons it’s possible they could become as cohesive a voting bloc as African Americans.”

The impact of immigration reform on voting cannot be overstated but can be misunderstood. It is not necessarily the single most important issue for Latinos: the economy and healthcare both took precedence according to exit polls, and 54% of Latinos say a candidate’s opinion on immigration reform is not necessarily a deal breaker. But people who get it wrong are unlikely to get a hearing about anything else.

Which brings us back to Adam Kwasman, whose actions that day stand as a pathetic metaphor for Republicanism: running around, clueless, issuing threats in the absence of solutions, and screaming at the future as it passes him by.