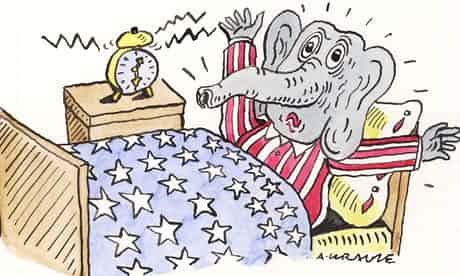 Republicans, welcome to the reality-based community
The Guardian,
Illustration by Andrzej Krauze

Dick Morris's twitter feed on election night was a thing to behold. The day before the presidential election Morris, a rightwing pollster, analyst and Bill Clinton adviser, told Fox News: "Romney will win by a very large margin. A landslide, if you will... I think he'll get 325 electoral votes." (Romney lost with 206.) A week earlier he said his "personal hunch" was the Republicans would take the Senate with 53 seats. (They lost, with only 45.)

When the results came he was kind enough to share his transition from hubris to humiliation in real time.

He started the night confidently:

So far I see nothing to disabuse me of the notion that Romney will win by a lot. Nothing to confirm it either

But there is still Ohio and Wisconsin (and Minnesota)

All went to Obama.

Virginia looks good up by 4 with 3/4 counted

That too went to Obama.

Watch Colorado. If we win [Florida] and Ohio and Va it will come down to Colorado

They lost them all.

Then nothing. Within half an hour the networks called it for Obama.

"If you beat your head against the wall," the Italian Marxist Antonio Gramsci once wrote, "it is your head that breaks, not the wall."

On election night Morris's head exploded, leaving shards of baseless braggadocio scattered across cyberspace. Reality will do that, sooner or later. For Republicans it has been later. For some time now they have been bingeing on everything from climate change denial to creationism. But in the last four years they outdid themselves with birtherism and death panels, insisting Obama was a Kenyan imposter imposing European values. Believing they were entitled to their own facts, they started to believe their own spin. Morris was merely the most bullish illustration of a broader derangement. The rot went all the way to the top. On election night Romney had $25,000-worth of fireworks all ready to launch on the Boston Harbor and a transition team of 200 waiting in the wings.

Finally it appears defeat has sobered some of them up, forcing a rift between those willing to engage with the world as it is and others who prefer dystopian visions, woven from whole cloth. Over the past few years Republicans presented a united, impenetrable front guided by the latter. Now the party's pragmatists, who laid low for fear of Tea Party retribution, seem to be slowly finding their voice.

The best example is Obamacare. The new law decrees that by 14 December states should have laid out their plans to set up a local health exchange. If they don't the federal government will impose one. In many states Republican leaders dragged their feet in the hope of a Romney victory. Now open battles have broken out among conservatives about how to proceed. In Mississippi, the Republican insurance commissioner and governor have each sent a letter to Obama's health and human services secretary: one applying for an exchange, the other expressing opposition to it. "We should not give in to the Obama administration on this," the governor reportedly told the commissioner. "You cannot trust them." The commissioner is going ahead anyway.

Similar tensions, though less pronounced, are emerging over immigration. Respected Republicans are working with Democrats on a bill while others are trying to use the courts to block Obama's recent executive order to normalise the status of young Latinos. They strongly oppose anything that smacks of comprehensive reform. Five years ago John Boehner described George Bush's reform bill as "a piece of shit". Last month he said he was "confident he can find common ground" with Obama on the subject.

On the most pressing issue, the so-called fiscal cliff, there has even been some movement. Last week one senior Republican congressman came out in favour of Obama's tax deal. He was immediately shot down by the leadership. Four others have since followed.

These developments should not be exaggerated. It's a chink not a gash, creating a trickle not a flood. The motivation for breaking ranks owes more to strategy than ideology.

In Kansas, where the Republican governor and state commissioner are also at loggerheads over healthcare exchanges, the commissioner explained to Politico. "I think [refusing to set up the exchanges] is about politics. There's still a feeling with some conservative governors around the country that somehow not participating will cause this program to fail." This preference for failure and denial over engagement and negotiation was a hallmark of the Republicans' approach to Obama's first term. But saying no to everything isn't going to work in the same way now the nation's said yes to Obama.

In 2004 a Bush aide (widely believed to be Karl Rove) derided a journalist for working in the "reality-based community", poking fun at people who "believe that solutions emerge from your judicious study of discernible reality". Like a cartoon character who can keep running off a cliff into mid-air as long as they don't look down, that approach was time limited. Now comes the fall. And as Dick Morris might tell you, the descent can be dizzying and the landing hard.

follow on twitter
RT @TalawaTheatreCo: Hey! We're looking for new young trustees aged between 18 and 25. Join us, and help shape the future of Talawa. All d…
RT @RSLiterature: To kick-off our #LiteratureMatters #RSL200 Autumn/Winter events, join @DavidHarewood & @GaryYounge live @britishlibrary t…
RT @gavinesler: The prime minister of the United Kingdom in his own words ….
RT @EuceEsc: We are so excited to announce that during Pitt's #InternationalWeek2021, Gary Younge will be (virtually) delivering the 2021-2…
There are so many wonderful things about this photograph. https://t.co/w46AJycfA1
@DavidHarewood @britishlibrary Can I have your pies?
RT @DavidHarewood: @DavidHarewood /@garyyounge It’s ON! See the heavyweight battle everyone’s talking about! @britishlibrary for ONE night…
@carysafoko @DavidHarewood @britishlibrary Spite. It’s my superpower
Very much looking forward to being in conversation with @DavidHarewood at the @britishlibrary in London on October… https://t.co/ccIdLj0jU8
RT @typemediacenter: For @BritishVogue's September 2021 issue, Type Fellow @garyyounge spoke with the Barbados Prime Minister @miaamormottl…
© Gary Younge. All Rights reserved, site built with tlc
Buy discount vardenafil Buy sildenafil generic online Tadalafil online us Where can you buy cialis Buy valtrex online with free samples Antabuse buy How to get a cipro prescription from your doctor