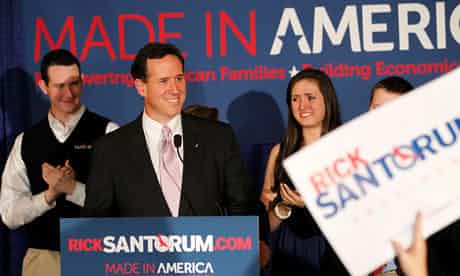 Finally, the Republican primary season has a nominee. Not for the presidency – the results from the Deep South on Tuesday night mean that contest will drag on and may, indeed, now intensify – but for conservative standard-bearer.

Rick Santorum and Newt Gingrich have vied for the spot, passing the baton back and forth since Iowa, splitting the hard-right vote as each claimed that they alone could defeat first Mitt Romney, and then Barack Obama, if only the other got out of the way.

With Santorum winning both Mississippi and Alabama, that battle has now been settled. Republican states don't come much redder than this. (A poll released earlier the previous day (pdf) revealed that one in five Alabamians and more than one in four Mississippians believe interracial marriage should be illegal.) Having won in the Midwest, Santorum can now claim that his appeal has both the breadth and the fervour to mount a serious challenge to Mitt Romney. The mantle is his; he will, without doubt, wield it vigorously.

For Newt Gingrich, second in both states simply wasn't good enough. He had to win. After last week's victory in his native Georgia, and previously in South Carolina, he argued the South was his. Now it has rejected him, it is difficult to see the point of Gingrich staying in the race. His candidacy was never particularly viable; now, it is not even credible.

Whether he pulls out and when is not just a matter for him. If his financial backers – and particularly, Vegas money-man Sheldon Adelson – believe it's time for Gingrich to retire, then the decision will be made for him.

For the first time in a long time, Mitt Romney was off the hook. The fact he finished third in both races raised few eyebrows. He was accused of lowering expectations when he said: "I realise that [the South] is a bit of an away game."

In truth, there were not a lot of expectations to manage. Republican candidates who are considered too moderate for Minnesota are not likely to be sufficiently conservative for Mississippi. The fact that he came as close as he did was a shock, until you realise that he outspent Santorum by five to one in Alabama and three to one in Mississippi.

If this were just about delegates, as Romney now suggests, then he would have absolutely nothing to worry about. His victories in the tiny islands of Guam and the Northern Marianas at the weekend, and his likely win in Hawaii Tuesday, will likely give him a net margin of delegates that will more than compensate for the close races he lost last night.

But it's not just about delegates. Romney's proven inability to rally the party behind him frames him as the nominee not by acclaim, but by default. And with Gingrich out of the way, Santorum now has a clear run at Romney. That's not to suggest that all of Gingrich's votes will go Santorum's way. But if he had won just two thirds of Gingrich's share, Santorum would have won both Michigan and Ohio (even if Romney got all the rest).

That doesn't mean Santorum will win. But it does raise the likelihood of more humiliation for Romney down the road. The American South has a history of embracing lost causes and calling them noble. From the Alabama Activity Center in Montgomery, Alabama, where Rick Santorum ended his southern campaign on Monday night, you can see the spot outside the capitol building where Jefferson Davis stamped his foot and declared an independent Confederacy in 1861.

It's the same place where former Governor George Wallace promised "segregation now, segregation tomorrow, segregation forever". Across the road is the courthouse where the state's chief justice placed 2.5 tonnes of granite displaying the ten commandments, which was only removed after the US supreme court ordered it.

In his final pitch, Santorum evoked the rule of William F Buckley, the late titan of American conservatism, that "we should support the most electable conservative candidate in any given race." Polls suggest that Santorum is not the most electable. But in a week when Obama's approval ratings wobbled, and gas prices kept going up, that doesn't necessarily mean he's not electable.