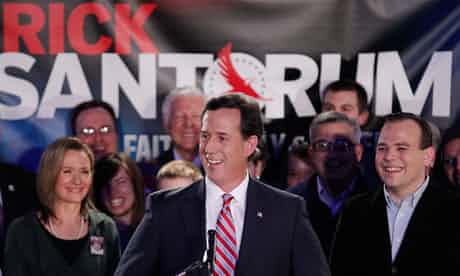 The secret to surging this Republican primary season, like the secret to a good joke, is timing. For most of the last year, Rick Santorum has virtually been living in Iowa and the Iowans didn't seem to care. Religious conservatives and Tea Party followers fell in and out of love with Michele Bachmann, Rick Perry, Herman Cain and Newt Gingrich. Each time they were propelled to frontrunner status their lead would bring the kind of scrutiny a future presidential nominee might expect. And each time that was enough to send them back to the second tier.

For most of the race it seemed as though if Santorum were the last rightwing man on Earth, rightwing Iowans wouldn't vote for him. Until, that is, he became the last rightwing man on Earth not to be called Mitt Romney that Iowans could vote for. Then he surged, giving Iowans the chance to give him a second look but denying any broader examination of his record. It's like the Tea Party sponsored lots of hares but threw in a tortoise as well just to make sure.

His close-fought second place in Iowa does two main things. First, it forces the Tea Party to settle on a candidate. Whether he is viable or not remains to be seen. Iowa has picked the nominee in just two of the last five contested primaries; and only one of those went on to win the election. The fact that it took so long for the Republicans to warm to him should give pause for thought. For all the rejoicing, he is the conservative's default candidate.

And he may look no better than other conservatives when he falls under the spotlight. Santorum has compared homosexuality to bestiality and incest. In 2003 he said he believed mutually consenting adults do not have a constitutional right to privacy with respect to sexual acts and wants to annul all the gay marriages that exist. He has also displayed racial insensitivity, arguing on Sunday that he was opposed to entitlements because he didn't want to "make black people's lives better by giving them somebody else's money".

His ability to scare moderates is proven. The former senator of Pennsylvania, an important swing state, he lost his bid for re-election in 2006 by an 18-point margin – the largest in the state's history. But over the next week or so he can expect more loyalty and money from a conservative wing that has been quite promiscuous. Perry, who came fifth in Iowa, is going back to Texas to "reassess his campaign". Bachmann, who came sixth, swiftly announced her withdrawal from the White House race. That's more than 10% of the Republican electorate nationally who were already unperturbed by questions of electability who Santorum might attract.

That brings us to the second point: Santorum's rise (as opposed to Ron Paul's, whose support is unlikely to broaden) will force Romney to run, rather than stroll, to the nomination. Had he won handily it would have effectively wrapped up the nomination. Had Paul won, it would not have made a big difference to his own trajectory. But Santorum he will have to take seriously, as he did Gingrich. It also confirms the impression that Romney is not the Republican frontrunner by choice but by default. True, he spent very little time in Iowa until the very end. But Republicans haven't had a field as weak as this since 1996 and he still can't break 25% in a swing state the party will want to win back against Barack Obama come November. Polls suggest his inability to break 25% is not a local problem. Republicans are just not that into him.

So we have two default candidates, both at the front of the pack because, despite great efforts, their respective sides could not find anyone better or more viable.

The real big winner in all of this is Obama, who can now look forward to Republicans spending more money fighting each other, either to nominate someone unelectable or bloody the best prospect they have, only to end up with a candidate they don't really like. For the next month at least it's a two-horse race; the trouble is, both nags are lame.

• This article was corrected on 4 January 2012. Rick Santorum lost the Pennsylvania senatorial election in 2006, not 1996, as originally stated