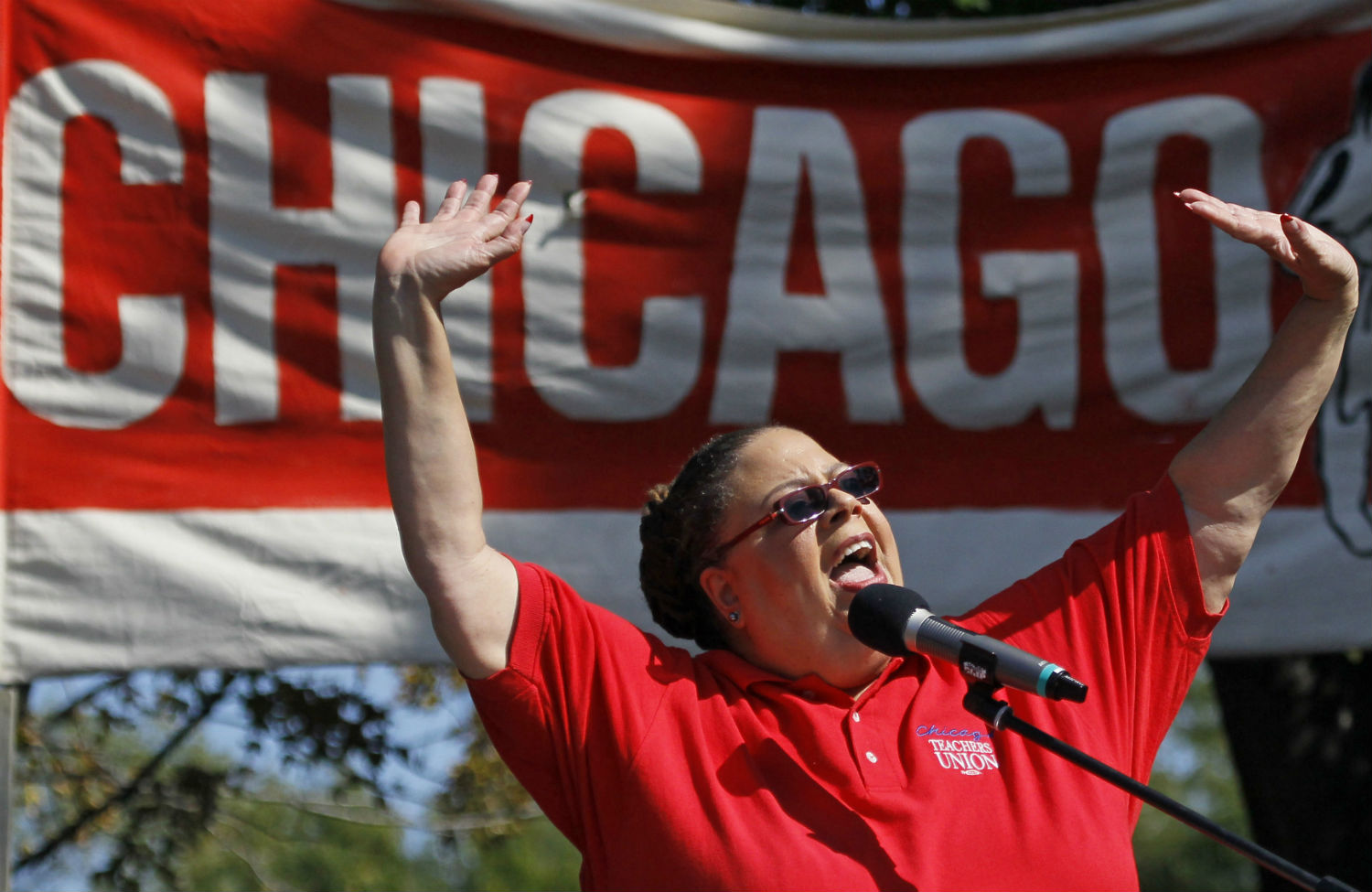 On August 5, at a Young Chicago Authors event, Mayor Rahm Emanuel read the late Maya Angelou’s “Still I Rise.” A poem so explicitly written in the voice of a black woman (“Does my sexiness upset you? / Does it come as a surprise / That I dance like I’ve got diamonds / At the meeting of my thighs?”) must have sounded odd coming from his lips.

And yet politically, if not aesthetically, the choice made perfect sense. For as the mayor was channeling one black woman, he was desperately trying to neutralize the challenge of another. A poll a few weeks earlier had given Chicago Teachers Union leader Karen Lewis a nine-point lead if she ran against him for mayor; another poll a week after the reading gave her a four-point lead—narrower, but still beyond the margin of error.

Lewis has long been Emanuel’s nemesis. She led a successful teachers strike in 2012 and vigorously opposed his decision to close more than fifty schools in black and low-income neighborhoods. There is no love lost between them. When she fought him over lengthening the school day, he told her: “Fuck you, Lewis!”; the week before the strike, Lewis called him a “liar and a bully.” Now they could be facing off for the one job that Emanuel—previously Obama’s White House chief of staff—said “could have pried me away from the president’s side.”

It’s not difficult to see why Emanuel is vulnerable. True, he cleared the snow in the winter, the Chicago equivalent of making the trains run on time. But beyond that, his neoliberal policies have made him a lot of enemies.

His problems go beyond policy to personality. Put bluntly, people don’t like him. Abrasive, divisive and arrogant, he seems to have brought the worst of Washington to a city that has come to prefer a more consensual—if occasionally crooked—style of leadership. Chicagoans felt they had ownership of the last mayor, Richard Daley, and that, for all his flaws, he was devoted to them. He had no pretensions beyond the city. There is a sense that Emanuel sees City Hall as a steppingstone to something bigger and better—even if it’s not clear what. “Daley…knew the streets, he knew the drivers of the garbage trucks, he knew the tree trimmers, he knew their parents,” an official told Kari Lydersen for her book

. “Rahm has no clue who the drivers are, and he doesn’t care…. But you ask him who the head of the Chicago Mercantile Exchange is, and he’ll have him on speed dial.” Polls suggest that Emanuel is unpopular with every ethnic group, particularly African-Americans. His approval ratings are down to 35 percent; his disapprovals are above 50. Lewis, meanwhile, is popular among union households, African-Americans and the young.

follow on twitter
RT @nytimes: A Black professor who studies housing discrimination had his house appraised: $472,000. He then did a “whitewashing experiment…
RT @MCRSociology: Gary Younge discusses identity politics and America with Will Hutton in this episode of @thewesocietypod https://t.co/72…
RT @mart_welton: Congratulations to all those getting their A-level results today. If you have BBB at A-level or above you can still apply…
RT @BernardineEvari: Please follow the groundbreaking online #MuseumofColour UK, founded by the unstoppable Samenua Sesher. The 1st gallery…
RT @EthnicityUK: Gary Younge is interviewed by @sonikkalogan about his work on racism and gun violence in @the_hindu #DataPoint podcast. h…
RT @thefreedomi: 🚨 NEW: Saudi women’s rights activist & academic Salma al-Shehab was sentenced to 34 years in prison + 34 year travel ban f…
RT @LRB: #DawnFosterForever! On Thursday 15 September at the @LRBbookshop, @BizK1, @piercepenniless, Lynsey Hanley and @garyyounge will d…
RT @ShowunmiV: This is how we support Black women and girls https://t.co/8YmgV21zHo
RT @sonikkalogan: It's #DataPoint Pod Thursday! In this week's episode, I talk to @noraneus, @garyyounge and @Casey_J_Wooten about the U.S.…
RT @bgnoiseuk: Next month, @LRBbookshop will host an event to celebrate the life and work of Dawn Foster with @BizK1, @piercepenniless, Lyn…
© Gary Younge. All Rights reserved, site built with tlc
Buy azulfidine pill Get bactroban prescription Low price glucotrol Generic samsca cost How to get protopic Paxil cr best price Buy antabuse Can i buy hytrin How to get zyloprim in the us Generic tasigna online for sale