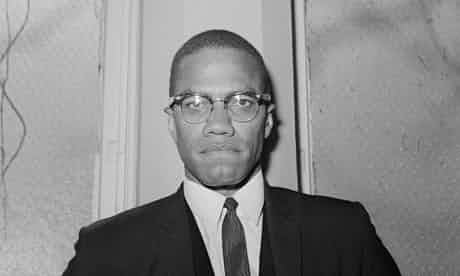 Playboy's timing couldn't have been better. In this interview in May 1963 it caught Malcolm X at the pinnacle of his most combative black nationalist phase and America in the grip of racial turmoil. Within a year Malcolm X had repudiated almost every stance in the interview. He had broken with the Nation of Islam movement, fallen out with its leader Elijah Muhammad, renounced black supremacy and embraced racial equality, human rights and pan-African solidarity. Within two years he would be assassinated in Harlem's Audubon Ballroom.

But in 1963 he remained wedded to both the race-based, homegrown theology and cultish organisation. As such Malcolm X was always well aware of his shock value to white America. The interview took place over several days. After delivering a particularly fierce diatribe against whites or Christians, he sometimes almost dares interviewer Alex Haley to censor him. "You know the devil's not going to print that!" he said.

Playboy was more than happy to publish his statements verbatim. The magazine knew its readership well and understood the mawkish fascination an interview with a black nationalist like Malcolm X would hold. "Many will be shocked by what he has to say," wrote the editors in defence of publication. "Others will be outraged."

But there were yet others, out there in black America, who sympathised with Malcolm X's defiant and unapologetic attitude even if they did not agree with his specific agenda. As the magazine hit the stands, Martin Luther King was in jail in Birmingham, Alabama, from where he wrote a letter to local clergy who had branded his demonstrations in the town as "untimely" and "unwise". "For years now I have heard the word 'Wait!'" wrote King. "It rings in the ear of every Negro with piercing familiarity. This 'Wait' has almost always meant 'Never'. We must come to see, with one of our distinguished jurists, that 'justice too long delayed is justice denied'."

King gave voice to the impatience. Malcolm articulated the rage. And there was plenty to be angry about. The year had started with Alabama governor George Wallace stamping his foot on the entrance to the statehouse and declaring: "I draw a line in the dust and toss the gauntlet before the feet of tyranny ... and I say segregation now ... segregation tomorrow ... segregation forever."

Before the year was over, police in Birmingham, Alabama, had turned guns and hoses on black demonstrators seeking the vote and the Ku Klux Klan had firebombed a black church killing four little girls at Sunday school. In between all of that, King had made his "I have a dream" speech on the steps of the Lincoln monument.

A Newsweek poll taken shortly afterwards showed that 3% of African-Americans and 74% of whites believed that "Negroes were moving too fast". Reasonable demands for civil rights made by reasonable people did not appear to have impressed on white America the urgency to resolve the issue. In Malcolm's eyes it didn't matter if they found him unreasonable or not. Indeed at this stage in his life you get the impression that he didn't feel he was doing his job properly unless he was scaring white people out of their skin.

A pornographic magazine seems an odd outlet for an ascetic soul like Malcolm X. Yet over the years the Playboy interview had snagged some unlikely characters including Bertrand Russell, Jawaharlal Nehru, Muhammad Ali (twice), Martin Luther King, Fidel Castro (twice), Daniel Ortega, Bernadette Devlin and Billie Jean King. And by all accounts Malcolm X was pleased with the outcome. For if the interview came at a crucial time in American racial history and Malcolm X's life, it also proved a pivotal moment in the relationship between him and his interviewer, Alex Haley. Haley, who later wrote the blockbuster slave narrative Roots, had jumped through hoops to secure an interview for Reader's Digest a few years earlier. When they first met, Malcolm X said: "You're another one of the white man's [agents] sent to spy!" Haley had to fly to Chicago and have dinner with Elijah Muhammad before the interview could be granted. Malcolm X was happy with Haley's work and after the interview began to collaborate with him. "He was most aware of the periodicals' power, and he had come to regard me, if still suspiciously, as one avenue of access." It was the start of a mutually beneficial doubleact. He started to tip Haley off if he was going to say something newsworthy. Not long afterwards he would tell Haley his life story, which became his bestselling autobiography. When Malcolm signed the contract for the book he told Haley: "A writer is what I want, not an interpreter." In Haley that is what he always got.