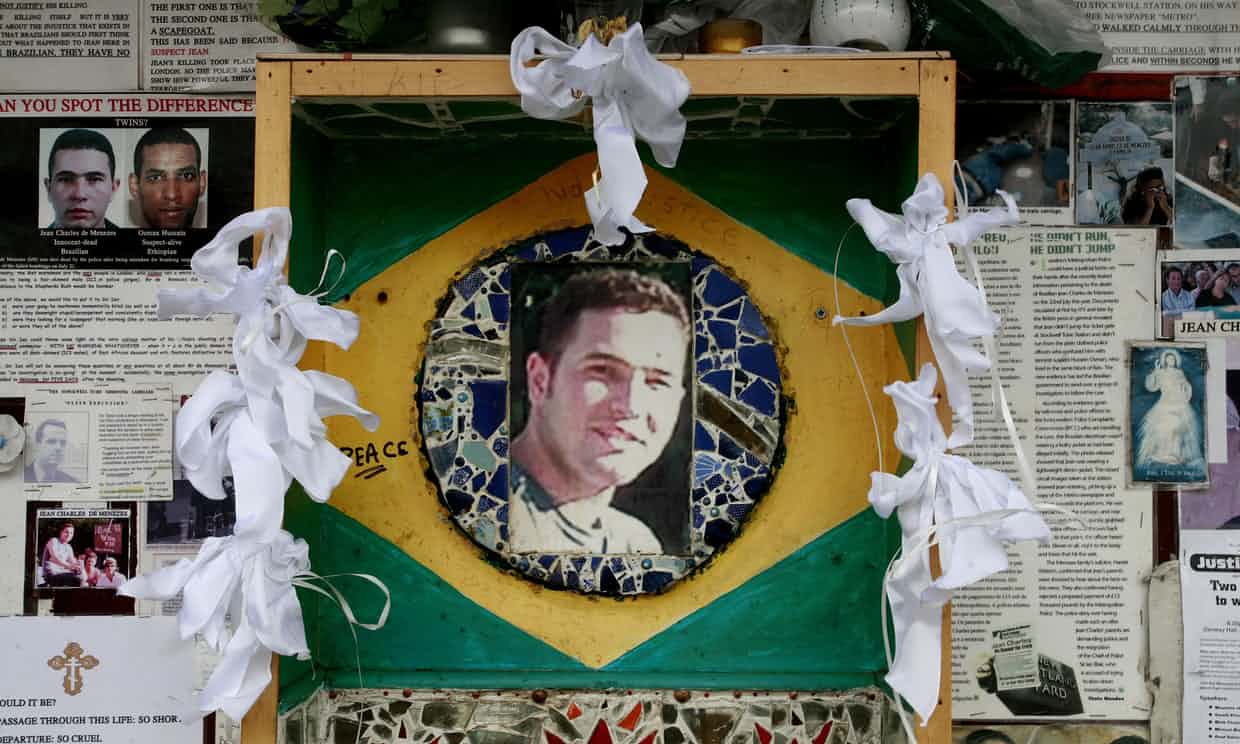 The descriptions varied. Officer Frank assumed he was “a white man”, but thought: “It would be worth somebody else having a look.” Officer Ivor believed he had “Mongolian eyes”; Officer Harry said he was “acting in a wary manner”; Commander Dick thought him “very, very jumpy”. But a consensus soon emerged: he was a jihadi about to blow up London’s tube.

Within an hour the descriptions were unanimous. He was a dead man. How could he not be? The police had put seven bullets in his head. Within 24 hours a new consensus was taking hold. They had all been completely wrong. He was not off to spread terror through the capital, but to fix a broken fire alarm in Kilburn. He was not a terrorist, but a 27-year-old Brazilian electrician. His name was Jean Charles de Menezes.

Any shoot-to-kill policy inevitably rests on the presumption of guilt, often of a crime that has not yet taken place. In the most literal sense of the word, such policies are based on prejudice – a judgment made about who someone is and what they might do, prior to any evidence about either. Those presumptions do not come from nowhere. They are rooted in an array of received wisdoms – a constellation of probabilities, generalisations, bigotries, calculations, likelihoods, falsehoods, archetypes and stereotypes. Judgments are made through the crosshairs of a firearm. The verdict is always the same – death. There is no leave to appeal.

In the stampede to defend and extol western values – whatever they are – against the onslaught of barbarism, it should be recognised that the principles of freedom and equality have never applied to all in the west except in the most formal sense. The criminalisation of communities of colour (and the Irish in Britain) long preceded the war on terror and will, unfortunately, survive it.

Fascism is once again a mainstream ideology in Europe, and Muslims are among its principal targets. Knowing what the odds are for black and Muslim people to be stopped and searched, the ramifications of a “don’t stop, just shoot” policy do not bear thinking about. “Terror,” explains the anthropologist Arjun Appadurai, in Fear of Small Numbers, “opens the possibility that anyone may be a soldier in disguise, a sleeper among us, waiting to strike at the heart of our social slumber.” If such an atmosphere prevails, every brown skin will be just a “cleanskin” (an undercover terrorist not known to the police) waiting to happen – and the #blacklivesmatter slogan will shift from an issue pitching civil rights advocates against local and federal US law enforcement to one of global, geopolitical inequalities.

The young man with a backpack might be late for football. Once he's been shot, it’s too late to find out

Those who might insist that racial sensitivity is a luxury we cannot afford at such critical times should realise that it is precisely the trust of black and Asian communities that is most needed to combat this particular fundamentalist scourge. Moreover, if unity against terror is genuinely what we are aiming for, it cannot be achieved by forcing some to live in terror of the state so that others can enjoy the illusion of security – we’re either all in this together or we’re not. Finally, the murder and humiliation of innocent people abroad at the hands of western forces is partly what has brought us to this point, helping to mobilise large numbers of disaffected Muslim youth. Being as callous and careless at home as we have been abroad will hurt, not help.

In moments that are clear cut – where a terrorist is pointing a gun at civilians or stands up, shouts a slogan and pulls a cord from a smoking vest – few (including, I would imagine, Jeremy Corbyn) would argue with the proposition that they should stopped by any means necessary, including lethal force. British police already have the right to use reasonable force if they believe somebody poses a threat to his or her life, or to the life of others.

But it is worthwhile pointing out that in the most high profile of such moments that have occurred, the assailants were apprehended (usually by civilians) using non-lethal means. The shoe bomber of 2001, the underwear bomber of 2009 – both of whom were caught trying to blow up aeroplanes in mid-flight – and the man who opened fire on a train in France in August this year were all overpowered by other passengers or crew. All were stopped and could expect to stand trial. If it is a way of life that we’re defending, then – even when it is not possible – this must nonetheless be the preferred outcome.

But situations are rarely that clear. The young Asian man running through the city with a backpack might be late for a football match; the woman in the hijab on the bus looking nervous and talking to herself might be on her way to an interview or an exam. You just don’t know. And once they’ve been shot, it’s too late to find out.

Police officers thought that De Menezes looked suspicious because he changed buses and looked fidgety, which is apparently how a well-trained terrorist would behave. It turned out he switched buses because the tube stop was closed, and was on edge because he was running late for work.

And when people are refracting their impressions through a lens of fear they rarely see straight. De Menezes was shot two weeks after jihadis had attacked tube trains and a bus in central London and a day after the failure of another plot. People were understandably jittery. Initial witness reports said that De Menezes was wearing a suspiciously large padded jacket on a hot day, had vaulted the ticket barriers, and kept running when asked to stop.

Anthony Larkin, who was on the train, said he saw “this guy who appeared to have a bomb belt and wires coming out”. Mark Whitby, who was also there, thought he saw a Pakistani terrorist being chased and gunned down by plainclothes policemen. Less than a month later, Whitby said “I now believe that I could have been looking at the surveillance officer” being thrown out of the way as De Menezes was being killed. The Pakistani in a padded jacket turned out to be a Brazilian in a light denim jacket who picked up a free paper and swiped his Oyster card.

We would all rather be safe than sorry. The problem with a policy such as shoot-to-kill is that its potential to make us safe is dwarfed by the likelihood that it will make us sorry.