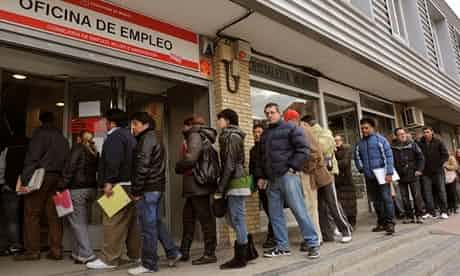 Spain's unemployed: one in five under 30 still looking for that first job
The Guardian,
Photograph: Denis Doyle/Bloomberg via Getty Images

Tomorrow Jesus, 34, is off to Shanghai. His career in international development ran aground after the Spanish government slashed its budgets. The job, for which he was overqualified, became too irritating. So he's heading to China, where he has Spanish friends, with a return ticket that he hopes he'll not have to use for a few years.

"China is like a very optimistic film. It seems like a place where there are a lot of opportunities," he says.

Very few people of Jesus' age are saying that about Spain. At 43%, Spain's youth unemployment is the highest in the EU by far, and more than double the average. For those aged 16 to 19 the rate is 64% – an 11% increase on the previous year. One in five of those under the age of 30 are still looking for their first job, and almost half (46%) are on short-term contracts of less than 6 months.

Youth unemployment here is higher than in Tunisia and Egypt. It's so high that many young people have to look long and hard to see past it.

When I asked a class at an unemployed training centre who would be prepared to leave the country to find a job they all raised their hands. All said that the majority of their friends were also unemployed.

Outside the unemployment office in the shadow of the Real Madrid stadium, where a queue snakes for 70 metres outside before the venue opens, Victoria, 26, waits patiently in line. It's been half a year since she worked as a receptionist. Since then she's been getting by with the help of her parents. "I want to work in audio-visual communications. But I will take anything. Things are very difficult right now. I hope things are going to get better. But I don't really know how."

Almost every young person I spoke to believed their lives would be harder than their parents.

"This is the least hopeful and 'best education' generation in Spain," says Ignacio Escolar, 35, author of the country's most popular political blog and former editor of the newspaper Publico. "And it's like a national defeat that they have to travel abroad to find work."

Unlike the Spanish emigration patterns of the 1960s and 70s, when low-skilled workers left in search of work, most of those leaving this time are well-educated.

A series on the subject in the autumn by the daily newspaper El País prompted hundreds of letters.

One wrote: "When I was a kid, my parents used to tell me, 'we weren't able to study because we had no money, so you must study to avoid ending up like us'. I did what they said, and today, in my 20s, with a university degree, a masters, and several other qualifications, along with too many grants from big companies, I am unemployed."

Another wrote: "I have a university degree. I have a good job, a good salary. I live in a house with a garden. How can this be? I left Spain when I was 23."

Ignacio Prada, 25, who has two masters degrees, left for London a few months ago to work as a barman. He earns more doing that than he would do in an entry-level job, which would in any case be very difficult to come by.

"I live like a rat there so I can save money and learn English," he says. "To be honest I never tried to get a job here. There are jobs, but the quality is not very high. I have friends who have economics degrees who are working at a cash register. I definitely feel part of this lost generation."

As dramatic as the statistics sound, there is little evidence of a sense of urgency or outrage.

Two weeks ago in Portugal a Facebook group called Desolate Generation staged a 150,0000-strong demonstration in Lisbon with tens of thousands turning out elsewhere in the country. In Greece, Italy and Britain, students have been out on the streets. But Spain's young remain relatively quiet. "When I took part in the general strike last year most of the people involved were quite old," says former student leader, Iñigo Errejón, who is 27.

It is not just the youth that appear docile. A demonstration against the austerity measures while I was in town could not fill the Puerta del Sol, Madrid's central square. Jesus, leaving for a final dinner with his family, and Ignacio, admitting he's homesick, still both say they are optimistic about Spain. So do all but one of the unemployed at the training centre.

Electorally, most expect an increase in voter abstention among young people at the next elections. While British youth invented punk, and black America created hip hop as popular cultural responses to economic crises in previous decades, there seems to be little evidence that resistance is being expressed in other ways beyond trying to forget all about it.

Spain has one of the highest rates of cannabis and cocaine usage among its young in western Europe. The botellón, the social activity for younger people of drinking alcohol in public areas such as the streets, also increased in popularity until recent police clampdowns.

Some on the political left struggle to explain the indifference. "We're very worried about this," admits Cristina Bermejo, a representative of the youth wing of the CCOO union. "People look like they're asleep and the disaffection is also directed at us in the unions."

At the student union 20-year-old Carmen Aldama thinks people are "apathetic". Errejón, 27,  believes the young are de-motivated by the consensus in the political culture at a time when the governing Socialist party is implementing cuts. "There is anger, but it's not political anger. In fact it's anger directed against the political class because all the politicians look the same. So it becomes cynicism."

Errejón also thinks that his generation bears the burden of failing to live up to the achievements of its parents' political past. "They say, we are the generation that brought about transition from fascism to liberal democracy. What have you done? What are you doing? We had mass movements. What are you going to be able to teach me if I can fight and defeat a dictatorship?"

But others say that the reason Spanish youth seem so relaxed is because the severity of the situation has been overstated.

"There are two explanations," says Juan Díez-Nicolás, a sociology professor and pollster. "First, there isn't 43% youth unemployment – 20% of the Spanish economy is underground and a large proportion of young people work in it. Second, the family, which, in Spain has been the cushion that has softened the blow of the impact of the economic crisis."

The second point is particularly striking. The notion of a comedy film like the American movie Failure To Launch where the joke hinges on the fact that the central, thirtysomething, character has not moved out of the family home, makes little sense in Spain  where 54% of those between the ages of 18 and 34 do still live with their parents. But with a 10% increase in those living at home, the crisis has clearly had an impact.

In many respects the source of Spanish youth's plight is much the same as elsewhere in Europe where the unemployment is twice the general rate, and the crisis has pushed each measurement higher.

"The difference in Spain is related to the productive sector," said Santos Ruesga, economics professor at Madrid's Autonoma University. "Our boom was fuelled by very high levels of construction and tourism. Both are very low-skilled and labour-intensive. When the crisis hit we had a lot of low-skilled people lose their jobs and many of them were young."

Gayle Allard, an economics professor at the IE international business school, says the problem is rigid Spanish labour laws that make it difficult to fire permanent workers. "You have this privileged majority of people on permanent contracts who are very expensive to fire and so have no incentive to be more productive," she said.

"The problem with the youth is that they are coming in from the outside and they can only get temporary contracts, which makes them more vulnerable."

Either way, Spanish unemployment has always been stubbornly high. At the height of the boom it was higher than that in Britain at the depth of the economic crisis.

Education makes a big difference. The ni/ni (neither/nor) group – those neither in full-time education nor employment – are suffering. Among those aged 24 to 29, those with a doctorate are four times less likely to be unemployed than those who left school without qualifications. But with three in every 10 graduates working in a job for which they feel overqualified, even the most fortunate are frustrated.

"It's like there is oil on the streets," says blogger Escolar. "All it needs is a small spark and it could blow."