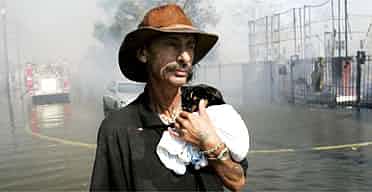 Still alive amid the chaos: rescuers arrive at last to discover the forgotten survivors
The Guardian,
Photograph: Eric Gay/AP

"There's a lady been lying dead for four days and some people just took her away," said Patricia Corie, her immaculately painted sky-blue nails resting on the car window on a corner of Magazine Street as she watched the fire engines arrive to tend to a blazing house. "Now they're coming to help but we've been here all the time.

"The police and the firemen told us we could go into Wal-Mart and take what we needed," said Ms Corie, who has lived in New Orleans for all but 10 of her 57 years. "They were in there, too, helping themselves to clothes."

Joseph Kelson, 58, was bleeding from a bite from a stray dog and seeking medical attention but, despite the presence of more than 20,000 national guardsmen and hundreds of search and rescue teams, none was forthcoming.

"I've lost all my friends," he said. "We waited for help but help never came. I had a few things in my house, chips and snacks and things. I had to stay because I had a crested canary and a big dog - Macho, like macho man - to look after. I wasn't surprised that it took them so long to start looking for people. It's always that way round the ghetto."

Outside Harrahs casino, in a city empty of almost everyone except for police and national guardsmen carrying M-16 rifles, the survivors were gathering to be evacuated. Elizabeth Henry sat with her trolley, apparently oblivious to the bustle around her. "I live in Roman Street which is full of water at the moment," she said. "I think I'll be back in my house in a couple of days once they've cleared this mess up."

But as well as the living, there was also the dead.

"I'm not going to lie to you," said Captain Tim Baynard of the New Orleans police department. "There's bodies." Some had drowned, others were elderly people who had died of dehydration. "We're still concentrating on finding the living," he said. "There are no facilities for the dead here."

Fifty miles from New Orleans, a morgue has been set up in the tiny town of St Gabriel where the number of dead may yet outstrip the population of 5,500. Mobile units started collecting bodies from New Orleans on Monday and residents were asked to stay off the main road yesterday so emergency vehicles could come through.

The official death toll in Louisiana still stood at only 71 while in neighbouring Mississippi, officials said 170 people were confirmed dead. Some bodies had been tied to road signs or electricity poles to prevent them from floating away and many were rotted. Many have decomposed beyond recognition.

In Violet, a small town just east of New Orleans, police found 22 corpses tied together with a rope. They think they were trying to escape the floodwaters together when they perished.

"There is going to be a death toll that will shock the nation," said New Orleans mayor Ray Nagin yesterday. He has already suggested that as many as 10,000 may be the total. A computerised prediction, based on those accounted for, was indicating an even larger figure. But the reality is that very few bodies have been recovered so far.

In the upmarket Garden district, where one resident had spraypainted a triumphal "Looter shot" on the hardboard outside his house, the military went door to door on foot, in boats and helicopters to get people who have been stuck in their homes. National guard helicopters dropped down into neighbourhoods and waited for survivors to come to the choppers. Once filled, the aircraft flew them to safety, then returned again and again to the same place until there were no people left to take away.

Soldiers from the US 82nd airborne division marched through town in formations of 12 in what they said was a show of force to the criminal gangs that ran wild in the streets, looting and shooting, in the days after Katrina. While almost everyone on the streets yesterday was in uniform of one kind or another, those who stayed and were surfacing in the French Quarter were mainly those who have grown accustomed to being on the margins.

Steve Goss, a fashion designer, returned home to his flat on the French Quarter with a trolley full of bottled water and other provisions. "It's getting harder and harder to get things to eat," says Mr Goss, who came to New Orleans a few years ago to live with his partner. "But I can't leave because I have three dogs. I've heard the military are shooting dogs and I could not leave my babies to that." Hans, Franz and Wilhemina were holding up well, he said.

The authorities have ordered everyone to leave the city and have been forcing people from some buildings at gunpoint. Mr Goss is among an estimated 10,000 who remain in the city and plan to stay for as long as they can.

"They'll have to take the dogs with me. I'm not just going with the shirt on my back. I'm taking lots of shirts, lots of pants and my Gucci shoes," he said.

In St Gabriel, some residents of this poor, mostly black town, felt their community had been used as a dumping ground. "You look at what colour lives here. What their economic situation is. There's plenty of empty land in Louisiana. Why put [the morgue] here?" one woman asked the New York Times.

But most appeared unconcerned. "I wish it didn't have to be here but only because I wish we didn't have these circumstances," said Amanda Talbert who lives just a few yards away from the mass of police cars at the entrance to the morgue.

The sign on the entrance to the morgue's assessment area had a message for those outside Harrahs who had gambled and been lucky. "Mortui Vivis Praecipant," it read. Or: "Let the dead teach the living."

follow on twitter
#JosephineBaker ceremony in Paris https://t.co/M8gg06zfTl
RT @SynergiCC: On Thursday, watch out for the release of @JamesNazroo's presentation on #BLM, #racism and #health harms in the UK. #FromPle…
This is basically the thread I put out last night...but soooo much fancier-looking. https://t.co/bWUIGEmtBY
@tjr_london In Paris for the Josephine Baker ceremony I'm afraid.
RT @BritishVogue: As she leads Barbados towards republicanism, charismatic Prime Minister Mia Mottley talks to @GaryYounge about shaking of…
RT @MCRSociology: As #JosephineBaker is elevated to the pantheon today, @garyyounge writes on race, racism and republicanism in contemporar…
@PriyamvadaGopal Thanks @PriyamvadaGopal . Where would I find a comprehensive account of that conference or start l… https://t.co/40Ud2rS6Kj
"African Americans enjoyed an honorary, if contingent, racial status: free to write about racial atrocities in Amer… https://t.co/vRobBofK5D
@chakrabortty What a lovely message. I miss those days. I miss you (not sure I miss the office as such. In Farringd… https://t.co/eviENdkaAp
6/ "Mine is a name with a story from afar, that doesn’t have to be told, that is not often misspelt and that doesn’… https://t.co/F47tepvsxY
© Gary Younge. All Rights reserved, site built with tlc
Buy discount vardenafil Buy sildenafil generic online Tadalafil online us Where can you buy cialis How to get a cipro prescription from your doctor Buy valtrex online with free samples Antabuse buy