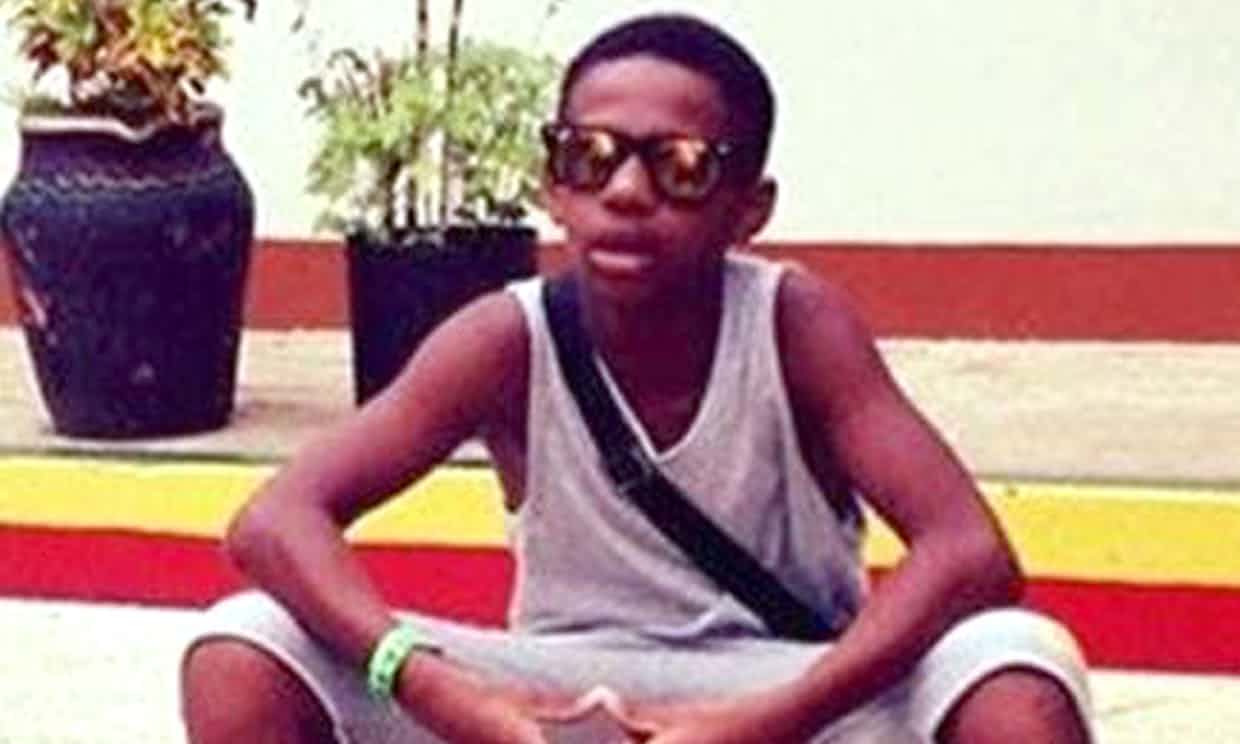 A 15-year-old boy is facing life in prison after being found guilty of murdering another teenager outside the gates of his school. Quamari Serunkuma-Barnes, 15, was chased and stabbed three times by his attacker, who cannot be named for legal reasons, outside Capital City Academy on 23 January.

The attacker waited for Quamari to appear after school finished before chasing him and stabbing him with so much force that he pierced Quamari’s rib and punctured his lung. “I just wanted justice for my son,” said Quamari’s father, Paul Barnes, tearfully after the case.

Quamari, a popular boy who loved old-school reggae artists and dancing, was walking and singing as he left the school in north-west London on Monday 23 January when he spotted his masked attacker and started to run, the Old Bailey heard.

Schoolmates assumed he was joking as he fled through the street, shouting: “I’m sorry, I’m sorry,” “Help” and “I’m getting stabbed”.

His attacker, who was five inches taller than Quamari and had been an accomplished athlete, caught up with him, stabbed him in the shoulder, the back and the upper thigh. After reading out a list of violent incidents in which he was involved, Judge John Bevan QC said: “There is an extremely concerning trend of violence here. It seems obvious to me that he is a dangerous young man.”

The boy convicted of Quamari’s murder was living in south London at the time and had come to north-west London specifically, waiting for about half an hour around the corner from the school. No motive for the attack was established.

“We will never know what made him wait, watch, see, chase and stab with such severity,” said Sally O’Neill QC, for the prosecution, while summing up.

A woman who was driving by seconds after the incident and was one of the first on the scene held Quamari and tried to comfort him as he lay in the road. As they waited for assistance, school students looked on, screaming.

“He said, about three times, ‘I’m going now,’ the woman said, in a subsequent interview outside the court. “And he lay back and I said, ‘No you’re not,’ and I’d squeeze his hand and say, ‘Breathe in through your nose and out through your mouth. Focus on your breathing. Help is coming.’”

Police arrived on the scene almost immediately and an ambulance arrived half an hour later. It was originally thought that Quamari would survive. He joked while he was in the ambulance and while in hospital, where he identified his attacker. The school sent an email to parents saying that he was expected to live, only to inform them the next day that he had died.

With no murder weapon found, the prosecution case hinged on whether what became known as “the dark figure” seen by various witnesses and on clips of CCTV footage was the defendant.

Mobile phone masts established that the killer was in the area at the time. One schoolgirl initially told the police she didn’t recognise him, only to identify him later as someone she had known for many years. In the hours during which Quamari remained alive after the stabbing, he also first said he did not recognise his assailant, but identified him later.

The defence claimed it was only once the defendant’s name had been widely circulated as the assailant that people changed their minds. “This is a case riddled with doubts,” Kirsty Brimelow, QC, told the jury in her summation. “You’re standing between the lynch mob and the law.”

Detective Chief Inspector Jamie Stevenson said many of the children who saw the attack initially assumed the boys were “messing around”. He said: “Little did they know that within a matter of minutes Quamari would be lying helplessly on the ground fighting for his life. Those that witnessed the events have been left completely devastated by the loss of their friend.

“This was a deliberate and planned attack on a defenceless schoolboy as he made his way home laughing and joking with friends. Quamari didn’t stand a chance that day. He was outrun by his attacker, who had an advantage over his victim in that he was an adept runner and was able to quickly catch up with Quamari.”

The killer, who denied the charge, was found guilty by a majority verdict and will be sentenced at the Old Bailey on 4 September.

Judge John Bevan QC thanked the jury for their service in what he called a “difficult and distressing case all around”, with jurors weeping at various times during the two weeks of testimony. “Sadly, this is the kind of case that is all too frequent nowadays,” he said. “When I was practising as a barrister some years ago, this sort of thing was almost unheard of.”

Quamari was the fifth of 21 children to have been killed by knives this year, 10 of whom have died in London. This year the Guardian is marking all of the children and teens who have been killed in knife attacks in the UK in a series called Beyond the Blade. We are following their cases and exploring the themes that emerge where ever possible.

As part of this project, reporters have attended Quamari’s funeral and vigil and spoken to many people who knew him. “He was very funny,” said one youth worker who had seen him the week before he died. “When you first met him, he would come across as very quiet. When you got to know him, he liked to make people laugh. He wasn’t frightened to be himself. If he came into a room full of girls and wanted to do what they were doing, he’d just do it.”

One tribute from a fellow pupil, left at the school gate in the days after his death, along with flowers, balloons, candles and a Jamaican flag, read: “I can see you laughing at my art and craft skills. It was only yesterday you told me how proud you were that I chose drama. You made me think I was beautiful and confident … You stood up for me when no one else did.”

At Quamari’s funeral in March, which was so full that a crowd had to remain outside the church, Father Terry Murray said: “It’s not true to say he was in the wrong place at the wrong time. He was doing what every pupil every day should do. Waiting at a bus stop after school, when dark events happened.”

follow on twitter
RT @MCRSociology: Gary Younge discusses identity politics and America with Will Hutton in this episode of @thewesocietypod https://t.co/72…
RT @mart_welton: Congratulations to all those getting their A-level results today. If you have BBB at A-level or above you can still apply…
RT @BernardineEvari: Please follow the groundbreaking online #MuseumofColour UK, founded by the unstoppable Samenua Sesher. The 1st gallery…
RT @EthnicityUK: Gary Younge is interviewed by @sonikkalogan about his work on racism and gun violence in @the_hindu #DataPoint podcast. h…
RT @thefreedomi: 🚨 NEW: Saudi women’s rights activist & academic Salma al-Shehab was sentenced to 34 years in prison + 34 year travel ban f…
RT @LRB: #DawnFosterForever! On Thursday 15 September at the @LRBbookshop, @BizK1, @piercepenniless, Lynsey Hanley and @garyyounge will d…
RT @ShowunmiV: This is how we support Black women and girls https://t.co/8YmgV21zHo
RT @sonikkalogan: It's #DataPoint Pod Thursday! In this week's episode, I talk to @noraneus, @garyyounge and @Casey_J_Wooten about the U.S.…
RT @bgnoiseuk: Next month, @LRBbookshop will host an event to celebrate the life and work of Dawn Foster with @BizK1, @piercepenniless, Lyn…
Help me Twitter. The quote: ""You can cut all the flowers but you cannot keep Spring from coming." is most commonly… https://t.co/Xs7JkiOEd5
© Gary Younge. All Rights reserved, site built with tlc
Pepcid online without prescription Where is better to buy floxin Buy antabuse canada Get flonase prescription online Generic samsca cost Buy discount vardenafil Bactroban ointment price ph How to get clarinex prescription Eldepryl price per pill Can gabapentin and celebrex be taken together