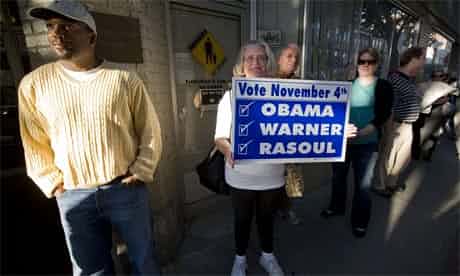 Thank you and goodbye
The Guardian,
Photograph: Sean Smith

So it's over. What started with bluegrass ended with Falstaff.

There have been no more raccoons (although I did see a whole family of five scuttling across Jefferson last week).

And while I confess I am still baffled by the squeamishness of some locals over being associated with bluegrass (I have yet to hear mention of another kind of music that could be associated with the area), I understand much more now why so many are proud of Roanoke and were sensitive to the possibility that it would be maligned or caricatured on the international stage.

The photo gallery that accompanies this piece hopefully gives a flavour of the city in all its glory and gory daily life.

I also stand by my original description of Roanoke as eccentric. One evening I discussed pillaging with a man dressed as a Viking. His beard was plaited and he had an Obama sticker on his helmet. He said the woman with him was not his girlfriend, she just made his mead.

It's not that people didn't notice, but the fact he was dressed as a Viking didn't seem to come up in any conversation. When I brought it up it was like I was the strange one.

It was just one evening; and he was just one Viking. But along with the Obama supporter who wouldn't hear a bad word said about the confederate general Robert E Lee, the drama over the mouse infestation in the city market (did the mayor really compare it to 9/11?) and the lady with the monkey and the hats at NoShame Theatre, I don't think "eccentric" is a push. Particularly after the Nader voter who brandished a gun in my direction.

On one of my last nights in town I bumped into Chris Walters, last seen at the Republican vice-presidential debate watching party a few weeks back.

We were at the urinals in Fork in the Alley and Chris thought this would be an ideal time to impugn my journalism.

He said I misquoted him as saying: "I didn't dislike John McCain. But he is an independent thinker and I'm a conservative." I checked. I didn't. He then told me I had come "with an agenda". I reminded him that I was one of the few people who had suggested that "Palin had edged it". Chris said if that was true he would apologise. I'm still waiting. I guess being a Republican means never having to say you're sorry.

But he was right on one thing. I did come with an agenda. To find out how this election was playing out in Roanoke, on issues both big and small.

There were some stories I wish I'd had the time to pursue. I wanted to do one on gay life in the town, which seems to be a hub for gay folk from many miles around. I also wanted to write about the large number of mixed-race couples I seemed to spot everywhere. A few had spoken to me about issues with their extended families (some of them political) that I thought were intriguing.

Most criminally I did not cover the war. I did make some calls, which lead to nothing. But since it kept not coming up I decided not to force it. Then at the Obama rally his biggest cheer was when he promised to stop the war. And I thought - it's in there somewhere, I wish I'd spent more time on it.

I sent two emails to the local Republican functionary, Mr Reedy, telling him "I'm very keen to cover some Republican activities in the area and was wondering if you could point me in the right direction.

"We spent a morning, with a cameraman, at the Democratic party offices yesterday morning, spoke to some of their volunteers and went out canvassing with them. I was wondering if there was anything similar we could do with the Republican volunteers.

"We are committed, whenever possible, to present local politics in its entirety in a fair and balanced manner."

I thought the fair and balanced thing might reel him in. No dice.

I went by the office but he told me not to come in as no one would be able to speak to me without prior approval from on high.

I blame this on the organisation. Most Republicans I did actually meet outside the campaign and away from the urinals were quite pleasant.

Sarah Palin is coming to the next-door town of Salem on Monday. I wish I could be here to see it

So with all those omissions what did I find out? That the Obama campaign seems better organized, better funded and in better spirits. That both parties have problems with their bases - Republicans with evangelicals and Democrats with African Americans.

I came because I thought it would be interesting. It was. But I didn't count on it actually being fun. So thank you, Roanoke. And goodbye.