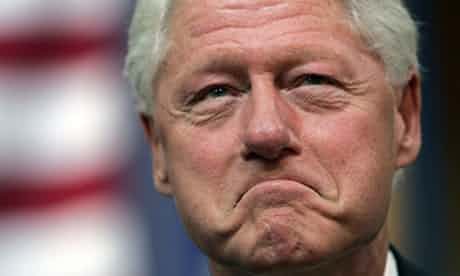 The curse of Roanoke won't hold Bill Clinton back
The Guardian,
Photograph: AP

Bill Clinton's coming to town on Sunday. Or at least that's the plan. As I mentioned after Joe Biden's cancellation last weekend, Roanoke seems to be cursed when it comes to high-profile political visitors. Biden's mother-in-law passed away last Sunday. During the primaries both Hillary Clinton and Barack Obama were prevented from coming here by a freak storm.

But Bill Clinton, as we know, is a man of his word so there is no reason to think he would bail out unnecessarily. And if, God forbid, he doesn't show up, well we can always meet the man who initiated impeachment proceedings against him, Bob Barr. Barr, the Libertarian candidate, will be at the Corned Beef and Company for a meet and greet on Monday. Let's pray for clear skies and healthy families.

Still no sign of any Republicans, which might explain why two of the three last polls in this state, which Democrats have not won since 1964, give Obama a double-digit lead.