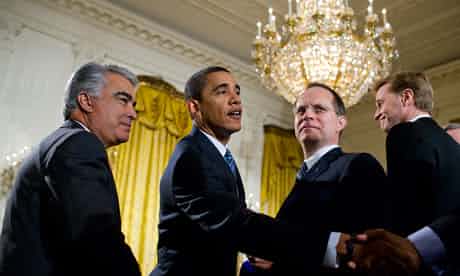 Following the stock market crash of 1987 the US House subcommittee on telecommunications and finance needed an expert to explain the underlying impulses that had brought capitalism to the brink. So they asked a criminal. Dennis Levine, once a prominent player in mergers and acquisitions, was coaxed out of prison in New Jersey, where he was serving two years for insider trading, in return for a Big Mac, fries and a chocolate shake.

After explaining how the market was rigged, he was asked what the government should do about it. "You need to send out a slew of indictments, all at once, and at 3pm on a sunny day, have federal marshals perp walk 300 Wall Street executives out of their offices in handcuffs and out on the street with lots of cameras rolling," he said. "Everyone else would say: 'If that happened to me, my mother would be so ashamed.' "

But when the most recent global economic crisis struck Uncle Sam took a different route. Rather than punish those who'd brought the system to its knees they rewarded them with billions of dollars in bailout money. For George W Bush this was consistent both with his philosophy and the interests of his base. But Barack Obama stood as a "transformative candidate" and this was a pivotal moment. Popular anger at the finance industry was strong and the banks were weak.

Just a couple of months into his presidency he called a meeting of banking executives. But instead of representing the interests of those who voted for him and had been hardest hit by the crisis – the poor, union members, black people and Latinos – he sided with those who funded him and precipitated the crisis: "I'm not out there to go after you," he told them. "I'm protecting you."

As one of the bankers told Ron Suskind in The Confidence Men: "The sense of everyone after the meeting was relief. The president had us at a moment of real vulnerability. At that point, he could have ordered us to do just about anything and we would have rolled over. But he didn't – he mostly wanted to help us out, to quell the mob. And the guy we figured we had to thank for that was [Treasury secretary] Tim [Geithner]. He was our man in Washington." This is what makes Democratic attacks on the business record of Republican presumptive nominee Mitt Romney so difficult to swallow. While their substance is sound and their target deserving, the source makes them hypocritical and opportunistic. The poor do not have "a man in Washington". Romney deserves to be taken to task. However, it's not a task the Democrats can credibly undertake since they have been complicit in the very practices for which they criticise him.

Romney was a venture capitalist for the private equity firm Bain Capital, where he was responsible for a lot of people losing their jobs. Whether more were fired than hired because of him is an open question. It's also claimed he facilitated some jobs going overseas.

In a slew of ads the Obama campaign has branded him the "outsourcer-in-chief" and run testimony from workers who suffered at Bain's hands. In one, Jack Cobb, a steelworker at Kansas City Steel, which was bought by Bain only to go bankrupt eight years later, says: "It was like a vampire," he said. "They came in and sacked the life out of us."

Republicans' predictable outrage holds little credibility, not least because the criticisms originated in their ranks. During the primaries Newt Gingrich branded Romney a "vulture capitalist", while Rick Perry's campaign created a ring tone in Romney's voice saying: "I like being able to fire people." Moreover, Romney is standing on his credentials as a businessman, claiming his experience will help him revive the nation's economic fortunes. That not only invites a critique of his record but demands it.

The Republicans are really upset because the ads are working. Polls show that in swing states, where people are more likely to have seen the ads, they are twice as likely to see Romney's time at Bain as a reason to vote against him – elsewhere the nation is evenly split.

At a time when corporate profits are soaring, unemployment is stuck at around 8% and poverty is rising, it's not difficult to see why the message would resonate.

In his "victory" speech on Super Tuesday Romney described the jobless rate as an "inconvenient statistic" for the White House. "But those numbers are more than data on a spreadsheet; they are worried families and anxious faces," he said. "And tonight, I'd like to say to each of them: You are not forgotten." But it was precisely by treating people as data on a spreadsheet that Bain made its money. Romney never forgot about those worried families because they never figured in his calculations in the first place.

The process of buying, slicing, bankrupting, restructuring and selling he practised at Bain is known as "creative destruction": that means creating profits for the shareholders and destroying people's livelihoods if necessary. That's what capitalism is; that's what capitalism does. It's essentially amoral. Its goal is not to create jobs, let alone keep them in a certain country, but to make profit.

The issue here is not that Democrats offer no alternative to capitalism. Somebody should but they've never claimed to. But they offer no challenge to it in its most rapacious, exploitative and ultimately self-defeating incarnation of recent times. It is difficult to accept lectures on outsourcing from the party that introduced the North American Free Trade Agreement – an outsourcers' charter liberalising trade between the US, Mexico and Canada. The party that repealed the Glass-Steagall Act, loosening regulations that would have mitigated the worst effects of the most recent crisis, has no credibility to preach about business ethics.

The Democrats have done a great deal to make things easier for firms like Bain to do the very things they are criticising and precious little to protect the livelihood of people like Cobb and his former colleagues in the steel mill.

Given the opportunity to reform a banking system where venality, corruption and ineptitude were rife Obama decided instead to prop it up. As such he has proved himself more keen to save capitalism from itself than protect workers from its excesses.

He told the bankers at the 2009 meeting: "My administration is the only thing between you and the pitchforks." Next time he should get out of the way.