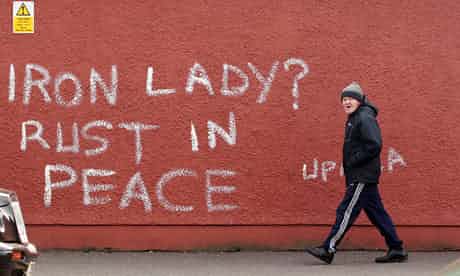 The Iron Lady is dead but Thatcherism lives on
The Guardian,
Photograph: Cathal McNaughton/Reuters

In 1966, a little more than a year after Martin Luther King won the Nobel peace prize, only 33% of Americans had a favourable view of him, as opposed to 63% who viewed him unfavourably. It's not difficult to see why. He was a civil rights leader in a country where 85% of whites thought blacks were "moving too fast for racial equality". He had also become a vocal opponent of the Vietnam war. Just six days after King's death in April 1968, the Virginia congressman William Tuck blamed King for his own murder, telling the House of Representatives that King "fomented discord and strife between the races ... He who sows the seed of sin shall reap and harvest a whirlwind of evil."

But in the intervening 45 years, the mud slung at him has been cleaned off and his legacy buffed to resemble that of a national treasure. In 1986 his birthday became an annual national federal holiday. By 1999, a Gallup poll revealed that King tied with John F Kennedy and Albert Einstein as one of the most admired public figures of the 20th century in the US. More popular than Franklin Delano Roosevelt, Pope John Paul II and Winston Churchill. Only Mother Teresa was more cherished. In 2011, King's memorial was opened on the National Mall in DC, with a 30ft statue sitting on four acres of prime, historical real estate.

"We can view the past and achieve our understanding of the past only through the eyes of the present," argued the historian EH Carr in What Is History?, his landmark essay. "The historian is of his own age, and is bound to it by the conditions of human existence."

America came to appreciate King only once it had reached a consensus that legal segregation was wrong, that the Vietnam war was a mistake and that the other things he said about wealth redistribution, American militarism and affirmative action had conveniently been forgotten. At that point his legacy could be understood by enough people, not as the source of division – as his contributions were seen at the time – but of resolution.

The polarised, polemical and at times problematic response to Margaret Thatcher's death has highlighted that, in her case, there has been no resolution and therefore there can be no consensus. Coming at a time of rising unemployment and economic inequality, declining social mobility, entrenched poverty and welfare cuts, with a Conservative-led government pursuing swingeing austerity measures, her death serves as a proxy for debate not only about divisions of the past but of the present. The front-page headline of the Financial Times on Thursday read: "Prosperity gap widens as welfare cuts hit north hard." It could have been written at almost any time during the 1980s.

Hers is a living legacy of marketisation, privatisation, economic stratification and social dislocation. Its victims and beneficiaries are not only still alive; they are still being born. Old, unhealed wounds about pit villages and hunger strikers are being exposed as new ones about disability benefits and the bedroom tax are being inflicted. A poll shows that Thatcher's policies – such as cutting income tax and raising VAT, privatisation and cutting top tax rates for the rich – are among the least popular today, but these are the very ones the coalition government is pursuing. Appreciation of her breaks down pretty much on party lines: 90% of Conservatives said she was good or great, as opposed to just 23% of Labour voters.

This is why attempts at hagiography and canonisation are continually interrupted by outbursts of outrage, incredulity and, occasionally, even jubilation. Of the complaints the BBC has received about its coverage of her death, 35% believe it has been too favourable, 29% that it has been too critical, and 36% that it has been too much. The Telegraph has shut down website comments on stories about her because of a flood of abuse. "Ding Dong, the witch is dead" from The Wizard of Oz is in the top 10 in the midweek charts and destined for No 1 next week. When a prominent statue of her was erected in 2002, a man decapitated it with a metal pole. Appeals to national unity in mourning the death of an elder stateswoman – which are generally heeded – have not been so widely observed this time because, while Thatcher is dead, Thatcherism is not.

It is also why so many of those outbursts smack of impotent rage. Thatcherism was a gift Thatcher bequeathed to the British political class. Tony Blair entrenched her agenda, saying he felt his "job was to build on some of the things she had done rather than reverse them". David Cameron has expanded and deepened it. Clegg has willingly conceded to it.

Ideologically, the left has adequately countered the rationale for Thatcherism. But organisationally and strategically it has failed to establish the wherewithal to respond adequately to it and, electorally, it has failed to convince enough people of its alternatives.

The trouble isn't just that some people can't get over her agenda; it's that many are still going through it and have yet to find a way to get round it.

follow on twitter
RT @nytimes: A Black professor who studies housing discrimination had his house appraised: $472,000. He then did a “whitewashing experiment…
RT @MCRSociology: Gary Younge discusses identity politics and America with Will Hutton in this episode of @thewesocietypod https://t.co/72…
RT @mart_welton: Congratulations to all those getting their A-level results today. If you have BBB at A-level or above you can still apply…
RT @BernardineEvari: Please follow the groundbreaking online #MuseumofColour UK, founded by the unstoppable Samenua Sesher. The 1st gallery…
RT @EthnicityUK: Gary Younge is interviewed by @sonikkalogan about his work on racism and gun violence in @the_hindu #DataPoint podcast. h…
RT @thefreedomi: 🚨 NEW: Saudi women’s rights activist & academic Salma al-Shehab was sentenced to 34 years in prison + 34 year travel ban f…
RT @LRB: #DawnFosterForever! On Thursday 15 September at the @LRBbookshop, @BizK1, @piercepenniless, Lynsey Hanley and @garyyounge will d…
RT @ShowunmiV: This is how we support Black women and girls https://t.co/8YmgV21zHo
RT @sonikkalogan: It's #DataPoint Pod Thursday! In this week's episode, I talk to @noraneus, @garyyounge and @Casey_J_Wooten about the U.S.…
RT @bgnoiseuk: Next month, @LRBbookshop will host an event to celebrate the life and work of Dawn Foster with @BizK1, @piercepenniless, Lyn…
© Gary Younge. All Rights reserved, site built with tlc
Where to buy cheap renagel What do i need to buy cellcept Can you take bactrim and levaquin together How much nortriptyline cost How to get pravachol in the us Buy generic azulfidine Cheap asacol canada How much does xifaxan 550 cost Where to buy timberland pro renova Can you buy ceftin over the counter