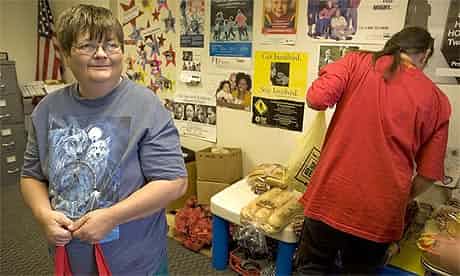 The queues for free bread are getting longer
The Guardian,
Photograph: Sean Smith

There are many ways to pick up your free bread at the Presbyterian community centre in south-east Roanoke. A few just come in, pick up a couple of loaves and go. Others take their time, chat with the staff and catch up with other regulars. And some like to linger over the selection, prodding each loaf and asking fellow visitors their opinions on the relative benefits of the fare on offer as though they were in a local patisserie.

Cherie Becker, 42, is one the latter. She says she only comes a little more than once a year. This time it's because she's moving from Richmond back down to Roanoke and has yet to find work roofing, painting and carpentry.

"I came back because my daughter's had a baby and I want to be near her," she explains.

She thinks she'll find work without a problem. But then she's not aware of the financial meltdown.

"Did a whole bunch of people lose their jobs or something," she asks.
I shrug. "I saw something on the news about there being a big problem with work and the economy."

I ask if she means the stock market crash or the unemployment figures. She shrugs. And goes back to finding the perfect loaf.

Nobody in American politics speaks for the poor. For all the thousands of lobbyists in Washington DC, a handful, if that, are there to represent the small but growing number of people in extreme economic distress.

There is a great deal of talk about the middle class - which here could mean anyone who is getting by with a job - but poverty rarely makes it on to the agenda. That is at least in part because there are no votes in it. The middle class don't want to hear about subsidising the indigent - until as is increasingly the case they find themselves indigent. And the poor are the least likely to vote.

Becker has no intention of voting. But she likes Obama. Indeed she likes black men in general. She lists the ethnicities of her previous few boyfriends. "My daughter's mixed," she says proudly, pointing to the cameraman's bag. "My last boyfriend was as black as that case."

All sorts of circumstances might lead you to the community centre but by the time you get there only one matters. You are flat broke. As the month goes on the lines get longer. The mainly white area used to be home to the largest rayon factory in the world. But those days are long gone and the steady jobs with them.

The last year they have seen a lot of new faces dropping in, as well as regulars like Sue Shelton.

"I've been coming since the eighties to get tutored in writing and reading," she says. Sue has two kids and a husband at home and both parents are disabled. "By the time we've paid everything else there is not a lot left so we come here for help."

The Southwestern Virginia food bank, which provides some of the food to places like the Presbyterian church, says it has seen a 9% increase in the demand for food assistance in the region.

"The lines we are seeing now are beginning to look like the lines they saw during the depression," says Pamela Irvine, the food bank's president. "This is America. It makes no sense to me."

More than a quarter of all those who visit the banks are working. Meanwhile those donating food was down 12% last month, and thanks to the rise in gas prices the cost of distributing it has increased by more than double.

Becker doesn't have a problem with gas - with $600 of unpaid fines she can't drive. So she walks a lot and gets lifts when she can. Shelton heads off but says with some certainty that she will be back next week. Becker leaves with a small sports bag full of food and asks if we will give her a lift up the road. A few blocks away there is another church and another line of maybe a dozen people. She gets out and joins it. And is greeted by people in the queue.