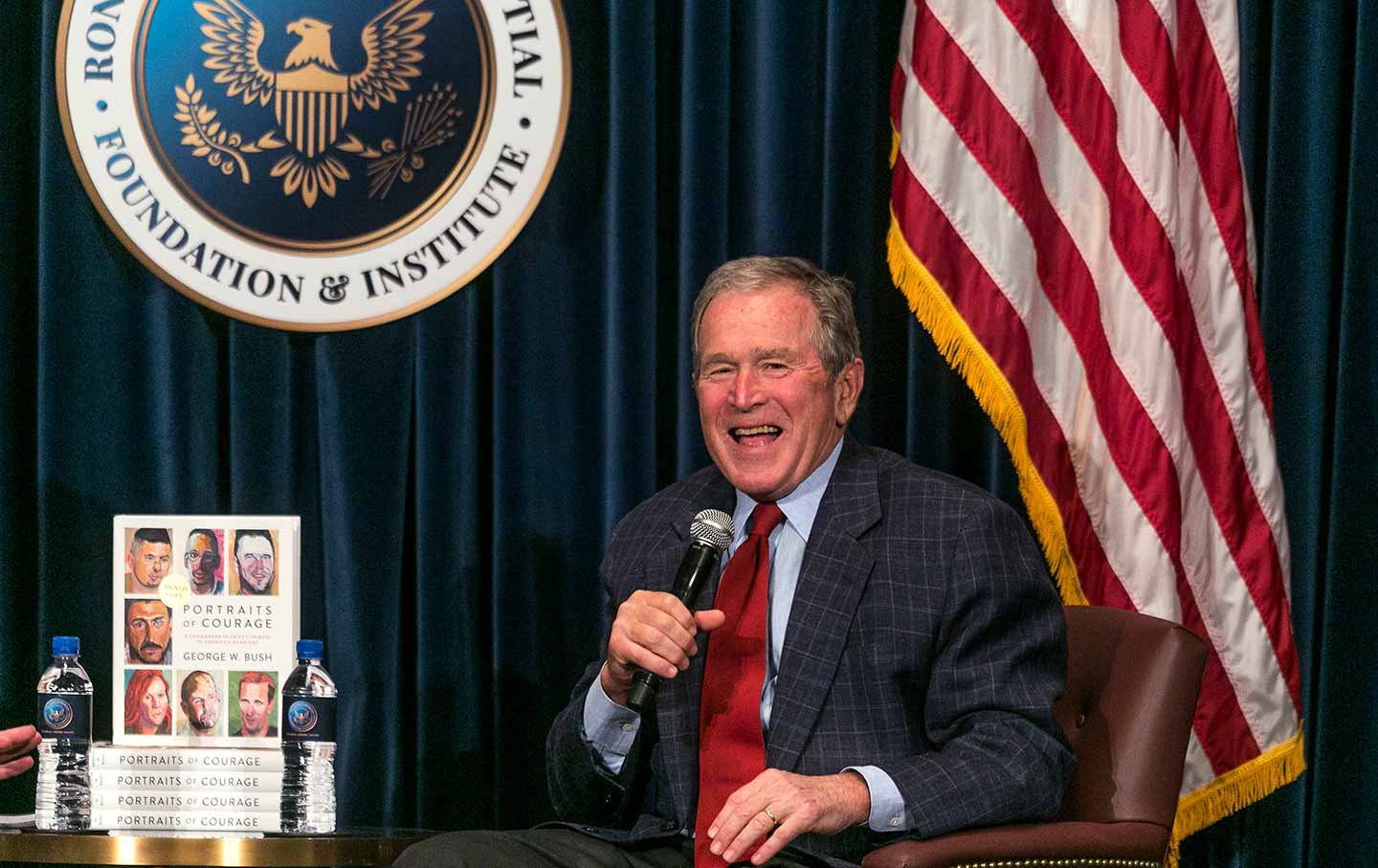 It says something about the state of affairs we’re in when George W. Bush emerges from the dung heap of history ostensibly smelling like roses. Were Bush from a less powerful country—one that has to follow rules it had no part in making, rather than one that sets rules it has no problem violating—he would be at The Hague before a war-crimes tribunal.

Instead, he is promoting his artwork—paintings of US veterans wounded in the line of duty—in a new book called

. Given that the illegal war he launched left so many dead or gravely injured, it might more properly be titled

Were it simply a matter of the artwork Bush was promoting, the hypocrisy might have overwhelmed the entire enterprise. Yet while many Americans thought the country had reached rock bottom under his presidency, it turns out to have been a false floor. There is worse, it seems, than Bush. And so it was that the man America had conveniently forgotten, like an embarrassing uncle shut away in the basement, was brought upstairs and given a seat at the grown-ups’ table.

Bush’s moment of redemption came when he was asked how he felt about Donald Trump’s attacks on the media. “I consider the media to be indispensable to democracy,” he replied. “That we need an independent media to hold people like me to account. I mean, power can be very addictive, and it can be corrosive, and it’s important for the media to call to account people who abuse their power, whether it be here or elsewhere.”

Bush’s comments, and the rush by some liberals to embrace him, illustrate two key trends. The first is the degree to which, in the desperation to mount the broadest possible coalition against Trump, some are prepared to neglect the principles guiding that opposition and, given their form, may yet prove to be unreliable allies.

Bush was never held to account for his own abuses of power. The mainstream media may have found their voice against Trump, but they were virtually mute or, even worse, implicated in peddling lies for the run-up to the Iraq War. This was fake news of some consequence: Hundreds of thousands died, a country was devastated, a region destabilized, innocents tortured, a generation of terrorists spawned. Meanwhile,

held a story about Bush’s warrantless eavesdropping until after the 2004 election, in part because the editors thought it would be unfair to run it too close to the vote.

Similarly, Trump’s Muslim ban, which has enraged so many at home and abroad, has its precursor in Bush’s own policies. Following September 11, his administration implemented the National Security Entry-Exit Registration System, in which people from countries deemed “higher risk” were required to undergo interrogations and fingerprinting upon entering the United States. Noncitizen males over the age of 16 already in the country on student, work, or travel visas from countries with active militant threats were also required to register in person at government offices and periodically check in.