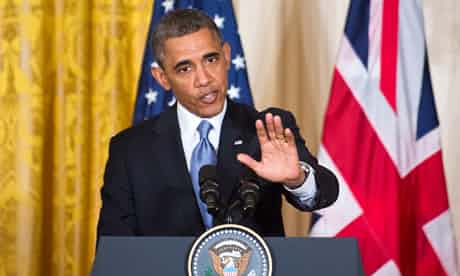 The Republican wolves are out for Obama but they are yet to draw blood
The Guardian,
Photograph: J. Scott Applewhite/AP

The thing people often forget about the story of the boy who cried wolf was that, at the end of the day, there was a wolf. For the past six years – since Barack Obama announced his presidential intentions – Republicans have been crying themselves hoarse. Obama, if they were to be believed, was a Kenyan-born communist Muslim with a forged birth certificate who stole the election by registering millions of ineligible voters.

"A lot of information about Obama's background is missing," said Abigail Billings, at a meeting of a 9-12 group (organised by the conservative former Fox host Glenn Beck) at a non-alcoholic bar in Lexington, Kentucky, in 2009. "The media in America is not doing any research. They're not asking any questions. They're not reporting any longer. They're now opinionated talk shows. They're no longer offering factual news coverage." Billings, like the 16 others gathered that evening, watched Fox News. A quick poll revealed that seven thought Obama was a Muslim, 10 believed he was a communist, and none thought he was born in the US. Such claims were so patently ridiculous and so easily disproven that few beyond the right, substantial in size but insulated in range, paid them much attention.

But over the past fortnight wolves have been out in force. The Obama administration is beset by scandals, of varying magnitudes, that would give conspiracists good reason to be paranoid. First came evidence that the state department deliberately downplayed the involvement of al-Qaida in the attacks on the US embassy in Benghazi, Libya, that left four dead, including the ambassador. Then came the revelation that the tax collection agency, the Independent Revenue Service, subjected Tea Party and other Conservative groups (including 9-12) to special scrutiny over their tax-exempt status. Finally, it transpired that the justice department, looking for a leaker on an issue of "national security", obtained two months of telephone records of journalists at the Associated Press.

Conservatives can't believe their luck. They wait six years for an actual wolf and then three show up all at once. Amid gratuitous speculation they are comparing Obama to Nixon and calling for his impeachment. "What we don't know, at this point," says Mitch McConnell, the Republican minority Senate leader, "is whether it jumped the fence from the IRS to the White House." "My question," said Republican house leader John Boehner of the IRS story, "is who's going to jail?"

Some liberals are playing down the brouhaha. After six months of hyperventilating about Benghazi, all the Republicans have really uncovered is a turf war between the state department and the CIA. There is no evidence that what happened at the IRS was politically motivated, and everything to suggest the agency is incompetent and understaffed. (Nobody is playing down the justice department story.) There is no indication that Obama had anything to do with any of them – beyond appointing the people who hired the people involved. His approval ratings have not dipped and, according to Gallup, people are paying far less attention to these stories than they do to news stories generally.

There is something to these arguments. Yet they miss the bigger point and, in so doing, downplay the potential damage. There was nothing to Whitewater (the probe into the Clintons' failed real estate investment) either. But that didn't prevent the appointment of a special prosecutor into the affair, who would eventually find Monica Lewinsky.

The public's lack of interest also means little. Nixon was re-elected with a whopping majority while Watergate was unravelling on the inside pages. Once these balls start rolling there is no saying where they will end up. Moreover, if Bush were in the White House, targeting antiwar groups, journalists and leakers, the very people making these rationalisations would never accept them.

The problems for Obama are twofold. First, each scandal, in its own way, has meaning beyond itself. Accusations about him being a communist, Kenyan-born Muslim did not resonate beyond those who wished to believe them in the first place because they didn't fit with anything most people knew, saw or heard of Obama. There was no market for their plausibility. These are different. Almost every substantial political discussion since his first election – be it about healthcare, the economy, taxation, guns, immigration or drone strikes and kill lists – has, at its root, been a debate about either the size, competency, secrecy, efficiency or intrusiveness of government. Together, these incidents illustrate precisely those issues, creating a framework of credibility for broad assaults on the legitimacy of government. Public trust in government is already at historic lows. This won't do it any good.

Second, while comparisons to Nixon are wide of the mark, things are beginning to look wearily familiar. It is about this time in a second term that administrations display the malaise of having been in office long enough for that mixture of paperwork, arse-covering bureaucracy and hubris to come to light. Obama was only re-elected six months ago, but this is the first sign of lame duck disease. From now until 2016 will be hearings, inquiries, firings, depositions and subpoenas aplenty. Obama insists there is plenty he still wants to do, but he'll spend a large amount of his time dealing with this.

Already a third of the Republican-controlled house are investigating the White House. At least one influential conservative lobbying firm, Heritage Action, has told the Republicans they should prioritise these scandals over any legislation that might divide them. "As the public's trust in their government continues to erode," wrote its head, "it is incumbent upon those of us who support a smaller, less intrusive government to lead."

At a New York fundraiser last week Obama said of the Republicans: "My thinking was that after we beat them in 2012, well, that might break the fever." Instead they fed it, leaving the right in a state of delirium. Herein lies Obama's greatest gift – overzealous detractors with a tin ear for the public mood. In the hearings that have taken place so far Republicans have overplayed their hand: skipping from presumption to assumption to accusation unencumbered by facts, logic or proportion. Each time the potential for building public and political support on the matter concerned arises, they squander it for partisan gain. The only luck Obama seems to have had in recent weeks is in his opponents.