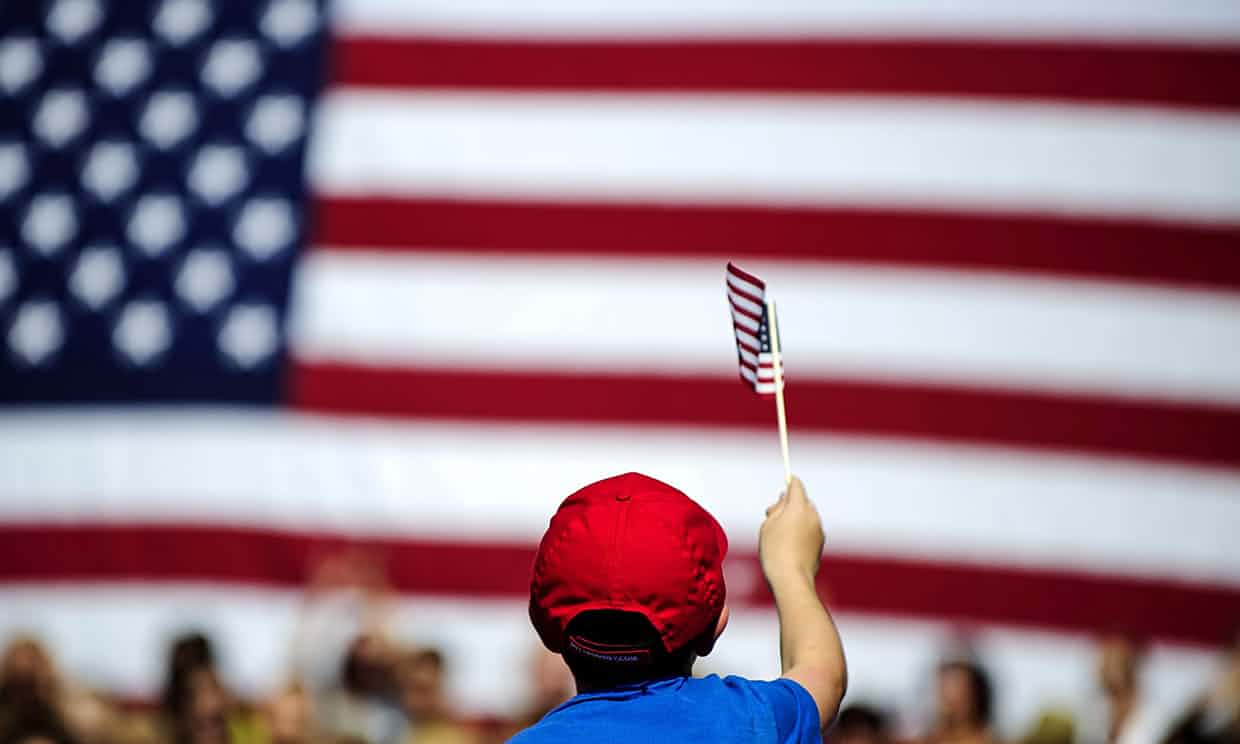 The Republicans: over-reaching and underscoring
The Guardian,
Photograph: KeystoneUSA-Zuma/Rex

In 2006, Kansas Republican Sam Brownback was crowned “God’s Senator” by Rolling Stone magazine. As he struggles for re-election as governor in this reliably conservative state, he is now praying for divine intervention. In 2010 he won the governorship by a 30-point margin. This year he is in a dead heat with his Democratic challenger, who has the support of more than 100 Republicans, most of them former or current state-wide office holders.

Brownback’s problems aren’t difficult to fathom. Caffeinated by the Tea Party movement and funded by the billionaire Koch brothers, he came into office with a plan to slash taxes and spending while simultaneously creating jobs, stimulating economic growth and bridging the deficit. He said it would be “like a shot of adrenaline in the heart of the Kansas economy”. Instead, Kansas flatlined. Since he took over the state has gone deeper into debt, the poverty rate has risen 3%, the economy is growing at half the rate of the four neighbouring states, and its credit rating has been downgraded.

Meanwhile, Kansas’s Republican senator Pat Roberts, who won by a 24-point margin in 2008, is also struggling against an independent businessman. The establishment, mistakenly, took his re-election to a fourth term for granted. “[Roberts] is basically furniture in the Senate,” one Republican strategist told the Washington Post. “You could give the average Kansan 24 hours to come up with something Pat Roberts has done [and] even the crickets would be standing there befuddled.”

Kansas is not typical. Indeed the problem with these midterm elections, which take place on Tuesday, is that there is no such thing as “typical”. This is not what they call a wave election, when one party surfs in on a tide of popular discontent and the promise of radical reform. There are few grand narratives. The economy is recovering but still weak. Obamacare is unpopular but nobody wants to repeal it. The nation has embarked on a war which most support but few think is succeeding or has clear goals. Obama has low favourability ratings, but voters are even less impressed by the opposition. Neither side is really promising anything beyond hanging on to or gaining office.

Since Republicans are likely to take over the Senate, giving them both houses of Congress, they are equally likely to claim victory. But if there are broader lessons from this cycle then these celebrations will be short-lived. Economically, politically and demographically, the long-term prospects for Republicans are far from rosy for two reasons.

First, one thing that Kansas does illustrate is that the reformation and reassertion of the American right has passed its peak of influence. Organisationally, the Republican establishment has become more adept at defeating hard-right candidates, who would prove a liability, at the primary stage (had they managed this earlier they would control the Senate already). But politically it is now the electorate that is rejecting the Republican agenda. “We’ve got a series of blue states raising taxes and a series of red states cutting taxes,” Brownback said last year, referring to his policies as an experiment. “Now let’s watch and see what happens.” We all watched, and it wasn’t pretty.

In Wisconsin, Republican governor Scott Walker, who was lionised for union-busting policies and seeing off a recall vote, ran on a similar if less extreme agenda to Brownback, and failed in a similar if less dramatic way. He too is in a tough re-election battle. Similar stories of Republican overreach are playing out in otherwise moderate states such as Maine, Michigan and North Carolina. The experiments failed. The reality could not deliver on the rhetoric. Some of these candidates, including Brownback and Walker, may still win. But all have been both chastened and exposed.

While this will make the Republican party less unruly, it also demotivates the most dedicated part of its base. Support for the Tea Party has declined precipitously but its supporters are still far more motivated to vote than other sections of the electorate, including other Republicans. And while their agenda may have been extreme, they at least had an agenda, which cannot be said for the Republican party as a whole.

The second reason Republicans should temper their joy is because the Senate races reveal their national vulnerabilities. Of the 10 states considered toss-ups this year, Mitt Romney won seven and Obama won three in 2012. Obama won those races by 6% or less; Romney won all but two of his by more than double digits. Put bluntly, it shouldn’t even be close. But while Democrats are struggling in swing states that are supposed to be tough, like Iowa, Colorado, New Hampshire and North Carolina, Republicans are in trouble in Georgia, which has not voted Democratic in a presidential election since 1992. Meanwhile it has given up on states where they need to be competitive if they are to win back the White House, like Michigan, Minnesota and Virginia.

This is partly about local factors. But it also represents broader social and demographic trends that are increasingly stretching the party, given its present platform – particularly, but not exclusively, among minorities and women.

Take Georgia. The party’s core here, as elsewhere, is white men, married white women, evangelical Christians, the elderly and rural voters – only more so because it is in the south. All these categories but one are in decline. In the past decade the proportion of white registered voters in Georgia has declined from 72% to 59%; the Hispanic population here increased by 96% between 2000 and 2010 and Hispanic voter registration in that time increased by 400%; since 1990 the state’s rural population has fallen from 31% to 25%.

True, the population is ageing, but it is also dying out. Three-quarters of active registered voters over the age of 65 in Georgia are white, which is true for just under a third of those under 30. In short, thanks in no small part to their policies on everything from immigration reform to gay marriage, with each election cycle the Republican party needs to get more votes from fewer voters.

None of this makes a Democratic victory here inevitable. Far from it. Texas and Arizona have changed at a faster pace and remain reliably Republican for now. Hispanics, for example, may be growing fast in Georgia, but they still comprise just 4% of the electorate. And if nobody wins 50%, the Senate race here will go to a run-off that Democrats are likely to lose.

What it does indicate is that with a good candidate and a sophisticated get-out-the-vote operation, Democrats are becoming more viable in places where they previously didn’t have a prayer, while Republicans are becoming less viable in places where they were once competitive or even dominant. Not only have they failed to deliver to their base, their base is also shrinking. Come Tuesday they may be uncorking the champagne; but, all else being equal, in years to come they will be crying into their beer.

follow on twitter
RT @MCRSociology: Gary Younge discusses identity politics and America with Will Hutton in this episode of @thewesocietypod https://t.co/72…
RT @mart_welton: Congratulations to all those getting their A-level results today. If you have BBB at A-level or above you can still apply…
RT @BernardineEvari: Please follow the groundbreaking online #MuseumofColour UK, founded by the unstoppable Samenua Sesher. The 1st gallery…
RT @EthnicityUK: Gary Younge is interviewed by @sonikkalogan about his work on racism and gun violence in @the_hindu #DataPoint podcast. h…
RT @thefreedomi: 🚨 NEW: Saudi women’s rights activist & academic Salma al-Shehab was sentenced to 34 years in prison + 34 year travel ban f…
RT @LRB: #DawnFosterForever! On Thursday 15 September at the @LRBbookshop, @BizK1, @piercepenniless, Lynsey Hanley and @garyyounge will d…
RT @ShowunmiV: This is how we support Black women and girls https://t.co/8YmgV21zHo
RT @sonikkalogan: It's #DataPoint Pod Thursday! In this week's episode, I talk to @noraneus, @garyyounge and @Casey_J_Wooten about the U.S.…
RT @bgnoiseuk: Next month, @LRBbookshop will host an event to celebrate the life and work of Dawn Foster with @BizK1, @piercepenniless, Lyn…
Help me Twitter. The quote: ""You can cut all the flowers but you cannot keep Spring from coming." is most commonly… https://t.co/Xs7JkiOEd5
© Gary Younge. All Rights reserved, site built with tlc
Bactroban ointment price ph Lioresal online in india How to get propecia without a doctor What i should buy with combivir How to get pravachol in the us Can you take bactrim and levaquin together Can you take spiriva and trelegy together Where can you get cipro Celexa generalized anxiety disorder Get bactroban prescription