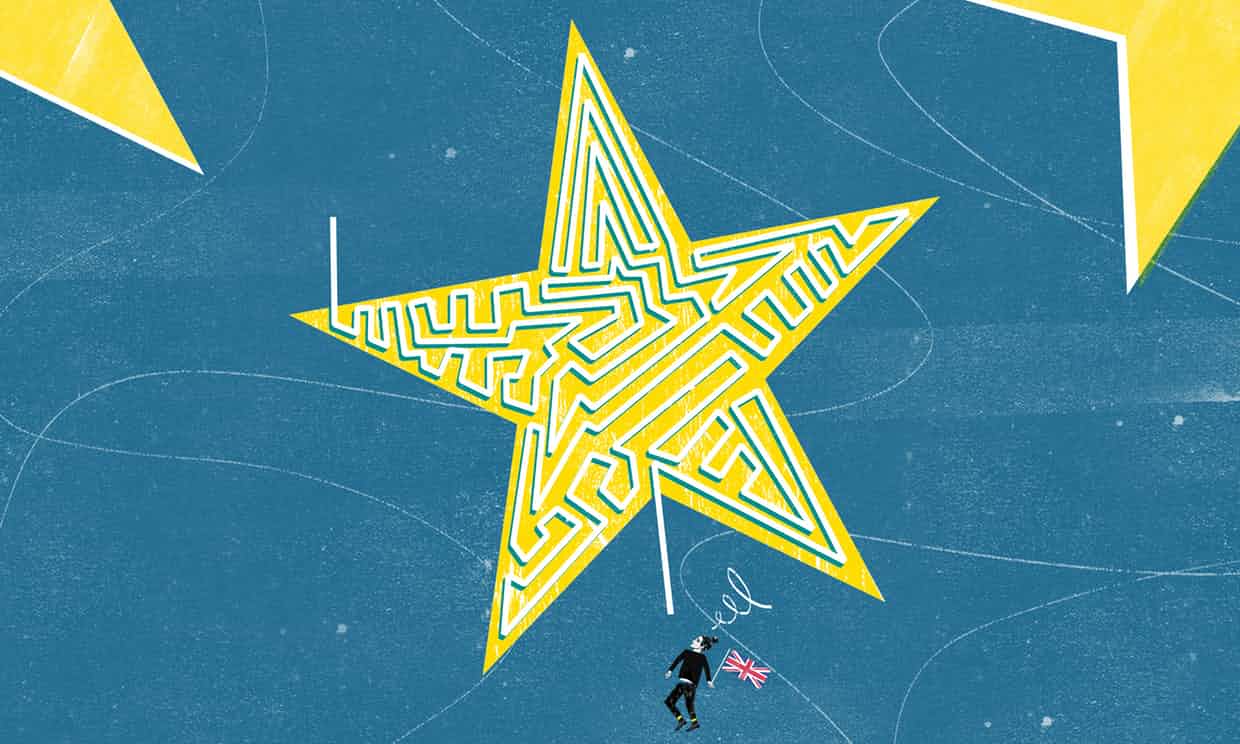 The shambles of Brexit diverts attention from the EU’s democratic deficit
The Guardian,
Illustration: Nate Kitch

I considered voting for Brexit. After the referendum was agreed, but before the campaigning had begun, I could have gone either way. My issue was democracy. I didn’t like the fact that the European parliament could not initiate legislation; that turnout for European parliamentary elections had fallen 30% since the first elections in 1979; the way countries that voted “the wrong way” on EU referendums were effectively instructed to vote again (Denmark 1992; Ireland 2001, 2008) and get it right; the fact that Greece’s resounding democratic rejection of the terms of its bailout (2015) was treated with such contempt.

It felt increasingly obvious that this institution had growing control over our lives even as it became less obvious how anyone beyond its ruling bodies could directly influence it. It’s never been obvious to me that the EU’s senior leadership could satisfactorily answer all of the late Tony Benn’s five essential questions for people of power, namely: What power have you got? Where did you get it from? In whose interests do you use it? To whom are you accountable? How do we get rid of you?

To frame this as a matter of sovereignty felt too limiting. International capital would have the run of the planet whether we stayed in or out of the EU. So our leaving would not give us “back control” but leave us more isolated than independent. The question was less who had the power than whether that power was democratically accountable.

Once the leave campaign was gripped by xenophobia and post-colonial delusion my voting choice became clear. Basic social democratic protections and open borders were the things I liked most about being in the EU. I’ve heard many remainers insist that people who voted to leave weren’t voting against the EU, but other things. Well so was I – I was voting primarily against bigotry. I feared a leave vote would strengthen an ugly, stubborn strain of small-minded British parochialism that needed no encouragement. That fear has proved well founded.

So my vote to remain was not an endorsement of the EU. I wish we hadn’t left; I wish it were much better. There is no contradiction there. Indeed, I think if it had been better we would not have left and we should have only stayed with the proviso that we would work to make it better.

Two years on, this distinction still matters because the Keystone Cops nature of Britain’s departure has diverted attention from a chronic and ever-urgent issue – the EU still needs to be democratised. The lack of accountability and transparency in its institutions leaves it susceptible to a vast array of haters and hucksters, from the far right to eccentric iconoclasts. This became clear again last weekend in Italy, where Eurosceptic parties – who floated the possibility of a referendum on ditching the euro – fared best. Across the continent the institutions associated with the EU are more tolerated than loved, leaving the EU ruling more by ambivalence than consent. In short, it is only because Theresa May has made herself look so ridiculous that Jean-Claude Juncker is looking so good. 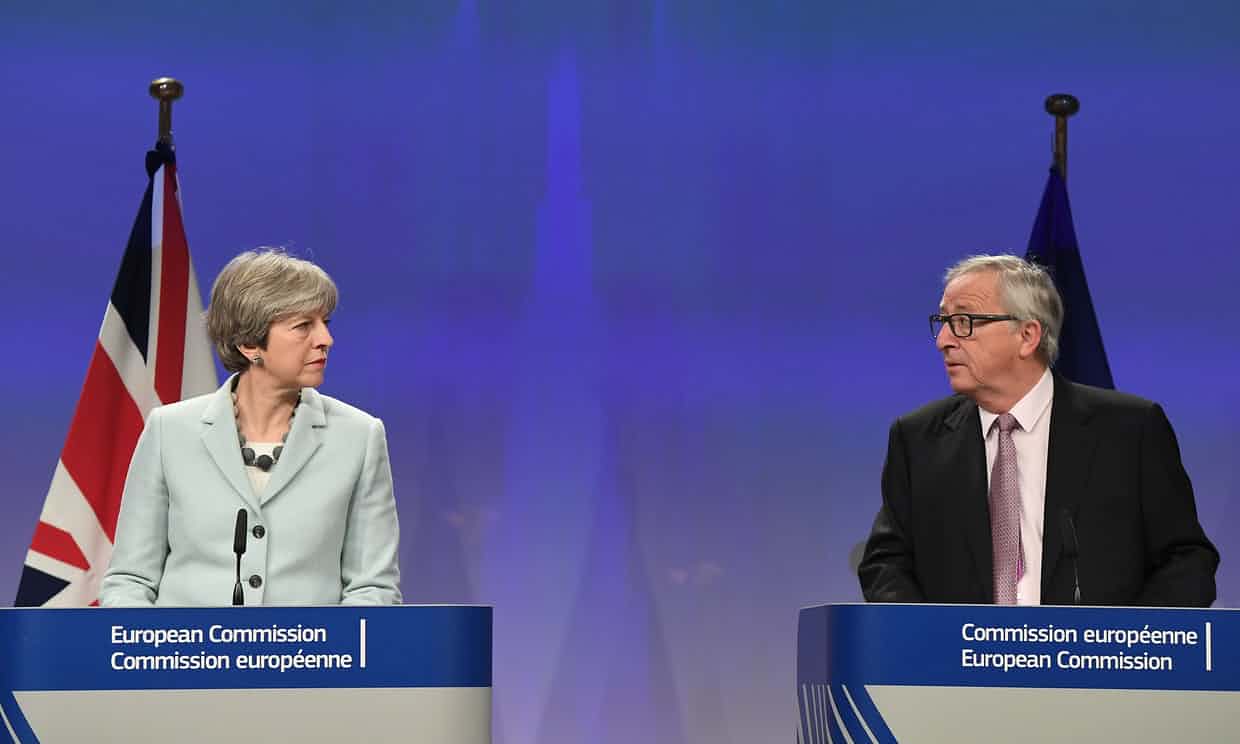 ‘It is only because Theresa May has made herself look so r that Jean-Claude Juncker is looking so good.’ Photograph: Emmanuel Dunand/AFP/Getty Images

There was a keener sense of this vulnerability early last year when the brazen idiocy of Britain’s negotiating strategy was not fully clear. Back then, the possibility of far-right victories in the Netherlands and France prompted fear of Brexit contagion. The far right did not win. And in the intervening time Britain has kept throwing down the gauntlet, only to pick it up itself, apologise for making a mess, and ask for another chance.

This has forced the EU to negotiate with Britain like a parent negotiates with a petulant child – cajoling, threatening and sometimes just waiting patiently until they come to their senses. They have made clear the boundaries, as they did this week, only stepping in to prevent self harm.(Even before Brexit, Angela Merkel called Britain Europe’s “problem child”.) With an enemy like that, the EU hasn’t really needed friends. So long as Britain acted as a tragicomic, cautionary tale, the EU’s legitimacy has appeared unassailable and longevity beyond doubt. Neither is true.

First of all, while the far right did not win in France or the Netherlands it did gain ground, as it went on to do in Germany and Austria later in the year. Its parties don’t have to win to exert considerable influence. The UK referendum, lest we forget, was promised by the Conservatives to neutralise the electoral threat of Ukip. That party is now a rounding error and a laughing stock; Britain, meanwhile, is heading out of the EU.

‘It is only because Theresa May has made herself look so r that Jean-Claude Juncker is looking so good.’ Photograph: Emmanuel Dunand/AFP/Getty Images

A Pew Research poll from last year shows there is widespread desire on the continent for referendums on EU membership – with significant majorities in France, Italy and Spain (the eurozone’s second, third and fourth biggest economies respectively). And even if there is little backing for actually leaving at present, it is not difficult to see where more support might come from.

Only roughly a third of Europeans have a favourable view of the European Central Bank, European commission and European parliament, according to a 2014 Pew survey, while barely half like the EU as a whole. True, 70% believe the EU promotes peace; but 71% believe their voice doesn’t count in Brussels, 65% believe the EU doesn’t understand the needs of its citizens – and 63% think it is intrusive.

Indeed, while Britain has always been something of an outlier in the EU, its scepticism and sense of alienation are not unique. In a Eurobarometer poll, taken a month before the Brexit referendum, majorities in 16 EU countries, including France, Spain and Italy, felt “their voice did not count in the EU”. In 10 nations more, voters felt their voice counted less than in Britain.

There is no suggestion that the EU is vulnerable to another member state leaving in the foreseeable future. Indeed, Eurobarometer polls show that European citizens consistently have more trust in the EU than in their own governments. The trouble is the foreseeable future, at present, is not that far. A few years ago, Donald Trump’s presidency or Britain’s current position would have been unthinkable. And, paradoxically, one of the reasons the EU can perform so functionally is precisely because, while it does have to cater to elected governments, it does not have to respond to the popular will: its leaders don’t go before the electorate.

Shortly before David Cameron announced there would be a referendum, Angela Merkel suggested he “couch the speech in an argument about Europe having to change” for the benefit of everyone. She was right. The fact that he failed to heed her advice is not just bad for Britain. It’s bad for Europe too.