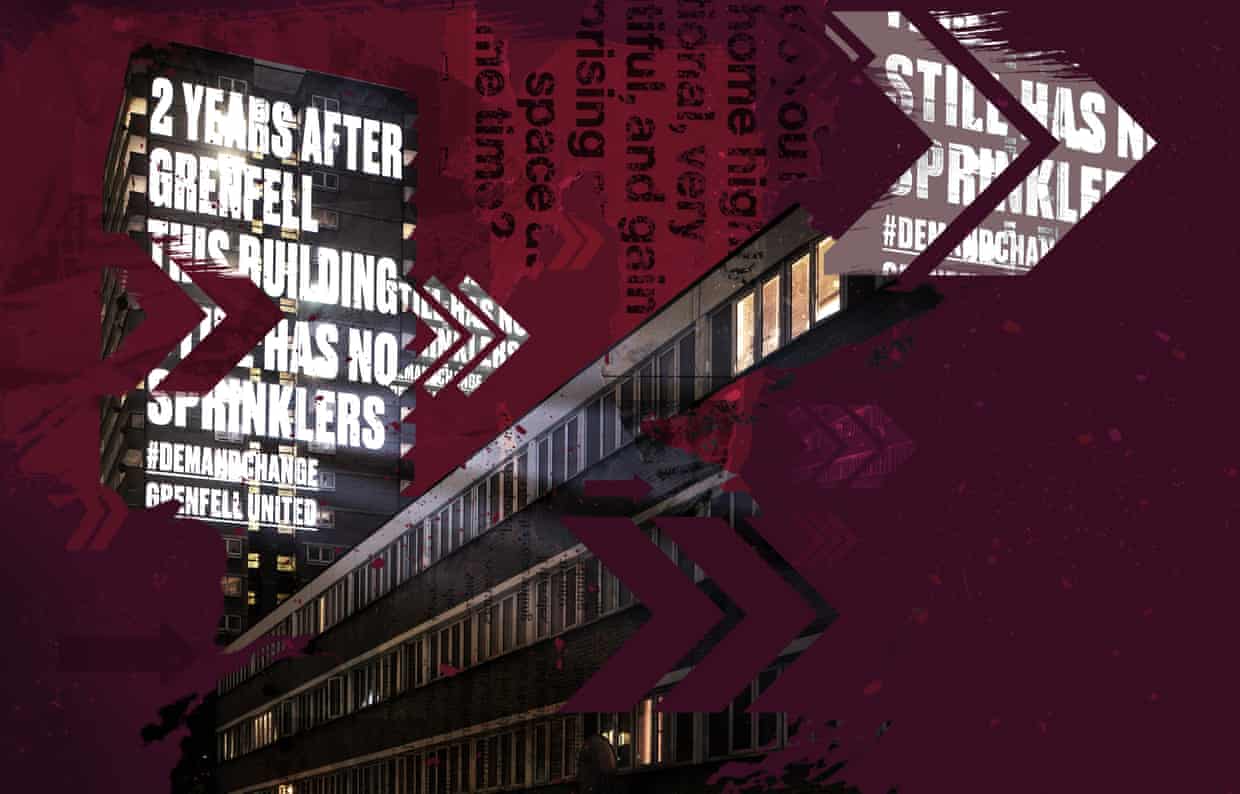 The shameful truth about Britain’s response to Grenfell
The Guardian,
Illustration by Eleanor Shakespeare

Last month Peter Mason, the chair of the Barking Reach residents’ association, contacted the builder Bellway Homes, requesting an investigation into the fire risk at his block of flats, following a BBC Watchdog report that revealed fire safety problems at two other Bellway developments. The company reassured him there was nothing to worry about. The wooden cladding had been treated so that it would take 30 minutes before a fire could take hold. “We understand that these news articles are highly alarming for all residents of new homes,” the company responded. “And I hope that the above statement has allayed any fears you may have over the safety and construction of your Bellway home.”

On Sunday the cladding at De Pass Gardens, part of the Barking Reach development, caught fire in 70 seconds and soon consumed the building. Andrew Boff, the chair of the planning committee on the London Assembly, who lives opposite and was on the scene to help rescue people, told the London Evening Standard there was “no alarm and of course no sprinklers”. Miraculously, nobody died.

The very next day, at an event in parliament to commemorate the second anniversary of the Grenfell fire, in which 72 people died and a further 70 were injured, Willie Thompson, a former Grenfell resident, confronted the housing secretary, James Brokenshire. “There’s another Grenfell in the post and it is going to land on your door. You guys are doing almost nothing. Does it take another Grenfell?”

Tragically, given this government’s attitude to working people, wavering between the callous and the capricious, and a broader state of civic ennui, it might.

The state’s culpability in this regard is clear. As my colleague Robert Booth has reported, in the two years since the fire, the public inquiry into what happened at Grenfell has not reported (and will not until October); tens of thousands of people still live in blocks covered in the same highly flammable cladding; and despite Theresa May’s promise that everyone would be rehoused within three weeks, 17 families remain in temporary accommodation, with one in a hotel. Nobody has been held accountable and police investigations into potential manslaughter and health and safety violations aren’t expected until 2021.

Natasha Elcock of Grenfell United has described the lack of progress as “beyond frustrating. Is it incompetence or is it indifference?” she asked the Guardian. Two years on, it feels nigh impossible to parse the two. Indeed it seems like the latter makes the former possible. It is the government’s indifference that makes it incompetent. It’s not an issue of capacity. It could fix these things if it wanted to. But it doesn’t care enough.

In that sense, precious little has changed. From the outset Grenfell was a charred and gruesome monument to neglect. Not benign neglect – the absent-minded inattention of those who did not know, failed to prioritise or were engaged elsewhere – but malign: the knowing and wilful lack of interest of a political, rentier and media class that were aware of the issues but unmoved until tragedy forced them to respond.

That was true in an immediate sense. The tenants had warned the landlord of the potential for disaster and the landlord had ignored them, most blatantly in the grimly lucid warning, seven months before the fire, from the tenants’ organisation, Grenfell Action Group: “[We] have reached the conclusion that only an incident that results in serious loss of life … will allow the external scrutiny to occur that will shine a light on … the malign governance of this non-functioning organisation.”

But it was also true in a broader metaphorical sense. The protective cladding – lethal to those who lived in it, decorative to the mostly wealthy neighbours who had to look at it – said it all. This is the country we now live in. This fatal blaze in the heart of Britain’s wealthiest borough signalled the brazen arrival of the four horsemen of late-stage capitalism: inequality, austerity, deregulation and privatisation.

All illusions about where that toxic blend of policies and trajectories might lead went up in flames that night. With austerity causing an estimated 130,000 preventable deaths since 2012, putting profit before people is a principle some are willing to champion to death. But politicians are rarely directly confronted with the human cost of their ideology on such a scale. When they are, they are likely to gag like a meat-eater in an abattoir. May’s refusal to meet survivors in the days immediately following the fire was emblematic of her inability to engage, empathise or relate.

There’s an obscenity to the Tory leadership race, in which candidates parade their tax-cutting credentials when the need for more social housing, safety inspectors and housing officers is so painfully evident.

But to blame this entirely on the government and Conservatives would be too easy. The Grenfell fire took place less than a week after the last election, and in the last seat to declare a result – a shocking 20-vote victory to Labour in a seat no one imagined it had a chance in at the outset. Labour had campaigned against austerity; the Tories had lost their majority. Put bluntly, there was significant public pressure that went beyond those directly affected.

Part of the reason the government has managed to backslide is because that pressure was not sustained. Grenfell is not alone in this regard. The same thing has happened with Windrush – which pricked the national conscience for a few weeks and then receded from the conversation. But just because people stop talking about an injustice doesn’t make the injustice disappear – indeed, it’s precisely because they stop talking about it that it’s liable to persist.

Within a year of the scandal breaking, Amber Rudd was back in the cabinet and the government had resumed the deportations of people who had every right to be here. Meanwhile, only 13 people have been given any assistance from the hardship fund set up to help Windrush victims struggling with destitution since they were illegally and improperly stripped of their citizenship. That’s just one more person than the number who were wrongly deported and then died before the government could even apologise.

Just last week Glyn Williams, the architect of the “hostile environment” policy that made the Windrush scandal possible, was made knight commander of the order of Bath in the honours list.

The nation’s capacity for indignation is apparently rivalled only by its propensity for distraction. It’s not that we don’t see injustice or cannot comprehend it. It’s that we apparently get bored by it. We are becoming very careless with our innocence: we keep losing it, only to find it again in time to be “shocked” by the next outrage.

Grenfell was not only predictable, it was predicted. It did not “take” that tragedy to teach us what happens when negligent landlords and shoddy builders come together in an age of cost-cutting and regulatory ambivalence. We already knew. But it has raised the question whether we, as a society, cared enough to do anything about it. So long as a similar tragedy could happen tomorrow, the answer is a shameful no.