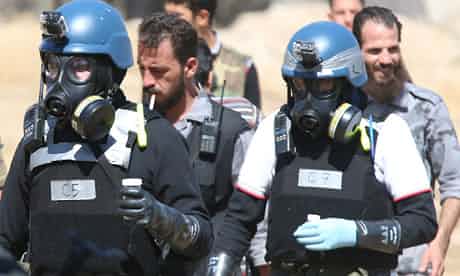 The US has little credibility left: Syria won't change that
The Guardian,
Photograph: Stringer/REUTERS

'I created Transjordan," Winston Churchill once boasted, "with a stroke of a pen one Sunday afternoon in Cairo." Take a look at what remains of Jordan 90 years later and you can see how. Straight borders drawn with a ruler carve indifferent frontiers through a complex region with the kind of callous colonial hubris that displayed scant regard for linguistic, ethnic or religious affiliation.

Much of the contemporary turmoil in the Middle East owes its origins to foreign powers drawing lines in the sand that were both arbitrary and consequential and guided more by their imperial standing than the interests of the region. The "red line" that president Barack Obama has set out as the trigger for US military intervention in Syria is no different.

He drew it unilaterally in August 2012 in response to a question about "whether [he envisioned] using US military" in Syria. "A red line for us is we start seeing a whole bunch of chemical weapons moving around or being utilised. That would change my calculus. That would change my equation."

On 21 August there was a chemical weapons attack outside Damascus believed to have been carried out by the Syrian government. That changed both Obama's calculus and his memory. "I didn't set a red line," he claimed last week. I didn't draw it, he insisted, everybody did. "The world set a red line".

This was news to the world, which, over the weekend, sought to distance itself from his line, as the US president doubled-down on his double-speak.

The alleged urgency to bomb Syria at this moment is being driven almost entirely by the White House's desire to assert both American power and moral authority as defined by a self-imposed ultimatum. It is to this beat that the drums of war are pounding. But thus far few are marching. The American public is against it by wide margins. As a result it is not clear that Congress, whose approval he has sought, will back him. The justification and the objectives for bombing keep changing and are unconvincing. He has written a rhetorical cheque his polity may not cash and the public is reluctant to honour. On Tuesday night he'll make his case to a sceptical nation from the White House.

Before addressing why people are right to be sceptical, it is necessary to attend to some straw men lest they are crushed in the stampede to war. The use of chemical weapons is abhorrent and the Syrian regime is brutal (whether it used chemical weapons in this case or not). With more than 100,000 dead in the civil war, diplomatic efforts have clearly not been successful thus far. Those who claim the principles of human solidarity and internationalism should not sit idly by while the killing continues. Nobody can claim, with any integrity, that they have a plan that will stem the bloodshed.

But the insistence that a durable and effective solution to this crisis lies at the end of an American cruise missile beggars belief. It is borne from the circular sophistry that has guided most recent "humanitarian interventions": (1) Something must be done now; (2) Bombing is something; (3) Therefore we must bomb.

The roots of this conflict are deep, entangled and poisoned. Arguments against the Syrian regime and the use of chemical weapons are not the same as arguments for bombing. And arguments against bombing are not the same as arguments to do nothing. That is why most remain unconvinced by the case for military intervention. It carries little chance of deterring the Syrian regime and great risk of inflaming an already volatile situation. Intensifying diplomatic pressure, allowing the UN inspectors to produce their report while laying the groundwork for a political settlement between the rival factions, remains the best hope from a slender range of poor options.

The problem for America in all of this is that its capacity to impact diplomatic negotiations is limited by the fact that its record of asserting its military power stands squarely at odds with its pretensions of moral authority. For all America's condemnations of chemical weapons, the people of Falluja in Iraq are experiencing the birth defects and deformities in children and increases in early-life cancer that may be linked to the use of depleted uranium during the US bombardment of the town. It also used white phosphorus against combatants in Falluja.

Its chief ally in the region, Israel, holds the record for ignoring UN resolutions, and the US is not a participant in the international criminal court – which is charged with bringing perpetrators of war crimes to justice – because it refuses to allow its own citizens to be charged. On the very day Obama lectured the world on international norms he launched a drone strike in Yemen that killed six people.

Obama appealing for the Syrian regime to be brought to heel under international law is a bit like Tony Soprano asking the courts for a restraining order against one of his mob rivals – it cannot be taken seriously because the very laws he is invoking are laws he openly flouts.

So his concerns about the US losing credibility over Syria are ill-founded because it has precious little credibility left. The call to bomb an Arab country without UN authority or widespread international support, on the basis of partial evidence before UN inspectors have had a chance to report their findings, sounds too familiar both at home and abroad. The claim that he should fight this war, not the last one, is undermined by the fact that the US is still fighting one of the last ones. And with a military solution proving elusive in Afghanistan, the US is trying to come to a political settlement with the Taliban before leaving.

Obama would enhance US credibility not by drawing lines for others to adhere to, but by drawing a line under the past and championing a foreign policy that bolstered international law and acted with the rest of the world rather than ignoring it. "The noble art of losing face," Hans Blix told me shortly after the Iraq war started, "will one day save the human race."