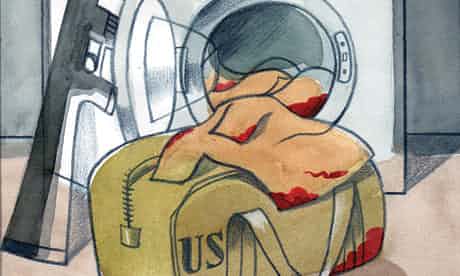 The US is blind to the price of war that is still being borne by the Iraqi people
The Guardian,
Illustration by Toby Morison

On 19 November 2005 a US marine squad was struck by a roadside bomb in Haditha, in Iraq's Anbar province, killing one soldier and seriously injuring two others. According to civilians they then went on the rampage, slaughtering 24 people. They included a 76-year-old man in a wheelchair and a three-year-old child. It was a massacre. "I think they were just blinded by hate … and they just lost control," said James Crossan, one of the injured marines.

When he heard the news, Major General Steve Johnson, the American commander in Anbar province at the time, saw no cause for further examination. "It happened all the time … throughout the whole country. So you know, maybe, if I was sitting here [in Virginia] and heard that 15 civilians were killed I would have been surprised and shocked and done more to look into it. But at that point in time I felt that it was just a cost of doing business on that particular engagement."

Eight soldiers were originally charged with the atrocity. Charges against six were dropped, one was acquitted and the other is awaiting trial. We know this because a New York Times reporter found documents from the US military's internal investigation in a rubbish dump near Baghdad. An attendant was using them to make a fire to cook smoked carp for dinner.

The article ran on the same day that Barack Obama announced the withdrawal of American troops last week, hailing the almost nine-year war a "success", resulting in "an extraordinary achievement" that the troops can look on "with their heads held high". And so it is that America moves on, casting evidence of its war crimes in the trash, holding nobody accountable and choosing to understand defeat as victory and failure as success.

While the departure of American troops should be greeted with guarded relief (guarded because the US will maintain its largest embassy in the world there along with thousands of armed private contractors), every effort must be made to thwart those who seek to embellish and distort their lamentable legacy. You'd think that would be easy. The case against this war has been prosecuted extensively both in this column and elsewhere. (The argument that the removal of Saddam Hussein somehow compensates for the lies, torture, displacement, carnage, instability and humans rights abuses is perverse. They used a daisy cutter to crack a walnut.)

This war started out with many parents but has ended its days an orphan, tarnishing the reputations of those who launched it and the useful idiots who gave them intellectual cover. Nobody has been held accountable; few accept responsibility.

In any case, they could not have done it alone. It was only possible thanks to the systemic collusion of a supine political class and a jingoistic political culture, not to mention a blank cheque from the British government. When the war started, almost three-quarters of Americans supported it. Only politicians of principle opposed it – and there were precious few of those. When Nancy Pelosi was asked why she had not pushed for impeachment of Bush when she became speaker in 2006 she said: "What about these other people who voted for that war with no evidence … Where are these Democrats going to be? Are they going to be voting for us to impeach a president who took us to war on information that they had also?"

Today, withdrawing the troops is about the only truly popular thing Obama has done in the last two years. Polls show more than 70% support withdrawal, roughly two-thirds oppose the war, and more than half believe it was a mistake. But there is a difference between regretting something and learning from it. And while there is ample evidence of the former, there is little to suggest the latter.

According to Christopher Gelpi, a political science professor at Duke University who specialises in public attitudes to foreign policy, the most important single factor shaping Americans' opinions about any war is whether they think America will win. This solipsistic worldview is hardly conducive to the kind of introspection that might translate remorse into redemption.

It's a mindset that understands the war in Vietnam as being wrong not because an independent country was invaded, flattened, millions murdered and thousands tortured. It was wrong because the US lost.

"It is the end for the Americans only," wrote Emad Risn, argued an Iraqi columnist in a government-funded newspaper. "Nobody knows if the war will end for Iraqis too." And few Americans seem to care. It's been some time since Iraq featured at all on the nation's priorities, let alone high. Rightly Americans fret about the fate of veterans returning to a depressed economy with a range of both physical and mental disabilities. But Iraqi civilians barely get a look-in.

According to the New York Times report, among the discarded testimony was an interview with Sergeant Major Edward Sax. "I had marines shoot children in cars, and deal with the marines individually, one on one, about it because they have a hard time dealing with that." When they told him they didn't know there were children on board he told them they were not to blame, claiming killing would impose a lifelong burden on them.

Progressives, seeking to link the economic collapse to military misadventure, often argue that nation building should begin at home, not in Iraq, thereby – wittingly or not – transforming Iraqis in the public imagination from victims of illegal warfare to recipients of illicit welfare. Without any apparent irony, Obama marked the end of the occupation by calling on others not to meddle in Iraq's internal affairs.

The combined effect of all of this is like breaking someone's jaw with your fist only to bemoan the excruciating pain that has been visited on your hand.

America is not alone in this. Amnesia and indifference are the privileges of the powerful. It is for the Kenyans and Algerians to recall the atrocities committed by the British and French under colonialism while the colonisers remain in flight from their history. "The essential characteristic of a nation is that all its individuals must have many things in common," wrote the 19th-century French philosopher Ernest Renan, "and must have forgotten many things as well."

No wonder then that a recent Pew poll found that despite all the evidence to the contrary 56% of Americans said they thought the invasion had succeeded in its goals while the number of those who think the invasion was the right decision stands at its highest in five years. The cost of doing business always seems more reasonable when someone else is paying the price.

follow on twitter
RT @nytimes: A Black professor who studies housing discrimination had his house appraised: $472,000. He then did a “whitewashing experiment…
RT @MCRSociology: Gary Younge discusses identity politics and America with Will Hutton in this episode of @thewesocietypod https://t.co/72…
RT @mart_welton: Congratulations to all those getting their A-level results today. If you have BBB at A-level or above you can still apply…
RT @BernardineEvari: Please follow the groundbreaking online #MuseumofColour UK, founded by the unstoppable Samenua Sesher. The 1st gallery…
RT @EthnicityUK: Gary Younge is interviewed by @sonikkalogan about his work on racism and gun violence in @the_hindu #DataPoint podcast. h…
RT @thefreedomi: 🚨 NEW: Saudi women’s rights activist & academic Salma al-Shehab was sentenced to 34 years in prison + 34 year travel ban f…
RT @LRB: #DawnFosterForever! On Thursday 15 September at the @LRBbookshop, @BizK1, @piercepenniless, Lynsey Hanley and @garyyounge will d…
RT @ShowunmiV: This is how we support Black women and girls https://t.co/8YmgV21zHo
RT @sonikkalogan: It's #DataPoint Pod Thursday! In this week's episode, I talk to @noraneus, @garyyounge and @Casey_J_Wooten about the U.S.…
RT @bgnoiseuk: Next month, @LRBbookshop will host an event to celebrate the life and work of Dawn Foster with @BizK1, @piercepenniless, Lyn…
© Gary Younge. All Rights reserved, site built with tlc
Buy cheap proscar online Buy real caverta online Generic avapro cost Can you buy avalide over the counter usa Buy cardizem online canada How to get renagel online Generic lamisil prices Can you buy seroquel without a prescription Addyi online in india Apple cider vinegar and metformin together