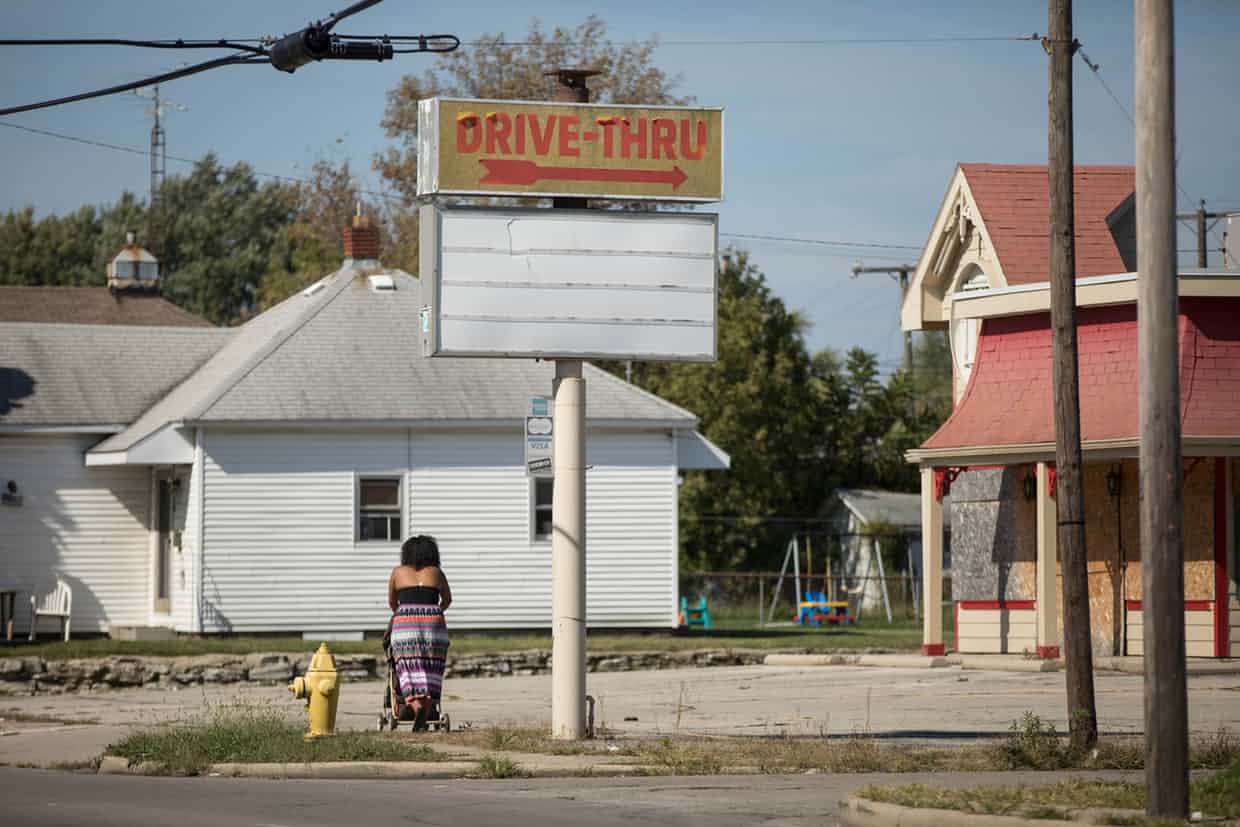 The view from Middletown: voters seem embarrassed – not angry
The Guardian,
Photograph: David Levene for the Guardian

For the most part the midwestern landscape is as flat and appealing as a warm Pepsi. But the hour-long drive from Indianapolis airport to Muncie into a fall dusk lends it a rustic, russet charm – as though someone took America’s breadbasket and decorated it for a harvest festival.

In the inside cover of Middletown in Transition, the second of the iconic sociological series on Muncie written after the Depression, a map lays out the human geography of the town. To the northwest of the railroad tracks lies “homes of business class” and a small college and hospital; to the north east of the tracks is the “Negro” area; to the south of the tracks and river is “homes of working class”.

“You could take this map and lay it on the town today and it’s just the same,” says James Connolly, the director of the Center for Middletown Studies at Ball State University which occupies a far bigger section of the northwest than it did in the map and is now the town’s largest employer.

On a tour of the town with Kelsey Timmerman, a local author and community activist (though I doubt he’d describe himself that way) whom I met on Twitter, I saw that map come to life.

We slowed down to the speed of a funeral cortege to stare at the desolate expanses of closed down factories and depots. Muncie used to host plants that mostly made transmissions for cars. During the 1960 campaign John F Kennedy addressed workers at the BorgWarner factory, which is now abandoned.

“The hurt is real,” explains Kelsey. “This is the first generation where many children have less opportunities than their parents did.” Skilled union jobs have gone. According to the census a third of the town lives below the poverty line, while white male earnings have slumped dramatically since 2000. 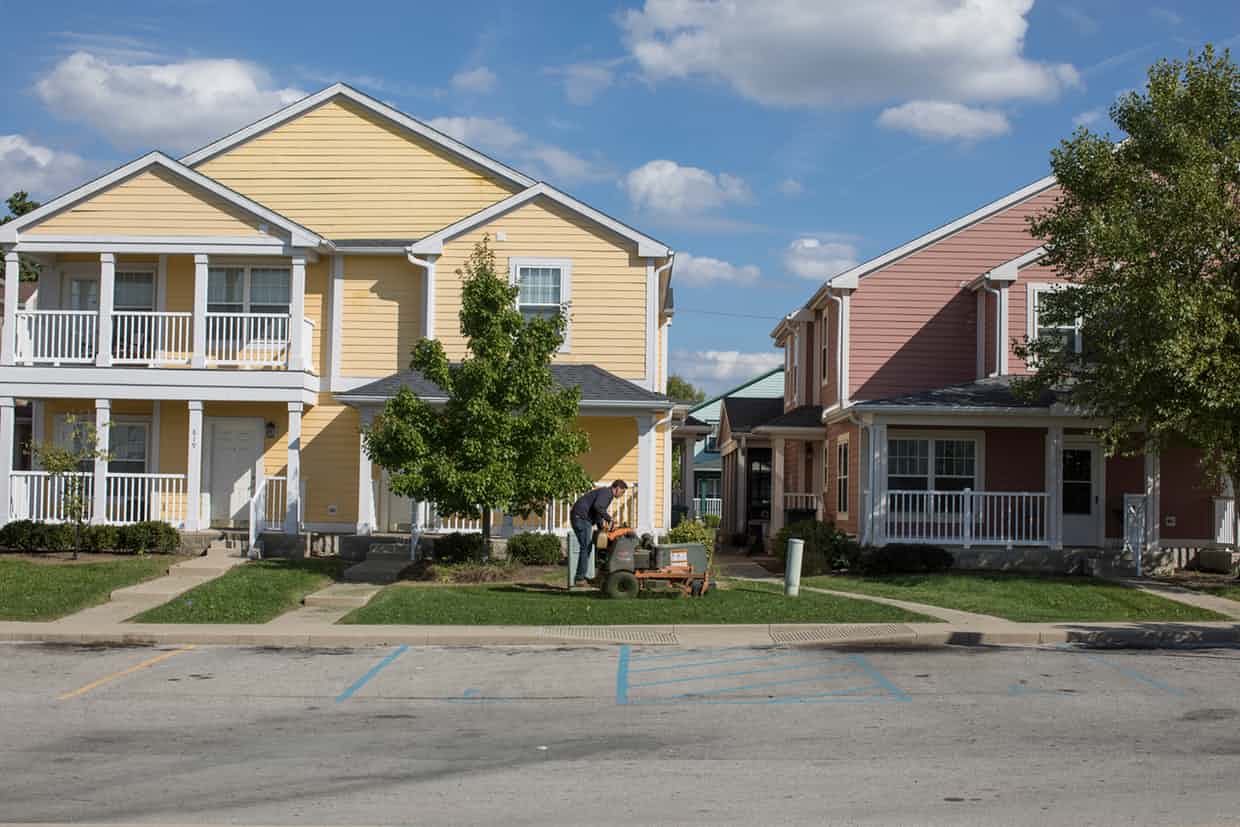 Kelsey, whose books makes the connection between our daily lives – like what we wear and what we eat – and globalisation, is keen to emphasise that good things are happening too, like an abandoned factory being turned into a “maker’s space” for artists and entrepreneurs. But he explains how economic and racial segregation in the town creates a “poverty of community” even when there is a “relative wealth of resources”.

“I don’t know what would have brought me here [if it were not for the community schemes I’m involved in],” he says as we drive through the white, working class southside. “Many people have strong opinions about the south side of town although they’ve never been to the south side of town.”

The small downtown is being renovated. Since every time I’ve asked people where to meet so far, they’ve suggested the Caffeinery, a coffee shop in the centre, I’m thinking of turning into my second office beyond my hotel room. On Monday, when the first in this series appeared, a man approached me with his lap top and bearing my picture above the series. “Is this you,” he asked. “Yes,” I said. “You guys took a picture of my house,” he said. Thankfully he was chuffed rather than irritated.

In the short time I’ve been here I’ve heard lots of things: high profile conservatives, Koch brothers and John Schnatter (CEO of Papa Johns Pizza), have donated $3.25m to BSU for an Institute for Entrepreneurship and Free Enterprise; the FBI is investigating Muncie city government over possible wrongdoing; there is a huge drug problem here, particularly with meth and prescription drugs; tensions between the university community and others. I’ve heard about them, but have not been here long enough to do more than list them.

A reader from Muncie who responded to our call out advised: “Investigate racism in Muncie; racism is so ingrained in the fabric of rural Indiana that the people who perpetuate it cannot recognize it themselves.” Another said: “I have lived in Muncie for three years. Anecdotally, it is the most racially peaceful city I have ever been in, and I have lived abroad too. A long time Muncian told me there is a divide between north side and south side, but as far as blacks and whites getting along, there is great community.” It’s possible they’re both right. It’s too soon to tell.

Arriving in Muncie shortly before Sunday’s presidential debate, with my Twitter-inspired attempts to find a debate-watching party floundering, I took a recommendation and headed to the Fickle Peach – a downtown bar with an impressive choice of craft beers. 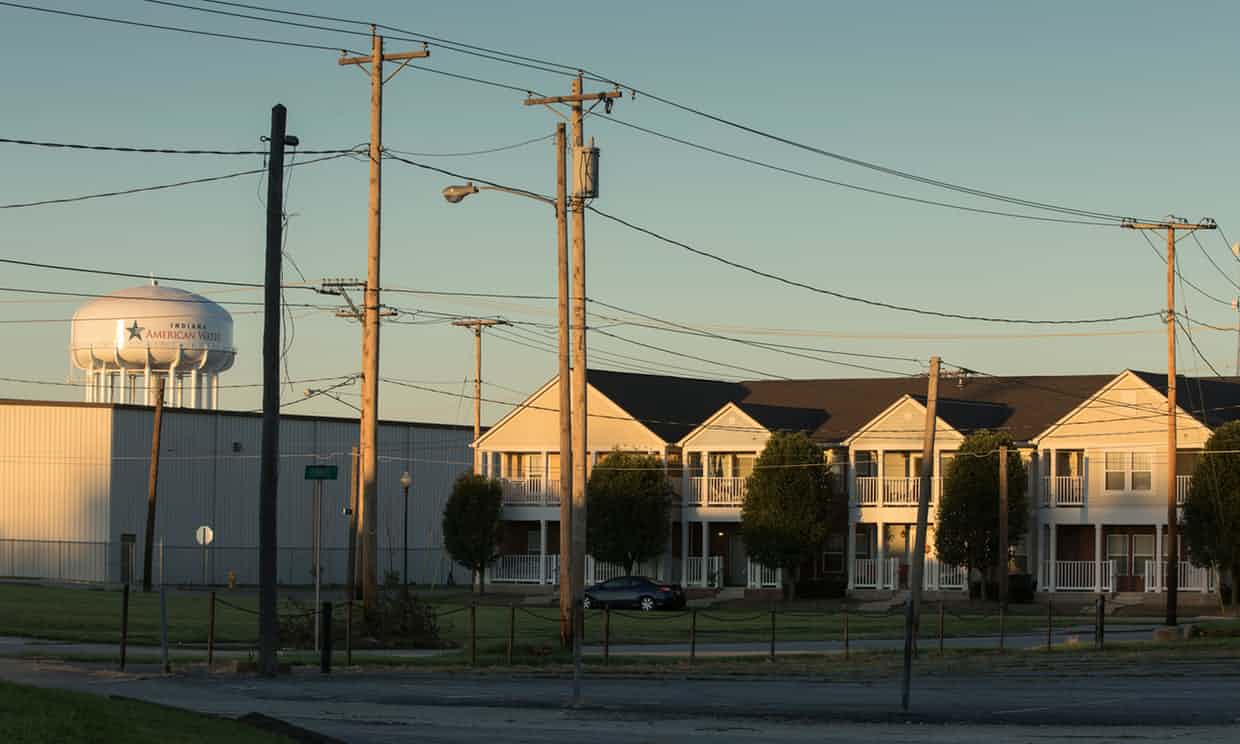 Sunday is a slow night in the Fickle Peach: the slowest probably. Tuesdays is trivia night and Friday, from 4.30pm, the happy hour is hopping, I’m told. There were only about 15 people there and the three screens by the bar were set to either Sunday night football or baseball. The barman was kind enough to change station for me and, once he’d worked out the closed captioning so as not to kill what little mood there was, I watched the debate, with one other customer, with the sound down. (I’ve since seen it with the sound up and I preferred it the first time.) None of the other customers paid the slightest interest.

Since then it’s been intriguing how rarely the presidential election comes up unless I bring it up. I’ve overheard a couple people talking about it. (“He’s a moron,” said one young man to his partner in the Fuji, a sushi and hibachi restaurant. “But he gets me and why I’d be pissed at immigrants taking the $12 hour a jobs from people like me.”) I’ve seen some lawn signs – mostly for Trump. But it’s not as though the place is buzzing with it.

At a rally on Tuesday night for John Gregg, the Democratic candidate running to become Indiana’s state governor, he didn’t mention the presidential race (unless I missed it in the first couple of minutes as I drove in circles looking for parking) and nor did any of the questioners. When I do bring it up, people seem informed and engaged, but less than a month before polling day and in the wake of a debate and the hot mic scandal, Trump v Clinton is not where conversation would naturally flow.

This is just my third day. I’ve been here long enough to glean a first impression and short enough for those impressions to be proved partial and mistaken. There’s a good reason why the presidential election might not come up as often here. It’s Indiana. With the exception of Obama’s narrow victory here in 2008 and Lyndon Johnson’s in 1964 Indiana has voted Republican in every election since the second world war. Mike Pence, Donald Trump’s running mate, is the state’s governor. Trump’s lead here is comfortable, whereas the down-ticket races for governor and senator are competitive.

Meanwhile, interest often wanes for the second debate and, while nationally viewership dipped more than usual, for all I knew most of Muncie could have been watching it at home.

But there is, I think, something else going on. I sense that people are a little – or maybe even a lot – ashamed of this election. When I’ve raised it a couple of times they have arched their eyebrows; one woman (I’ll spare her blushes) snorted, failing to suppress her derision. It’s not a response I’ve seen at this stage in an election cycle before, even outside of the swing states. The first race I ever covered, between Bill Clinton and Bob Dole, people were bored and weary, in others they have been angry, impassioned or conflicted. But this feels different.

Or as Sarah Deitz, 20, a Ball State student reading public relations who was at the Gregg rally, said: “I don’t think it’s very representative ... It feels embarrassing.”

follow on twitter
RT @nytimes: A Black professor who studies housing discrimination had his house appraised: $472,000. He then did a “whitewashing experiment…
RT @MCRSociology: Gary Younge discusses identity politics and America with Will Hutton in this episode of @thewesocietypod https://t.co/72…
RT @mart_welton: Congratulations to all those getting their A-level results today. If you have BBB at A-level or above you can still apply…
RT @BernardineEvari: Please follow the groundbreaking online #MuseumofColour UK, founded by the unstoppable Samenua Sesher. The 1st gallery…
RT @EthnicityUK: Gary Younge is interviewed by @sonikkalogan about his work on racism and gun violence in @the_hindu #DataPoint podcast. h…
RT @thefreedomi: 🚨 NEW: Saudi women’s rights activist & academic Salma al-Shehab was sentenced to 34 years in prison + 34 year travel ban f…
RT @LRB: #DawnFosterForever! On Thursday 15 September at the @LRBbookshop, @BizK1, @piercepenniless, Lynsey Hanley and @garyyounge will d…
RT @ShowunmiV: This is how we support Black women and girls https://t.co/8YmgV21zHo
RT @sonikkalogan: It's #DataPoint Pod Thursday! In this week's episode, I talk to @noraneus, @garyyounge and @Casey_J_Wooten about the U.S.…
RT @bgnoiseuk: Next month, @LRBbookshop will host an event to celebrate the life and work of Dawn Foster with @BizK1, @piercepenniless, Lyn…
© Gary Younge. All Rights reserved, site built with tlc
How to get aricept without prescription Can you get proscar without a prescription What i should buy with casodex Tadalafil online us Get bactroban prescription Pradaxa 15 0mg capsule price How to get lioresal without prescription Buy keflex pill Lowest price zetia Online doctor motegrity