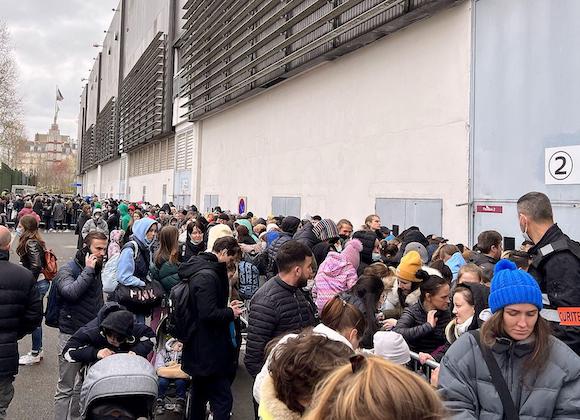 The west is responding to Ukrainians in the way that we wish it would respond to anyone else fleeing war. Now nobody can say it can’t be done

“I could fall in love with a sumo wrestler if he told stories and made me laugh,” Maya Angelou once told me. “Obviously, it would be easier if someone was African American… But if I make the effort to learn the language and respect the mores then I should be able to get along anywhere and with any kind of people. I think I belong wherever human beings are.”

Ukrainians are no better, or worse, than Syrians, Yemenis, Eritreans or Iraqis at telling people stories and making them laugh. And yet the west has fallen in love with them as refugees in a way it has proved incapable of doing with those from Africa and the Arab world. The inhumanity and hypocrisy are self-evident. In Calais, Ukrainians are put up in hotels for free while Sudanese and Eritrean teenagers are evicted from campsites by armed police. Watching footage of Ukrainians desperately trying to board trains heading west, Al Jazeera presenter Peter Dobbie explained: these are “prosperous, middle-class people. These are not obviously refugees trying to get away from areas in the Middle East… [or] North Africa.” They look “like any European family that you would live next door to.”

What is less clear, however, is whether this bleak moment offers an opportunity for a shift in how we discuss our responsibilities towards refugees, asylum-seekers and displaced people.

For well over a decade, xenophobia has run through the west’s political culture like arsenic in the water, starting on the far right and flowing into the centre. (Angela Merkel’s response to the Syrian exodus in 2015 being a glowing exception.) But suddenly compassion has become a rare currency that might help us defeat nationalism. The question is whether that currency can be converted to benefit those who do not look, or worship, like most Europeans.

This shift has proved challenging for the government. Having built a bureaucratic and rhetorical infrastructure to both pander to, and promote, the popular demand to keep immigrants out, it now finds itself under intense pressure to admit them. As Europe moved urgently to allow Ukrainians in by the hundreds of thousands, if not millions, the British government adapted its rhetoric quickly; the bureaucracy, however, has proved far less versatile, permitting (at least, as I write) a miserly trickle.

Britain came by these contradictions honestly. We are ignorant about what we do, who we are and who is here

The pressure to show more heart must be confusing for the government because it is coming, primarily, from those who have long demanded that it should be heartless. The Daily Mail, whose cartoonist portrayed vermin entering the country alongside refugees during the Syrian crisis and only a few months ago lambasted Priti Patel’s “lack of grip” on refugees crossing the Channel in rickety boats, now calls on the “human spirit” and “immense generosity” of its readers “at times of crisis,” while its sister Sunday paper asks people to “give until it hurts.”

How did we get here? During the Brexit referendum and beyond, hostility towards eastern Europeans—now claimed as kith, if not quite kin—was widespread and occasionally fatal. Meanwhile the Windrush scandal, involving the shocking treatment of Caribbean-born Britons caught in the crosshairs of the hostile environment policy, prompted outrage and ultimately cost home secretary Amber Rudd her job. At any given moment, Britain has shown its capacity to embrace whatever group of immigrants it deems to be deserving and pour vitriol on the rest. Politically, this selectivity could continue indefinitely; logically and ethically, it is unsustainable.

Britain came by these contradictions honestly. We are ignorant about what we do, who we are and who is here. We receive far fewer asylum applications per capita than the EU average—just over half the amount they do. British people also think there are twice as many immigrants as there actually are and are far less at ease with our multiracial reality than many imagine—a YouGov poll from 2020 showed almost half of black and ethnic minority adults had been asked “where are you really from?” multiple times.

That is a lot of misinformation to correct before we can start to have a meaningful conversation about meeting our international obligations to receive and support people fleeing conflict.

This is what happens when your public conversation on refugees is refracted through a colonial mindset and mediated through talk shows and tabloids. But when flickers of humanity do emerge, however faint, they prove that none of this is inevitable. If this is a hypocritical moment, it is also an instructive one. The west is responding to Ukrainians in the way that we wish it would respond to anyone else fleeing war—now nobody can say it can’t be done.

The public desire to welcome Ukrainian refugees may yet prove temporary. But so long as it exists, it offers the opportunity to recalibrate what meeting our global responsibilities to humanity might look like, if only we could expand our understanding of who qualifies as human.