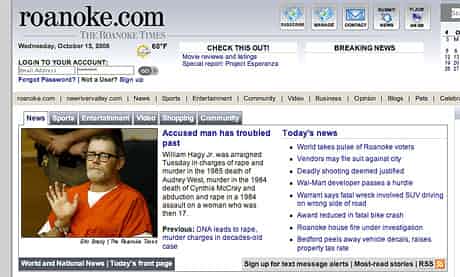 The world comes to Roanoke
The Guardian,
Photograph: Public domain

I made it. I'm on the front page of the Roanoke Times. Not the guy in the orange jumpsuit accused of rape and murder. The headline that reads "World takes Pulse of Roanoke Voters". It's a good piece (they did another piece on me just over a week ago which was a bit snotty for which I can't find a link). And though the basic thrust of the article is true, it is also deeply troubling to me.

You see, when I came here I thought I was doing something incredibly clever. Small town, swing state - most people back in the Guardian office couldn't even say it properly (they kept calling it roh-an-oke-ee but the final e is silent). It was supposed to be intrepid. Just me, local people and as many raccoons as I could shoot (with a camera that is).

Towards the end of my first week here I discovered there was a Finnish camera crew in town. But I'm the only journalist in the village, I thought. Turns out the Finns were kind of grumpy. Apparently they just stood and filmed as my friend Meghan struggled valiantly and, by all accounts, ineptly to erect a tent. Meghan is now a regular feature on Finland's funniest home videos.

But after me and the Finns came the BBC, National Public Radio, the Toronto Star and the New Yorker. Can't an intrepid foreign journalist get a little bit of privacy? For my own self-respect I am going to assume that the Finns got lost and everybody else came here because I'm here. There is no other explanation.

Meanwhile, since they've already interviewed me and I have nothing to gain, it is worth pointing out that the Roanoke Times is one of the best regional papers I've seen in this country. They actually do local news like you would want to read it. Their interest in why the rest of the world is interested tells a story.

It's a while since Virginia's been contested in a presidential election. Though it's Senate and gubernatorial races are close, those have far less interest to the international media and even, for the most part, the national media. With the Democratic presidential candidate, Barack Obama, coming here on Friday and the former president Bill Clinton having visited on Sunday they had better get used to it for at least another three weeks, and maybe another few decades.