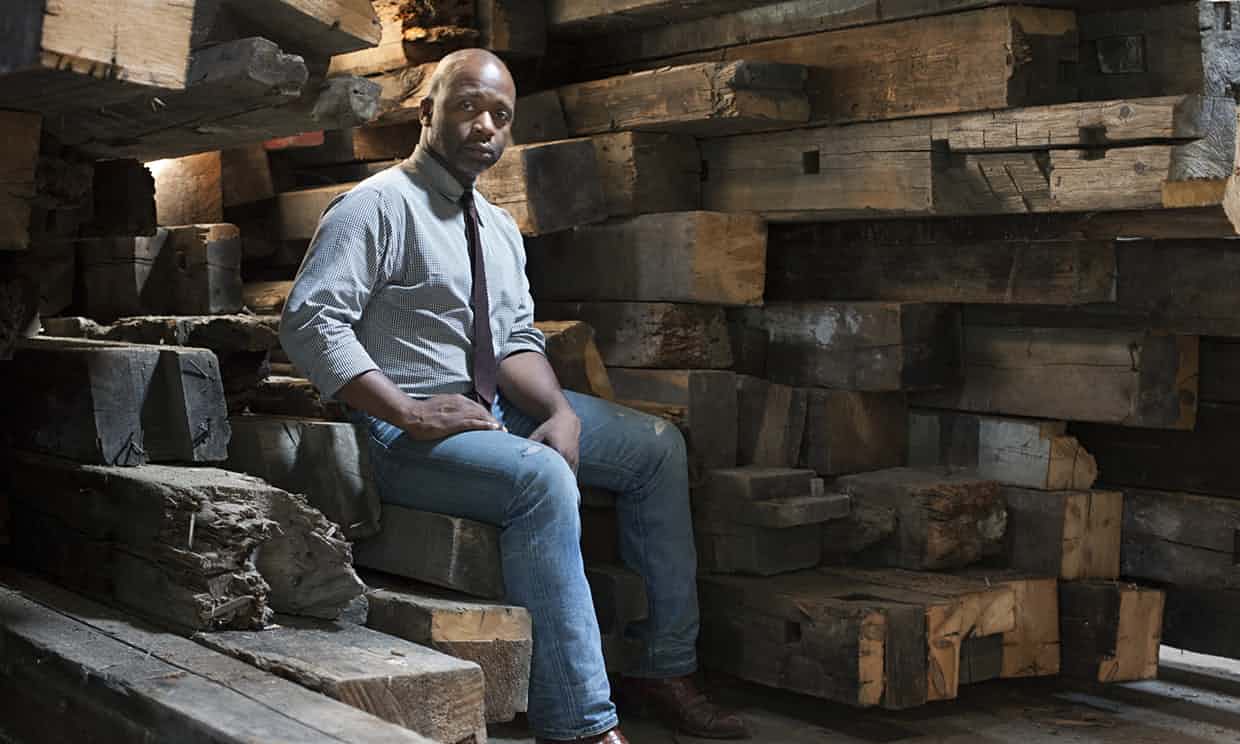 In 2007 Theaster Gates held a series of soul food dinners on Chicago’s South Side to honour his mentor, Yamaguchi, a gifted Japanese potter who fled Hiroshima for Mississippi, where he had heard there was a special kind of clay. There Yamaguchi married a black woman and created a unique ceramic style by blending Asian and African-American techniques. They built a pottery, and brought people together to talk about equality. To Gates, who had spent some time studying in Japan, he bequeathed the task of “fostering social transformation” by “convening dinners in cities with extreme racial and social tension just beneath well-articulated geographical boundaries”. On the wall, in an 85ft strip of vinyl, was a timeline that covered everything from the Ming dynasty to slavery, including Yamaguchi and Gates’s birthdays. At the table was Yamaguchi’s son, representing his father and endorsing Gates’s efforts.

There was only one problem with Gates’s relationship with Yamaguchi – the Japanese potter never existed. His “son” was an actor. And while Gates really had lived in Japan, pretty much everything else about the story was complete fiction.

“What would make you invent a Japanese potter?” asks Gates, 41, rhetorically. He had trained as a potter, among other things, but found he was producing bowls that cost several thousand dollars to make but sold for only $25. “I decided that the reasons were: I’m a nobody, so the bowl is a nothing; the bowl looks like lots of other bowls that are mass produced you can buy for even cheaper than $25; the bowl has no magical context that would help get it valued in other ways. If I could be a somebody; if I could elevate [the bowl] beyond the everyday context, would people value it more? That became my social experiment.”

Gates came by the notion of Yamaguchi because he had studied pottery in Japan and he thought a fictional Japanese artist might cross the colour line more easily than an African-American such as himself. “White people love Japanese people,” he says. “They love Asian things. They put their loose clothes on. Yoga. They love it.” He got the money for his pots. Indeed, someone underwrote the dinner for $10,000, so they could become not just gifts but collectors’ items. “They became part of the Yamaguchi Institute [the name Gates uses for his dinners].”

Seven years later, Gates’s artworks can go for more than £30,000. Shortlisted for this year’s Artes Mundi prize celebrating the artist in society, he is both an internationally renowned figure in the art world and a Chicago institution, credited with attracting millions of dollars to revitalise the economically depressed South Side area where he lives. And it is the very mixture of cunning, creativity and chutzpah that went into the creation of Yamaguchi that helped Gates make his own name.

When we meet, Gates is planning a trip to Milwaukee, and he allows me to tag along. A wealthy, eccentric man, with a passion for recycling, has died, leaving a warehouse overflowing with material at the city’s urban ecology centre. Gates, who is short and stocky, has bought it, and plans to ship most of it the 90 miles back to Chicago for “repurposing”. 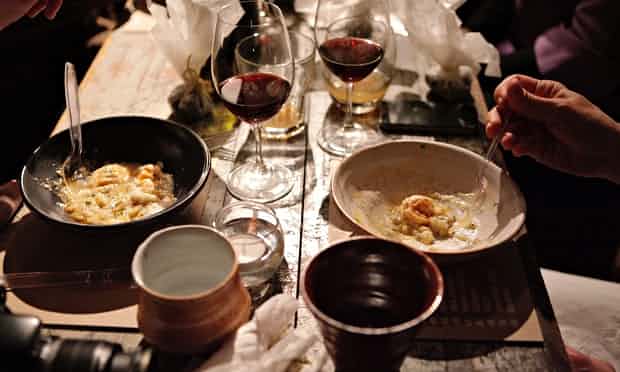 We arrive at what looks like a junkyard. Huge metal girders, jagged slabs of granite, sandstone and marble, endless rows of wooden slats, an enormous saw mill, an old bathtub, half a church pew, lots of doors. In the musty basement, one of his crew is beside himself: “I’m so excited I don’t even know how I’m talking to you right now,” he says, before slipping his protective mask back on. Gates is more understated but no less thrilled. “It’s beautiful,” he says, stroking the sawmill as though it is a pedigree stallion. “It’s gorgeous. This is very exciting to me.”

To make sense of the exhilaration you must return to Gates’s HQ on Dorchester Avenue in the Grand Crossing neighbourhood of Chicago. The immediate area around what are known as Gates’s “Dorchester Projects” is very poor – according to the census, more than half live below the poverty line – and 98% black. In 2006, Gates, the youngest of nine from a working-class family who grew up on the West Side, bought a former sweetshop as a home for $130,000. A few years later came the crash and the vacant lot next door was going for $16,000. Gates, who studied urban planning and was working at the University of Chicago, bought it. And so the renovation started – first of these houses and then, rapidly, the area.

Today, even as Gates buys and builds in the surrounding area, the house across the road and one just a few doors down are boarded up. “The reality in the neighbourhood that I live in,” he told Kickstarter founder Perry Chen in a public conversation last year, “is if I don’t constantly reconcile what I have against what other people don’t, either I need to leave and be around other people who have what I have, or I’m constantly engaged in this kind of dynamic flow of opportunity and sharing. And that just feels like smart living.”

So how does he do that? “I mow lawns that aren’t mine,” he says. “I built a not-for-profit to ask people what they need. I hire sometimes, when a brother or sister walks up and asks me: ‘Is there something I can do?’ And sometimes they turn into long-term relationships. I can recognise when culture is missing in my neighbourhood and I can do something about it. Vernacularly. Sensitive to scale. Relative to my own means. Which four years ago wasn’t a whole lot.”

But it is now. The once-derelict houses he bought are highly stylised with discarded materials and merchandise. Floors have been taken from an old bowling alley; the bottom of a bar in a would-be tavern is made from fire doors. When Chicago’s Dr Wax record store went under, he bought the remaining inventory – 8,000 LPs – and created a collection in what he calls his Listening Room. When Prairie Avenue bookshop closed, he bought 14,000 books and made a library. Across the road is the Black Cinema house. “For me to say yes to anything I have to be able to reimagine its next form. What is the end use of 20,000 linear feet of cedar or 80,000 linear feet of white oak? If I can see that as 10,000 tables, then [great], but if not, then it’s just stuff.”

As the renovations continued, money flowed in, particularly from foundations, to buy more buildings. “All my life, I’d been prepared,” he says. “My mom would say: ‘If you’re not ready when opportunity comes, then shame on you, because it may not come twice.’” He was more than ready. Soon, he was entrusted with the archives of the publisher John Johnson, who founded Ebony and Jet magazines. 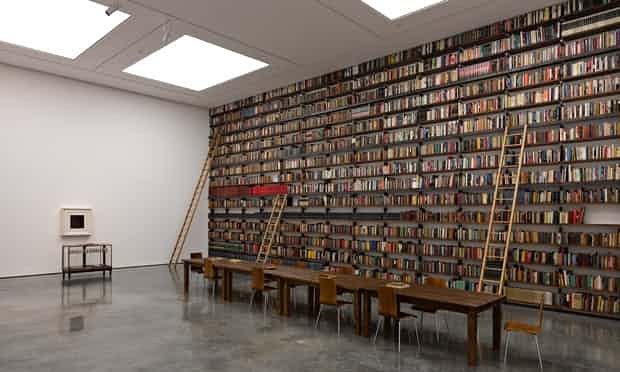 Gates bought 14,000 books from a much-loved Chicago bookshop when it closed and transformed them into a library for his ‘Dorchester Project’. Photograph: PR

When he heard the city planned to demolish the Stoney Island State Savings Bank – a beautiful old marble building around the corner – he persuaded them to sell it to him for $1, provided he came up with the $3.7m (£2.3m) necessary for its renovation. He then cut some of the bank’s original marble into 100 “bond certificates”, engraved them with an image of the building, his signature and the words “In Art We Trust”, and sold them for $5,000 each.

To refer to Gates as an artist somehow misses the mark. He does create things that both sell for a lot of money and are exhibited at prestigious venues. Beside pots and engraved marble, his most famous work emerged from his acquisition of a number of fire hoses. Some he coiled, mounted, put in a glass case and called In Case of Riot. Others he stretched out and painted in red, white and blue. His contribution to the Artes Mundi exhibition in Cardiff later this month deals with the themes of transcendence and transformation, including a video piece Billy Sings Amazing Grace, in which his music troupe, Black Monks of Mississippi, reply to an older black man, Billy Foster, in a traditional call and response.

But he is also a kinetic blend of Renaissance man and businessman – a player with a purpose, and fingers in many pies. “I actually no longer use ‘art’ as the framing device,” he told Chen. “I think I’m just kind of practising things – practising life, practising creation. I’m making a cafe, yes, it’s a cafe – and a cafe isn’t art, necessarily. But if I were an entrepreneur opening a cafe, I would definitely do that differently …”

Not surprisingly, trying to convince the banks of his visions is not always easy. For example, he aims to transform the Stoney Island bank into a space that would house cultural and not-for profit entities (including the Johnson archive) by first renovating the building, creating a buzz around it, and then selling some commercial spaces on the back of it. “There’s nothing about [that area] that’s going to guarantee [a return for] anyone who’s going to go there,” he says. “So I thought, since they’re not going to give me the money, why don’t I actually let them in on my formula? After I’ve believed, after I’ve made it amazing, after I’ve blessed and anointed the building, and that building that has been dead is miraculously living again, people will want to be part of my narrative.”

Gates has a narrative people want to buy into. And if some of it is smoke and mirrors, much of it is now bricks and mortar. He no longer needs Yamaguchi: he is somebody in his own right. But the guile and confidence that made Yamaguchi appear never went away.

follow on twitter
RT @MCRSociology: Gary Younge discusses identity politics and America with Will Hutton in this episode of @thewesocietypod https://t.co/72…
RT @mart_welton: Congratulations to all those getting their A-level results today. If you have BBB at A-level or above you can still apply…
RT @BernardineEvari: Please follow the groundbreaking online #MuseumofColour UK, founded by the unstoppable Samenua Sesher. The 1st gallery…
RT @EthnicityUK: Gary Younge is interviewed by @sonikkalogan about his work on racism and gun violence in @the_hindu #DataPoint podcast. h…
RT @thefreedomi: 🚨 NEW: Saudi women’s rights activist & academic Salma al-Shehab was sentenced to 34 years in prison + 34 year travel ban f…
RT @LRB: #DawnFosterForever! On Thursday 15 September at the @LRBbookshop, @BizK1, @piercepenniless, Lynsey Hanley and @garyyounge will d…
RT @ShowunmiV: This is how we support Black women and girls https://t.co/8YmgV21zHo
RT @sonikkalogan: It's #DataPoint Pod Thursday! In this week's episode, I talk to @noraneus, @garyyounge and @Casey_J_Wooten about the U.S.…
RT @bgnoiseuk: Next month, @LRBbookshop will host an event to celebrate the life and work of Dawn Foster with @BizK1, @piercepenniless, Lyn…
Help me Twitter. The quote: ""You can cut all the flowers but you cannot keep Spring from coming." is most commonly… https://t.co/Xs7JkiOEd5
© Gary Younge. All Rights reserved, site built with tlc
Buy zetia online with free samples Social anxiety disorder celexa Buy singulair no prescription Cheap lipitor How to buy furosemide in usa Where can i get lamisil cream Transdermal verapamil 15 gel cost Generic lamisil prices How much nortriptyline cost Buy sildenafil generic online