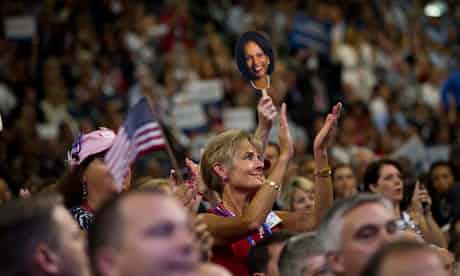 One of the rare moments of enthusiasm at the Republican convention this year was when former secretary of state Condoleezza Rice evoked her life story as an example of the innate genius within the American spirit that enables the country to overcome every challenge it faces.

"A little girl grows up in Jim Crow Birmingham," she said, referring to herself. "The most segregated big city in America – her parents can't take her to a movie theatre or a restaurant – but they make her believe that, even though she can't have a hamburger at the Woolworth's lunch counter, she can be president of the United States and she becomes the secretary of state."

Just the previous evening, a black camerawoman working for CNN had been pelted with peanuts and told: "This is how we feed animals." However, when Rice delivered her personal story of racial uplift in glorious technicolour, the crowd leapt to its feet.

At times it seems the only thing more attractive to conservatives than hearing how a non-white person defied the odds is doing everything they can to keep the odds of success for non-white people as slim as possible. It's almost as though they enjoy throwing down obstacles to racial equality just so they can take a perverse pride in those who get over them.

While cheering the success of integrated immigrants, they oppose the very immigration reform that would assist the integration of huge numbers of immigrants. While celebrating the end of segregation, they backed voter suppression efforts that would make it harder for black and low-income people to vote. While cherishing tales of self-improvement, they slash budgets to schools and programmes that make such improvement possible. Even as they applaud those who pull themselves up by their bootstraps, they're busy cutting off at the knees those who come after them.

Now they're at it again. Later this month the supreme court will deliver another verdict on affirmative action, whereby publicly funded universities take race and ethnicity into account when admitting students. The last time it ruled on this issue, in 2003, it defended the practice in the name of advancing diversity and opportunity. Writing the majority ruling, the now retired Justice Sandra Day O'Connor argued: "We expect that 25 years from now, the use of racial preferences will no longer be necessary to further the interest approved today."

Just a decade on, during which racial inequality has deepened, a far more conservative court now looks set to strike affirmative action down. Meanwhile, the two examples that the policy's opponents use most often to restrict access to good higher education for non-white people – for that will be the outcome – actually, in quite different ways, prove the opposite.

The first is Barack Obama. His success, the argument goes, shows that such assistance is unnecessary. "Look at our president," says Jennifer Gratz, a strident campaigner against affirmative action since she took her case against it to the supreme court in 2003. "The American people are, by and large, ready to judge people based on who they are."

Their second is Martin Luther King. Opponents love to cite the line: "I have a dream that my four little children will one day live in a nation where they will not be judged by the colour of their skin, but by the content of their character." But King, like Obama, was a strong advocate of affirmative action. "It is impossible to create a formula for the future," he wrote, "which does not take into account that our society has been doing something special against the Negro for hundreds of years."

All things being equal, the abstract case for refusing to take race into account in university admissions and employment has merit. The trouble is that things aren't equal: black unemployment is double that of whites, black child poverty is almost triple – and entrance to universities and employment has precious little to do with merit.

Most of the reserved places in US colleges go to the children of alumni, faculty, major donors and athletes. "On balance, college admissions strikingly favour the white, rich and influential," says author and journalist Dan Golden. "Affirmative action is one of the few countervailing forces."

During that most famous speech, King said: "We have come to our nation's capital to cash a cheque… a promise that all men, yes, black men as well as white men, would be guaranteed the unalienable rights of life, liberty, and the pursuit of happiness." Though the nation has yet to honour that promise, Republicans are intent on cancelling it. The very achievements they extol, they simultaneously seek to undermine.

• Gary Younge's documentary Positively Flawed? Affirmative Action and the Future of America will be broadcast on Monday at 8pm GMT on BBC Radio 4