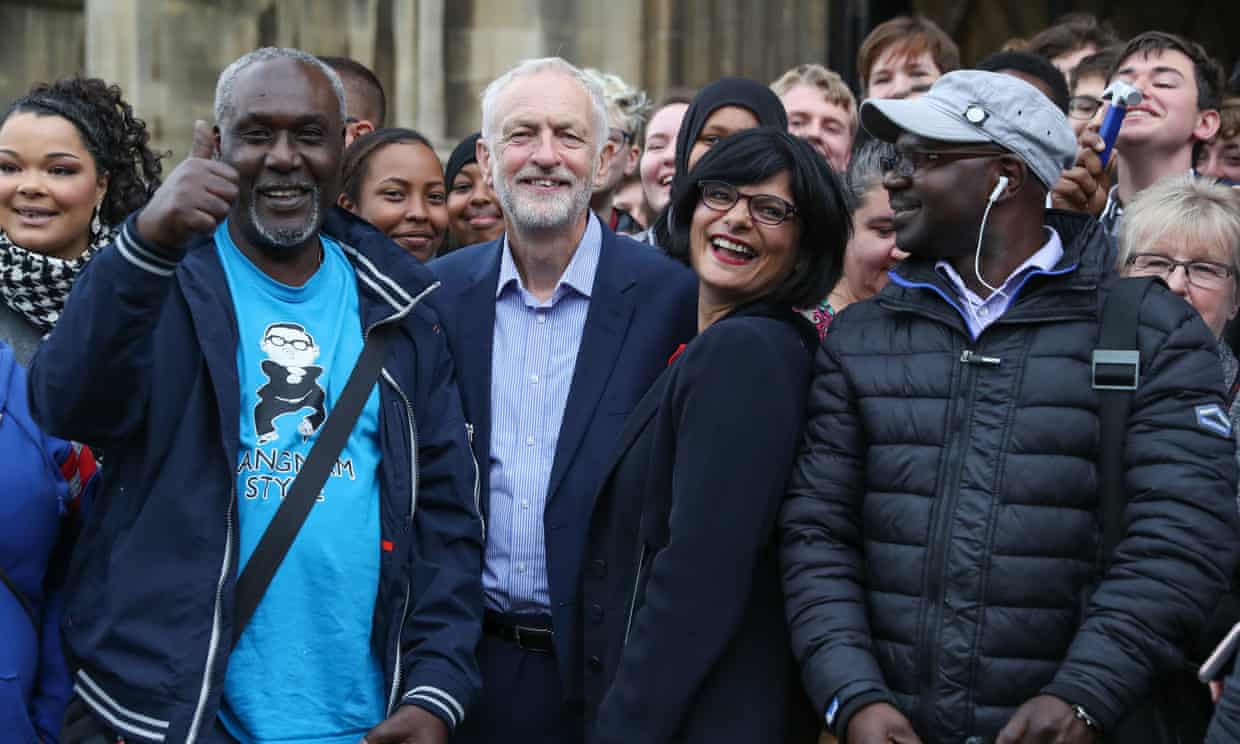 During May’s local elections, Ilford Conservative party printed and distributed a leaflet with no policies and no achievements, bearing the headline, “What we’re doing/have done for ward/area name”. It had mistakenly put out a template. Underneath came numbered bullet points next to a list of what were intended to be accomplishments, which began: “Issue 1 We’ve done: Three lines of text about what issues/projects/policies you’ve already done or are doing or will be doing in your ward/area.” It continued all the way up to Issue 4.

Since the Brexit referendum, the Conservatives have conducted themselves less like a party fit to govern than a calamitous metaphor fit for a meme. If May is not coughing, she’s dancing; if the party conference slogan isn’t falling off the wall during her speech, it juxtaposes the promise “Security, Stability, Opportunity” in 2015 with just “Opportunity” this year. A near-empty conference hall addressed by ministers sits tellingly beside a bustling fringe where leadership contenders top the bill. With the rhetorical vacuity, scripted conviction and managed spontaneity laid bare, all that is left is a hollow shell where a political party might be.

Not so long ago parties stood for electoral power: anything less was irrelevant

Just over three years after Jeremy Corbyn won Labour’s leadership election, our understanding of the role a party can play in political life has been reimagined. Not so long ago, parties stood for electoral power. Anything less was irrelevant; anything more was unnecessary. It was a feat to be attained not through active engagement with members and voters, but to be directed by a professional class of politicians and their advisers, pollsters and marketers. If turnout plummeted, disaffection grew or confidence in the process dissipated, never mind. (Paradoxically, many of those in New Labour who clung most fiercely to this credo are also those most incandescent at one of its most obvious consequences: Brexit.) Politics, crudely reduced to electoralism, was not something people got involved in but something that was imposed on them.

“The age of party democracy has passed,” the late Irish political scientist Peter Mair declared in Ruling the Void, published posthumously in 2013, two years after he died. “Although the parties themselves remain, they have become so disconnected from the wider society and pursue a form of competition that is so lacking meaning that they no longer seem capable of sustaining democracy in its present form.”

Under Corbyn’s leadership, that began to change. Indeed, his very election to leader – which twice pitted members foursquare against the parliamentary party and twice saw members prevail – shows that he is not only an agent of that change but a product of it. Labour’s membership has virtually trebled in size, now standing at around 550,000. Anything that grows that fast and shifts its orientation that dramatically will have challenges. Many new members are passive; some prioritise a left agenda within the party; others see the party as a route to social activism in their communities; some joined because they want to get rid of Corbyn.

Corbyn’s political beliefs and abilities as leader have been debated endlessly by many on these pages, myself included. But the point here is not about him, but the nature of the party he now leads, and which now stands transformed. There are some, of course, who are either unwilling or unable to make that distinction. Branding those who support his leadership a “cult”, they insist this is merely evidence of blind personal devotion.

This was never true (though those who mistake Twitter for real life could be mistaken for thinking otherwise). During his first election in 2015, Corbyn won 44% of people who joined the party before 2010 and 49% of those who joined when Ed Miliband was leader – significantly more than any of his challengers and a clear sign of a far broader, deeper shift in the direction of the party.

In any case, if it is a cult, it’s not a very good one. Cults, by definition, are bodies of tight discipline and mass orthodoxy – that was New Labour. It in no way describes the party at present. At this year’s party conference there were profound disagreements among people who support Corbyn – over Brexit, a second referendum and party democracy.

Some constituency delegates booed and berated union leaders when proposals to democratise the party were watered down. Similarly there was heckling and cheering of speakers making arguments for and against a second referendum on Brexit, and whether there should be a remain option. One needn’t endorse the jeering to acknowledge that it emerged from what was clearly a spirited and engaged debate. People felt they had a stake.

The Conservative party could learn a lot from this.All the energy last week was outside the official conference. That says a great deal. It has fewer members than the Scottish National party, which stands only in Scotland. According to the Tory party’s own accounts last year it received twice as much in donations from the dead, in the form of legacy payments, as from the living. It lost half its membership between 2005 and 2013. And roughly half of those who remain would like to bring back the death penalty.

Electorally, the Tories still dominate. Most polls give them a slender lead, they are in government, and last year they won their highest vote share since 1983. However, even at the ballot box they are vulnerable. They have won an outright majority only once since 1992 – and they held that for just two years, during which they managed to call a referendum and lose it.

But politically, they barely function. Woefully out of touch with their base, their most recent upturn in membership came primarily from people joining because they opposed the Chequers agreement. Most joined not to participate in policymaking but in anticipation of a coup. Meanwhile, like the Ilford election pamphlet, the party is little more than a template, lacking policies, achievement or ideas.

The electoral and the political are, of course, connected. An invigorated base will not only stuff envelopes and knock on doors – it will argue for you at school gates, and in pubs and university refectories. When we have a hung parliament, in which 52 MPs have a majority of fewer than 1,000, and 11 were elected with margins of fewer than 100, that can make all the difference.

The point here is not that the nation would be better served by a more rightwing Tory party – it wouldn’t – but that our political culture would benefit from the Tory party engaging its base and hosting those debates, rather than suppressing them so that it can cling on to power – which at this point is its sole function. The government is being held to ransom by hardliners with no plausible policies, vision or strategy, who are able to thrive precisely because that vision goes untested and unchallenged. The problem is not only that the tail is wagging the dog, but that the dog has been neutered.

• Gary Younge is a Guardian columist