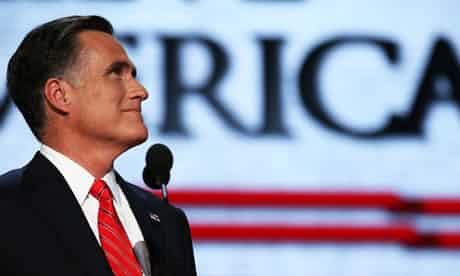 Like the Tin Man heading for the Emerald City, Mitt Romney came to Tampa looking for a heart. It's been a long journey involving a few trips to Damascus as he ditched his moderate record and then to hell and back through the primaries. Thursday night was the final leg. His last chance to introduce himself to an American public that feels it already knows and doesn't particularly like him as a regular multi-millionaire that anyone can relate to. But wizards can perform magic not miracles.

Romney didn't blow it. He spoke fluently. The speech was well written. He spoke with conviction. There were some good lines – one of the more scathing ran like this: "If you felt that excitement when you voted for Barack Obama, shouldn't you feel that way now that he's President Obama?

"You know there's something wrong with the kind of job he's done as president when the best feeling you had was the day you voted for him."

He coated his attacks on Obama with a veneer of civility that has been more evident at the convention than in Congress these past few years. Republican senate minority leader Mitch McConnell may have pledged that "the single most important thing we want to achieve is for President Obama to be a one-term president". But Romney insisted: "I wish President Obama had succeeded because I want America to succeed, but his promises gave way to disappointment and division."

Under the circumstances it was probably the best speech he could have given. And that's the problem. He's still Mitt Romney. He's solid and business-like; deliberate and plodding. He's standing as a CEO and he talks like a CEO. He's more comfortable in front of a PowerPoint than a crowd. There's no crime in that. But when the balloons have been released and the confetti scattered there is not a lot of political mileage in it either. The audience came to its feet out of duty not spontaneity. They would love him to win but they don't love him. They never have.

To call it an anti-climax would be to suggest there was a climax somewhere out there poised to visit the convention. There wasn't. And it was not for lack of effort.

God knows they tried to build the day around his vulnerabilities. They brought on a couple whom Mr Romney had counselled as their son died when he was a church pastor. "The true measure of a man is revealed in his actions during times of trouble – the quiet hospital room of a dying boy, with no camera and no reporters," said Ted Oparowsky before the world media. "This is the time to make that assessment."

They brought on Olympians to testify to his stewardship of the 2002 Winter Games in Salt Lake where he "drew a line in the sand and said the 2002 Games would have highest standard of ethics and integrity", said Mike Eruzione, captain of the 1980 "Miracle on Ice".

Earlier in the week Romney's vice-presidential pick, Paul Ryan, joked about his playlist – but neglected to tell us a single song that was on it – and his wife, Ann, told us he could make her laugh – but shared not a single example of how, when or why.

Not everything went according to plan. Clint Eastwood had a fictional conversation with an invisible president in an empty chair. Sandwiched between the bizarre (Eastwood) and the boring (Romney) the Florida senator, Marco Rubio, may have shone too brightly.

But the last day was the most impressive of three exceptionally dull and flat days. They finished on a high. The problem was they started so low they barely reached sea level by the end. They oiled their tin man as best they could. But at the end of the day – and it was a long day at the end of a long week – he's still a tin man.

• This article originally described Marco Rubio as the Florida governor. This has now been changed.