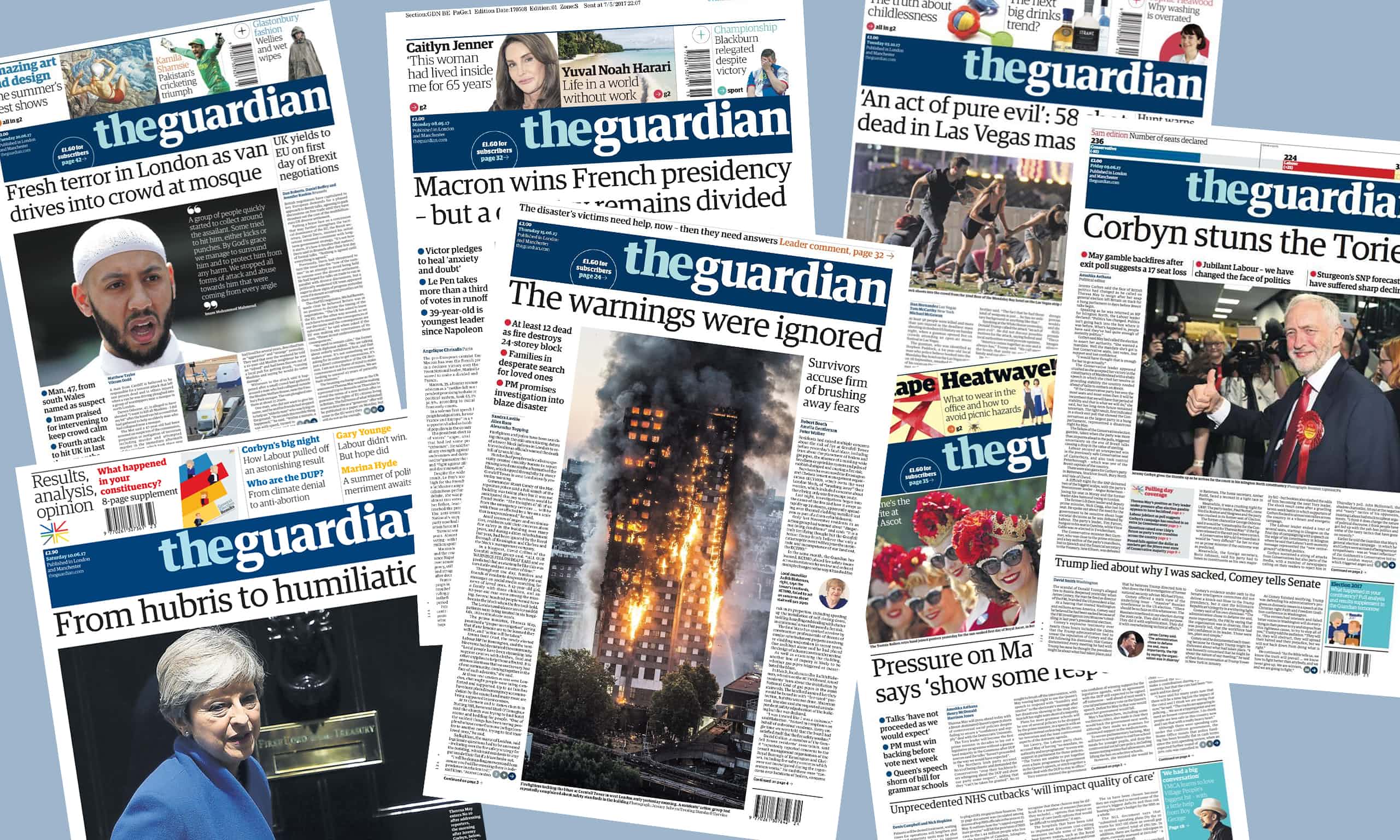 Tragedy, outrage and optimism: Gary Younge on editing the Bedside Guardian
The Guardian

They call it the Bedside Guardian for a reason. Every year we produce a collection, drawing together our best writing and the big stories of the past 12 months, just in time for Christmas. Its ideal perch is not on your bookshelf, but your nightstand table. Not because it will send you to sleep. But so you can dip in and out of it in the evening – flipping between your favourite writers and the coverage of some huge event; rereading at leisure the pieces you enjoyed in haste or enjoying the articles you missed first time around in sections you maybe never read. Cherry-picking from the cherries that have already been picked.

As the journalist charged with editing the collection this year, this was a particularly onerous challenge. The 12 months in question do not span a calendar year, but from October to October. In other words, it’s a year that starts with Trump’s election and ends with the hard-right marching into the Bundestag. Add a series of terrorist atrocities, hurricanes, the Grenfell tragedy and the national sleepwalk into a catastrophic Brexit and you start to worry that it might end up keeping readers awake.

“And as a nation with an unrivalled military chose a misogynist leader who could not tell the moral difference between Nazis and their opponents, the ice caps melted, the pound plummeted and austerity ravaged the poor ... Night night. Sweet dreams.”

In the end, there were a few things that saved the collection from reading like a well-crafted, unrelenting tale of woe.

We also have a stable of writers who have made a special talent out of looking at grim and finding funny. John Crace coined the term “Maybot” (“Sometime between July, when she looked like the safest pair of hands amid a sea of idiots, and now, Theresa May’s brain appears to have been hacked,” he wrote in 2016). Marina Hyde gave Katie Hopkins all the respect she deserves (“Katie uses fewer active verbs than even Tony Blair or John Keats. Presumably it’s because she really doesn’t have anywhere to go philosophically”).

There is no escaping that the world would be a better place if events had turned out otherwise. But there was resistance. Trump’s election incited a radical response (“Although there are plenty of reasons to be angry, this was not a march of anger,” wrote Jessica Valenti on the Women’s March). And closer to home at least one of those responses bore fruit. A vibrant electoral campaign by Labour, under Jeremy Corbyn, challenged austerity, defied critics (including many in his own party and in this paper) and left the Tory government weaker, more divided and hopelessly fragile. (“Mr Corbyn is on to something resonant, something common and something good,” argued our editorial before the election.)

And there was outrage. “That tomb in the sky will be for ever Theresa May’s monument,” wrote Polly Toynbee of Grenfell. “The story of Pontypool is a story of riches squandered, of dynamism blocked, of an entire community slung on the slag heap,” wrote Aditya Chakrabortty. True these are not the kind of lines that will ease you into your slumber. But for those who like their insomnia underpinned with a sense of righteous indignation, we can at least make sure you do not go quietly into the night.

One relatively new feature in the Bedside Guardian is the use of the live blog. For those events that it is valuable to see unfold, and at times unravel, in real time, they provide an invaluable means of reliving the moment as it was being reported. So long as the book graces the bedside table I have but two final pieces of advice.

First, do not read the live blog of the US election before you go to sleep. To see the confidence of the evening evaporate from 1.24am (“And we’re almost at the tipping point already. Florida is looking very vulnerable for Trump”) to 4.11am (“The big picture right now is simple and clear: Hillary Clinton is in trouble”) has all the restorative joy of hearing the collected speeches of David Davis on a loop. You might as well pour yourself a double espresso and put on Game of Thrones for all the kip you’ll enjoy after getting through that.

On the other hand, if it’s shut eye you want, go to the UK election live blog, where you can watch all the emperors of punditry disrobed in all their glory. 9.53pm: “Piers Morgan is happy to tweet his prediction: ‘Conservatives to win by 90-100 seat majority.’”

10.01pm: “Exit poll suggests Britain is on course for a hung parliament.”

Witness the sense of optimism build through the night along with a sense of astonishment that there is a viable constituency out there for hope and decency. Have a dram. Close your eyes. Things might be bad. But tomorrow really could be better.

follow on twitter
RT @thebookseller: "This particular anthology is important to me because it focuses on people, places and issues that have in the past been…
RT @FaberBooks: Dispatches from the Diaspora is available to pre-order, with signed copies available to pre-order from @NewhamBookshop now:…
RT @FaberBooks: Dispatches from the Diaspora: From Nelson Mandela to Black Lives Matter. A powerful, career-spanning collection of @garyyo…
RT @DurrutiRising: Huge mobilisations against the cops in #Athens tonight after a 16 year old Roma boy was shot through the head yesterday.…
A couple months ago I conducted a fascinating public interview with RMT leader @MickLynch4AGS .about everything fro… https://t.co/1zKJwllJW2
RT @SRTRC_England: An exciting new role as head of #humanresources at #ShowRacismtheRedCard Please RT. #educatorsjobs @MichaelRosenYes @gar…
“We didn’t ask for Lady Hussey to resign. But, really, the monarchy must do better on race.” Wanting the monarchy t… https://t.co/Pmo9BYdWnf
RT @mikewhoatv: Riz Ahmed nails it…“where are you really from?” https://t.co/vbL0wJr9dW
RT @HertsSid: Lady Susan Hussey at Buckingham Palace be like https://t.co/hmTifZC32r
RT @ilfoglio_it: "Il razzismo c’è ovunque, l’antisemitismo pure, così come le persone mentalmente fragili o gli estremisti politici. Ma sol…
© Gary Younge. All Rights reserved, site built with tlc
Get tamiflu Symptoms to get promethazine codeine cough syrup Where to get zocor pills Buy sildenafil generic online How to get diflucan in the us Celebrex online india Best place to buy motegrity online Cheap lipitor Aldactone buy online uk Where can i buy cellcept over the counter usa