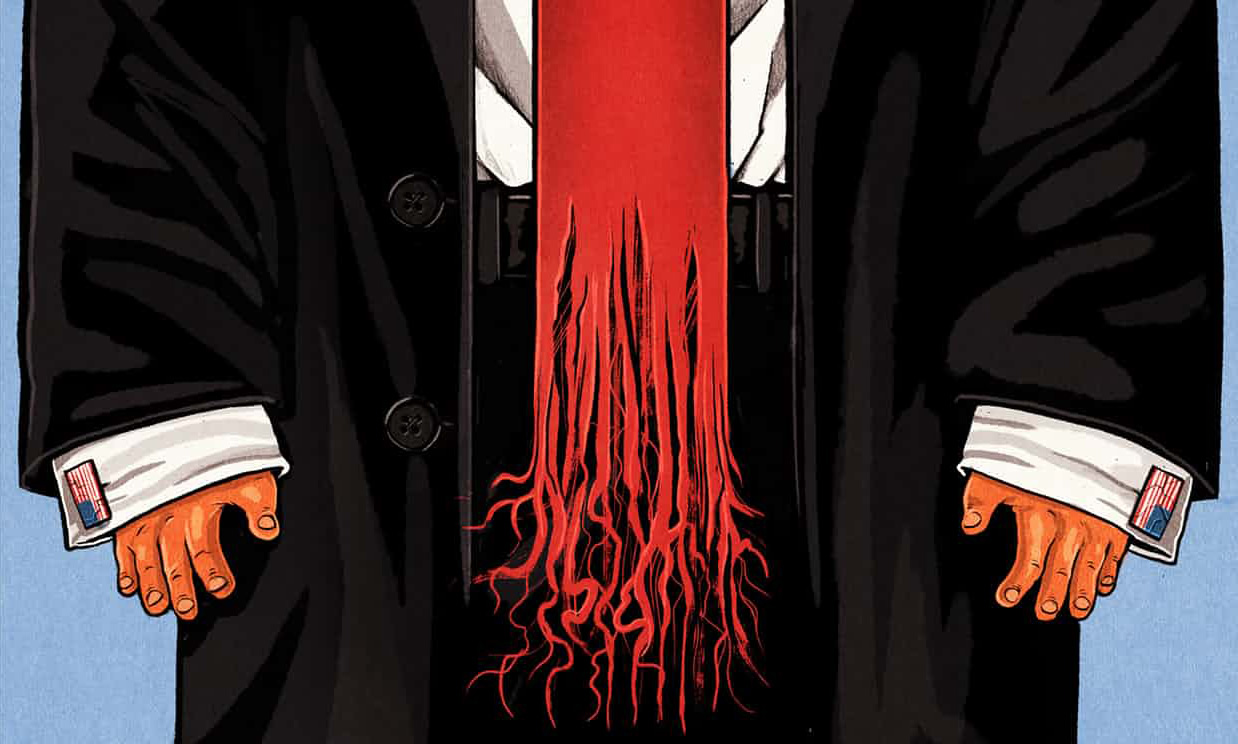 Trump’s presidency is unravelling. But he won’t fall without a push
The Guardian,
Photograph: Ben Jennings

Even by Donald Trump’s standards, Tuesday was extraordinary. First came the tweet that he had fired his secretary of state Rex Tillerson. Then a state department spokesman issued a statement claiming Tillerson was “unaware of the reason” for his dismissal, and had heard about it on Twitter. A few hours later the spokesman had been fired too. Meanwhile the lawyer of porn actor Stephanie Clifford (stage name: Stormy Daniels), who allegedly had an affair with Trump, warned the country to “buckle up” as Clifford sought to extract herself from her non-disclosure agreement so she could “publish any materials, such as text messages, photos and/or videos relating to the president that she may have in her possession”. Back in Washington, the Trump team announced it would be hiring John McEntee, Trump’s former personal assistant, as a senior adviser for campaign operations. The day before, McEntee had been escorted from the White House because he is under investigation by the Department of Homeland Security for serious financial crimes.

While all this was going on, voters in south-west Pennsylvania’s 18th district went to the polls in a byelection, in a district Republicans have held for the past 15 years. It was so safe that Democrats didn’t even bother contesting the last two elections. Trump trounced Hillary Clinton there by about 20 points. It should have been a shoo-in for the Republicans. By the end of the night Democrats were celebrating a wafer-thin victory, though this may yet be challenged.

Witnessing Trump’s presidency unravel so spectacularly provokes a perverse joy. The venality is so baroque, the vulgarity so ostentatious, the inconsistencies so stark, the incompetence so epic and the lies so brazen, it leaves you speechless. His vanity is without guile and the scandals that embroil him without end. Almost everything he says and does has been publicly contradicted, by himself, usually on Twitter. On Tuesday he said of Tillerson’s departure: “Rex and I have been talking about this a long time … We were not really thinking the same”.

On 1 December he tweeted: “The media has been speculating that I fired Rex Tillerson or that he would be leaving soon – FAKE NEWS! He’s not leaving and while we disagree on certain subjects, (I call the final shots) we work well together and America is highly respected again!” It’s amazing to think he ever imagined he could get away with it. And with each test at the ballot box it seems he can’t. Republicans have been crushed in elections around the country. Some defeats, like that of the alleged paedophile Roy Moore in Alabama, are unlikely to be repeated; others, like the gains across Virginia in November, indicate more sustained progress. There has been a relatively consistent swing of about 15 points to Democrats in state and congressional races that has seen them take over 40 seats from Republicans, including in states such as Florida and Wisconsin where Clinton lost in 2016. Midterm elections are almost never good for the party in the White House. On current trends, this November will be a disaster for Republicans.

And yet, even as voters reject him and he becomes increasingly isolated in his own fetid lair, the cloud that glowers over this moment remains far more imposing than any silver lining. There are two main reasons why progressives should refrain from revelry.

First of all, things are going to get worse before they get better. Tillerson, the former head of ExxonMobil, was a disastrous secretary of state. Ineffectual abroad, it soon became clear that he spoke with precious little authority. As he attempted to calm down tensions between Qatar and Saudi Arabia, Trump sided publicly with Saudi Arabia; when he tried to kick-start negotiations with North Korea, Trump tweeted that he was “wasting his time”. It seems the place where Tillerson had most impact was in his own department where, under his watch, morale has plummeted and there has been an exodus of talent and knowledge.

And yet it was, reportedly, Tillerson who helped keep the US in the Iran nuclear deal and the Paris climate accord. Extreme as the last year of US foreign policy has been, ostensibly Trump was being reined in. That restraint has gone. Tillerson’s replacement, CIA director Mike Pompeo, is an Islamophobic climate-change denier who opposes the deal with Iran and has made nods towards regime change in North Korea. “With Mike Pompeo, we have a similar thought process,” said Trump. That is not encouraging. Replacing Pompeo at the CIA is Gina Haspel, who oversaw a CIA torture site in Thailand where detainees were interrogated. The scandal used to be that there were advocates of torture in the West Wing. Now its practitioners are in office.

But the problem is not simply that things will get worse. It’s that it’s not at all obvious that, electorally at least, there’s a clear sense of what “better” would look like, beyond getting rid of Trump. Politically the country is clearly shifting leftwards. The nationwide walkouts of schoolchildren against gun violence on Wednesday, the women’s marches and teachers’ strikes, all suggest a swelling resistance to the Trump agenda. Pennsylvania is just the latest evidence that this has had an electoral impact.

But while the Democrats are happy to take the wins, they have not yet processed why they lost. They are beneficiaries of the frustration and anger. But there is little evidence that they are shifting with it, let alone cohering or leading it.

Conor Lamb’s victory in Pennsylvania was a progressive advance insofar as it was a setback for Trump. That’s great as far as it goes, but it doesn’t go nearly far enough. He was introduced at one rally as a “God-fearing, union-supporting, gun-owning, job-protecting, pension-defending, social-security-believing, healthcare-greeting, sending-drug-dealers-to-jail Democrat”. That, arguably, is what you have to be to get elected in south-west Pennsylvania. But nationally Democrats need a more hopeful message with a broader appeal.

They haven’t got one. On Wednesday the Senate passed a Republican bill that would provide the most comprehensive rollback in banking regulation since the financial crisis, with significant Democrat support. One would have assumed, in a period of growing inequality and stalling social mobility, that opposing it would be obvious if you wanted to win back those disenchanted rust-belt voters in Michigan and Wisconsin who stayed at home or backed Trump. Senate Democrats are instead divided, apparently confused over whether they should advocate for their base or the banks.

The problem with Democrats looking on Donald Trump’s presidency as a slow-motion car crash is that it concedes they are spectators at a moment when they should be in the driving seat – and that, when we come to survey the wreckage, there will be many innocent victims.