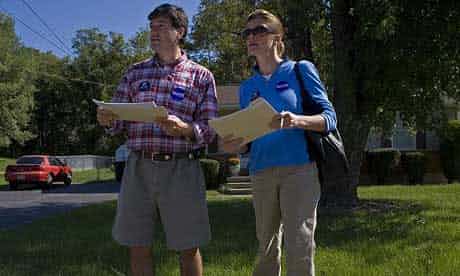 "Hell no!" said the man with the long beard from his half opened doorway.

Meghan Schertz's Obama badge had unleashed a torrent of invective.

"No Obama," he kept shouting, while Meghan struggled to finish a sentence. "I don't need to hear nothing from you Obama people."

"Do you see the fucking Nader sign," he bellowed, pointing to his yard sign which bared the name of the perennial independent candidate, Ralph Nader. "There's your answer."

"So you're an independent then," asked Meghan, as though engaged in rational conversation.

"Get you're ass off my property before I get my shot gun," said the tourretic Nader supporter. And so we left. As we circled back along the street the man sat at a table in his driveway.

Cheekily, I waved my hand at him. Menacingly, he waved his gun at me.

An afternoon out with an Obama canvasser is an education in the leg work, patience and resilience it takes for the Democratic presidential contender's strategy work.

It took about an hour and half to visit a designated number of houses in just a few streets in the Washington Heights area of Roanoke - a racially mixed middle-class part of town.

In a bid to identify Obama's base so they can make sure they maximise their turnout on polling day, she asks them who they are going to support, how strong their support is, whether they are sure to turn up on election day and if they would like some literature.

Or at least she tries to. One man took one look at Meghan and, before she could open her mouth, said: "I don't want to talk about it," and then went back inside.

Another woman refused to open the door but shouted from her window.

After many weekends' campaigning Schertz anticipates the response she's going to get as she walks up the driveway from the kind of cars people drive and other signifiers - a mixture of prejudice and defence mechanism.

But it doesn't always work. The home with two pick-up trucks bearing Harley Davidson stickers are leaning Obama. And who knew that a Nader sign would produce a gun-toting misanthrope.

But there are moments that have the smack of meaningful if minor achievement. With a day to go before the registration deadline Schertz also carries registration forms just in case. She gives some advice to a woman who is worried that her son's registration has his middle name wrong - the kind of discrepancy that could play havoc on election day.

In Virginia where if you don't vote for more than four years you fall off the voter rolls, some are not sure if they are registered or not.

And then there's the information that goes back to town office about where the base is, that will be punched into the computer providing the raw data on which the campaign's logistical efforts hinge. It all happens on such a small scale that you couldn't do it unless you thought you were part of something bigger.

Schertz, whose run-in with the Nader voter ultimately only provided more raw material for her good humour, has never been involved in an election campaign before.

In the primaries she supported Hillary Clinton. "There's too much at stake to sit this one out," she says.

A look at the big picture suggests that these small efforts are paying off for Obama. Numbers released by the Virginia state board of elections for September show that the increase in the number of registered voters in Roanoke city, which is Democratic and one quarter black, is more than double that of Roanoke county, which is Republican and 5% black over the past year.

Over the past month the city has seen more than three times the increase of registered voters as the county. This reflects a trend that is both statewide and nationwide news with traditionally Democratic areas far exceeding Republican areas and, where you can register by party, Democrats massively outpacing Republicans.

With voter registration drawing to a close all over the country this marks the end of the beginning for Obama's ground game.

His task was to not just to win over the electorate but to expand it and therefore change the calculus. So far so good.

Now comes the hard work. Keeping them energised and making sure that they show up. The Obama campaign predict that 80% of the new registered voters in Virginia are Democrats and that three quarters of them will show up on election day.

Which brings us to the final challenge. Making sure that the votes are counted.

follow on twitter
@carysafoko @DavidHarewood @britishlibrary Spite. It’s my superpower
Very much looking forward to being in conversation with @DavidHarewood at the @britishlibrary in London on October… https://t.co/ccIdLj0jU8
RT @typemediacenter: For @BritishVogue's September 2021 issue, Type Fellow @garyyounge spoke with the Barbados Prime Minister @miaamormottl…
RT @immacReno: "You can be as brilliant, rich and accomplished and you will be quite often defined by just that one mistake if you're blac…
RT @meghanetinsley: New blog post on @RaceEDS: Our take on the removal of the last Confederate statue on Monument Avenue. @EthnicityUK @gar…
RT @DrFrancesRyan: Solidarity with Andrew Neil. We all go into journalism hoping to tackle the metropolitan elite but before you know it, y…
@elotroalex @dbatchak Thanks so much. I found it and really appreciate your help.
RT @BlackYouthProj: The Race & Populism working group is hosting a public dialogue about the role of people of color in building a new mult…
@jakeqmarshall Honoured @jakeqmarshall . Hopefully see you on Monday at this lecture on Black Lives Matter -… https://t.co/GmCvOPK3if
“Black Lives Matter: movement, moment, symbol, substance?” https://t.co/3vR1p9mEFZ
© Gary Younge. All Rights reserved, site built with tlc
Buy sildenafil generic online Tadalafil online us Buy valtrex online with free samples Antabuse buy Where can you buy cialis