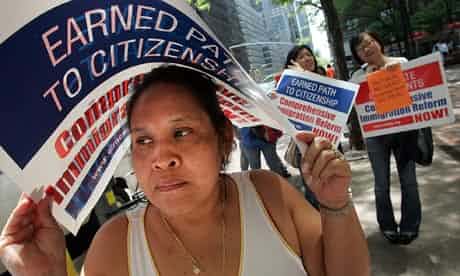 US immigration laws bow to the bigots and the opportunists
The Guardian,
Photograph: Mario Tama/Getty Images

While travelling along the US-Mexican border, from Brownsville to San Diego, I met a man in New Mexico who went by the name of Quasimodo who claimed he "could tell an 'illegal' by looking at them". I found this doubtful, and so asked Quasimodo, one of the Minutemen, an anti-immigrant vigilante group how. "It's like wild dog versus tame dog. They just don't have the same kind of look."

Preposterous as Quasimodo's claim may sound, this crude and offensive rule of thumb has, in many states, become the rule of law. Legislation in Alabama, Arizona and elsewhere gives police the right to check the immigration status of those they 'suspect' of being undocumented.

This has effectively given bigots with badges a licence to go hunting with impunity for "wild dogs". Earlier this week a Justice Department investigation into Maricopa County, Arizona (which includes Phoenix) found the sheriff's department conducting raids against illegal immigrants because "dark-skinned" people speaking Spanish were reported congregating in an area.

The 22-page report came just a few days after the supreme court agreed to hear challenges to the constitutionality of Arizona's law. The decision will have widespread ramifications for a range of anti-immigrant statutes across the country. Given the political complexion of the court there's no saying how they will rule. Either way, the reality of how these laws are applied and experienced are clear.

The US has no problem with wealthy outsiders. A rare example of bipartisan legislation recently was the Visit USA Act, by Democrat Charles Schumer and Republican Mike Lee, which sought to fast-track visas for foreigners spending $500,000 on property. It would allow them and their families to live in America for as long as they owned their homes, but not to work or claim federal benefits. It's unlikely to become law; but it's also unlikely to be controversial either.

This hypocrisy was highlighted last month when it caught the wrong kind of immigrant, Detlev Hagar, a German Mercedes executive, was arrested after he was arrested because his rental car had no licence plates and could produce only his German ID card. Previously he would have been given a ticket and a court date.

This was generally understood to be an unintended consequence of the law. Put bluntly, it was not supposed to ensnare Hagar; it was one of his low-paid employees they were after.

Secondly, while the real target might be poor people in general, they are aimed at Latinos in particular.

The Justice Department's three-year investigation into Maricopa County found the sheriff's department had "a pervasive culture of discriminatory bias against Latinos" that "reaches the highest levels of the agency." The very highest level in Maricopa is sheriff Joe Arpaio, the Bull Connor of West and aspiring Republican kingmaker.

A report by the New York Times earlier this week illustrates how this all plays out in real life. It detailed a number of American citizens, all of whom were Hispanic, who found themselves in the crosshairs of the Department of Homeland Security because they 'looked' illegal and were not given the opportunity to prove their citizenship.

"I told every officer I was in front of that I'm an American citizen, and they didn't believe me," Antonio Montejano told the Times. Montejano, who was born in Los Angeles, was arrested on a shoplifting charge last month and spent two nights in a police station in Santa Monica and another two in an LA county jail cell, until his citizenship status was clarified.

In her testimony before Birmingham City Council, the Southern Poverty Law Center's Mary Bauer gave several examples of racial profiling in which Latinos had been identified, on the basis of their ethnicity, as likely to be undocumented. To mention but a couple: in Northport, Alabama, Latino customers were told that their water services would be shut off if they didn't provide proof of immigration status; a documented Latino from Ohio was told his bank card would not be accepted because he didn't have identification issued by Alabama. The Monday after the law was implemented the absentee rate for Latino children doubled as families fled. A Human Rights Watch report released this week revealed that one minister lost 75% of his congregation.

This is intentional. I once suggested to a minuteman running for office that there was no way the US could deport all the undocumented immigrants. "We don't need to deport them," he explained. "All we have to do is enforce our employment laws and pretty soon they won't be able to get a job and will self-deport." So the border ceases to be a just a physical entity and is reproduced in all aspects of American life.

The paradox is that the experience of these laws shows that while America's conservative politics are dependent on nativist rhetoric its standard of living is dependent on exploiting cheap, foreign labour, much of which is undocumented.

In Georgia, which passed a bill similar to Arizona's, more than 80% of respondents, by acreage, to a Fruit and Vegetable Growers Association survey, reported around 40% labour shortages, prompting substantial financial losses. In Alabama farmers are reporting tomatoes "rotting on the vine".

Worse still, their aim of creating a hostile environment stands in direct contradiction to their bid to ensure a safe climate for international capital. Not long after the Mercedes incident a Japanese manager was also arrested in Alabama, even though he had his Japanese driving licence and passport with him. The St Louis Dispatch responded with a bid to get foreign companies to come to Missouri. "Our state has many advantages over Alabama," argued an editorial in the St Louis Dispatch. "We are the Show-Me State, not the 'Show me your papers' state."

"Alabama has worked so hard to reinvent itself as a destination for global manufacturing. It's really been a remarkable transformation," Mark Sweeney, who helps companies find locations for capital investment, told Mobile's Press Register. "Unfortunately, this law really is counter to that effort."

Xenophobia on this level comes at a price: either documented citizens work for less or they pay more for their goods. It's not obvious that they are prepared to do either.

"Just as the Carthaginians hired mercenaries to do their fighting for them, we Americans bring in mercenaries to do our hard and humble work," wrote John Steinbeck in Travels With Charley in 1968. "I hope we may not be overwhelmed one day by peoples not too proud or too lazy or too soft to bend to the earth and pick up the things we eat."

Fifty years on these 'merceaneries' are neither too proud, too soft nor too lazy. But thanks to bigotry and opportunism, many are now too scared.

follow on twitter
RT @MCRSociology: Gary Younge discusses identity politics and America with Will Hutton in this episode of @thewesocietypod https://t.co/72…
RT @mart_welton: Congratulations to all those getting their A-level results today. If you have BBB at A-level or above you can still apply…
RT @BernardineEvari: Please follow the groundbreaking online #MuseumofColour UK, founded by the unstoppable Samenua Sesher. The 1st gallery…
RT @EthnicityUK: Gary Younge is interviewed by @sonikkalogan about his work on racism and gun violence in @the_hindu #DataPoint podcast. h…
RT @thefreedomi: 🚨 NEW: Saudi women’s rights activist & academic Salma al-Shehab was sentenced to 34 years in prison + 34 year travel ban f…
RT @LRB: #DawnFosterForever! On Thursday 15 September at the @LRBbookshop, @BizK1, @piercepenniless, Lynsey Hanley and @garyyounge will d…
RT @ShowunmiV: This is how we support Black women and girls https://t.co/8YmgV21zHo
RT @sonikkalogan: It's #DataPoint Pod Thursday! In this week's episode, I talk to @noraneus, @garyyounge and @Casey_J_Wooten about the U.S.…
RT @bgnoiseuk: Next month, @LRBbookshop will host an event to celebrate the life and work of Dawn Foster with @BizK1, @piercepenniless, Lyn…
Help me Twitter. The quote: ""You can cut all the flowers but you cannot keep Spring from coming." is most commonly… https://t.co/Xs7JkiOEd5
© Gary Younge. All Rights reserved, site built with tlc
How much does vaniqa cost per pill How to order cefzil online Where to buy cheap glucotrol How much does cardura cost Get propranolol Renova price comparison Where is better to buy floxin Online doctor paxil cr Meloxicam 15 mg cost without insurance Buy antabuse canada