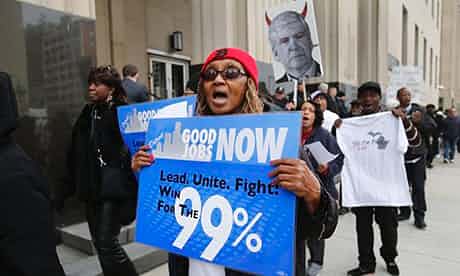 US Republicans make the poor pay to balance the budget
The Guardian,
Photograph: Rebecca Cook/Reuters

During a discussion at the University of Michigan in 2010, the billionaire vice-chairman of Warren Buffett's Berkshire Hathaway firm, Charles Munger, was asked whether the government should have bailed out homeowners rather than banks. "You've got it exactly wrong," he said. "There's danger in just shovelling out money to people who say, 'My life is a little harder than it used to be.' At a certain place you've got to say to the people, 'Suck it in and cope, buddy. Suck it in and cope.'"

But banks, he insisted, need our help. It turns out that moral hazard – the notion that those who know the costs of their failure will be borne by others will become increasingly reckless – only really applies to the working poor.

"You should thank God" for bank bailouts, Munger told his audience. "Now, if you talk about bailouts for everybody else, there comes a place where if you just start bailing out all the individuals instead of telling them to adapt, the culture dies."

In the five years since the financial crisis took hold, people have been sucking it in by the lungful and discovering how pitiful a coping strategy that is. In Michigan, the state where Munger spoke, black male life expectancy is lower than male life expectancy in Uzbekistan; in Detroit, the closest big city, black infant mortality is on a par with Syria (before the war).

As such, the crisis accelerated an already heinous trend of growing inequalities. Over a period of 18 years, America's white working class – particularly women – have started dying younger. "Absent a war, genocide, pandemic, or massive governmental collapse, drops in life expectancy are rare," wrote Monica Potts in the American Prospect last month. But this was a war on the poor. "Lack of access to education, medical care, good wages and healthy food isn't just leaving the worst-off Americans behind. It's killing them."

This particular crisis, however, has also accentuated the contradictions between the claims long made for neoliberalism and the system's ability to deliver on them. The "culture" of capitalism, to which Munger referred, did not die but thrived precisely because it was not forced to adapt, while working people – who kept it afloat through their taxes and now through cuts in public spending – struggle to survive. Given the broad framing of economic struggles in the west exacerbated by the crisis, this reality is neither new nor specific to the US. "Over the past 30 years the workers' take from the pie has shrunk across the globe," explains an editorial in the latest Economist. "The scale and breadth of this squeeze are striking … When growth is sluggish … workers are getting a smaller morsel of a smaller slice of a slow-growing pie."

A few days before the bailout was passed, I quoted Lenin in these pages. He once argued: "The capitalists can always buy themselves out of any crises, as long as they make the workers pay." What has been striking, particularly recently, has been the brazen and callous nature in which these payments have been extorted.

Last Friday, 47 million Americans had their food stamp benefits cut. These provide assistance to those who lack sufficient money to feed themselves and their families. Individuals lose $11 (£7) a month while a family of four will lose $36. That will save the public purse precious little – bombing Syria would have been far more costly – but will mean a great deal to those affected. "Before the cut, it was kind of an assumption you were going to the food bank anyway," Lance Worth, of Washington state, told the Bellingham Herald. "I guess I'm just going to go $20 hungrier – aren't I?"

The cut marks the lapse in stimulus package ushered in four years ago. But while the recession is officially over, the poverty it engendered remains. Government figures show one in seven Americans is food insecure. According to Gallup, in August, one in five said they have, at times during the last year, lacked money to buy food that they or their families needed. Both figures are roughly the same as when Obama was elected. This negligence will now be compounded by mendacity. Republicans propose further swingeing cuts to the food-stamp programme; Democrats suggest smaller cuts. The question is not whether the vulnerable will be hammered, but by how much.

The impetus behind these cuts are not fiscal but ideological. Republicans, in particular, claim the poor have it too easy. "We don't want to turn the safety net into a hammock that lulls able-bodied people into lives of dependency and complacency," claimed former Republican vice-presidential candidate Paul Ryan. "That drains them of their will and their incentive to make the most of their lives."

The notion that food "drains the will" while hunger motivates the ambitious would have more currency – not much, but more – if the right wasn't simultaneously doing its utmost to drive down wages to a level where work provides no guarantee against hunger. In last week's paper for the Economic Policy Institute, Gordon Lafer, an associate professor at the University of Oregon, revealed the degree to which conservatives have been driving down wages, benefits and protections at a local level after their victory at the 2010 midterms.

He writes: "Four states passed laws restricting the minimum wage, four lifted restrictions on child labour, and 16 imposed new limits on benefits for the unemployed. With the support of the corporate lobbies, states also passed laws stripping workers of overtime rights, repealing or restricting rights to sick leave, and making it harder to sue one's employer for race or sex discrimination."

That's why 40% of households on food stamps have at least one person working. And the states most aggressive in pursuing these policies, Lafer points out, had some of the smallest budget deficits in the country.

Immediately after Obama's election in 2008, his chief of staff to be, Rahm Emanuel, said: "You never let a serious crisis go to waste. And what I mean by that is it's an opportunity to do things you think you could not do before." The crisis didn't go to waste. But it is the right that has seized the opportunity. Not content with balancing the budget on the bellies of the hungry, it is also fattening the coffers of the wealthy on the backs of the poor.

follow on twitter
RT @TalawaTheatreCo: Hey! We're looking for new young trustees aged between 18 and 25. Join us, and help shape the future of Talawa. All d…
RT @RSLiterature: To kick-off our #LiteratureMatters #RSL200 Autumn/Winter events, join @DavidHarewood & @GaryYounge live @britishlibrary t…
RT @gavinesler: The prime minister of the United Kingdom in his own words ….
RT @EuceEsc: We are so excited to announce that during Pitt's #InternationalWeek2021, Gary Younge will be (virtually) delivering the 2021-2…
There are so many wonderful things about this photograph. https://t.co/w46AJycfA1
@DavidHarewood @britishlibrary Can I have your pies?
RT @DavidHarewood: @DavidHarewood /@garyyounge It’s ON! See the heavyweight battle everyone’s talking about! @britishlibrary for ONE night…
@carysafoko @DavidHarewood @britishlibrary Spite. It’s my superpower
Very much looking forward to being in conversation with @DavidHarewood at the @britishlibrary in London on October… https://t.co/ccIdLj0jU8
RT @typemediacenter: For @BritishVogue's September 2021 issue, Type Fellow @garyyounge spoke with the Barbados Prime Minister @miaamormottl…
© Gary Younge. All Rights reserved, site built with tlc
Antabuse buy Buy valtrex online with free samples Buy sildenafil generic online Buy discount vardenafil Tadalafil online us How to get a cipro prescription from your doctor Where can you buy cialis