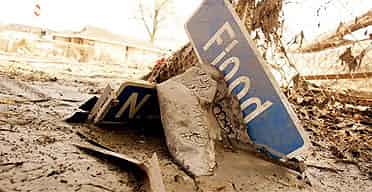 We'll return for your sister's body, the rescuers said. Two months on she was still in the house
The Guardian,
Photograph: Brian Snyder/ Reuters

Nobody knows how long Deborah "Bodie" Fisher, 85, had been trapped in her home with the corpse of her younger sister, Delia "Sis" Holloway, 82, upstairs, and 2ft of flood water downstairs when help finally floated by on September 2.

It was five days after New Orleans's levees had broken. Bodie waded downstairs to tell the rescuers to leave her alone. "My sister is upstairs," she told them. "Let me die here with my sister." Then she slammed the door and went back in.

The rescuers overruled her. They broke in through an upstairs window, went past Sis's body and let Bodie pack a bag before they took her to the makeshift hospital at New Orleans airport. They said they would come back for her sister.

Two months later two family friends, John Gaines and Stacey Martin, went to the house. Ms Martin used to clean for the women and Mr Gaines thought taking her to the house would give her some closure.

Two months after she was first seen, Sis's body lay decomposing in a townhouse in the business district. Mr Gaines says she died with one of her feet on the floor, as though she was trying to get out of bed. The foot had rotted from the leg. Someone had covered her body with clothes. But when Ms Martin tried to remove the clothes, Sis's face started to come off with it. Just as downstairs bears the flood's watermark, so the headboard shows the stain her hair made as it splayed out above her head. "She had no face," Mr Gaines says. "The skin had shrunk right up to the bones on the body and was jet black. All the fluids had run out of her."

This is the gruesome sequel to the story that started on these pages two months ago. Bodie is my wife's godmother. She had decided, along with her sister, to stay put as Hurricane Katrina came barrelling over the Gulf. The house had been in the family for at least a century and had withstood all other hurricanes.

Mr Gaines kept offering to take them out with him, but they stayed put. "Bodie was the commander in chief and she wasn't moving," Mr Gaines says.

"They thought they would be OK," says Sis's daughter, Deborah Holloway. "I wasn't happy with their decision but I knew that's how they wanted it to be."

Indeed, the wind caused little damage to the house. But when the levees broke, the bottom floor filled up. Someone managed to get through to the women on the Tuesday, and they were fine. Nobody knows quite what happened between that conversation and the time when the rescuers arrived three days later. One of them wrote "Help" in red lipstick back to front on a window, and hung a red scarf as a sign of distress. All around the house there are bottles of water, some half finished; upstairs in the back room is half a loaf of bread.

What followed was a tragic tale of callous incompetence compounded by institutional indifference, and individual kindness negated by systemic failure.

Bodie was flown in an air force plane from New Orleans to San Antonio. Somewhere along the way, says Ms Holloway, she had her bag stolen. When the family tracked her down in San Antonio, they went to see her. Ms Holloway says: "She was coherent, talkative, angry and very upset about her sister." Her aunt looked frail and had lost a lot of weight.

Ms Holloway went to get Bodie some new clothes and her favourite Jamocha almond fudge ice cream. Shortly after she came back, she died.

"She died in San Antonio but she died because of Katrina," Ms Holloway says. "I hope she's counted as one of the dead."

Two days later, on September 8, someone wrote in black marker pen, "1 elderly DOA [Dead on arrival]. 2nd floor bedroom. No hazards," on the front wall of the New Orleans house. On September 10, Ms Holloway was called in California and asked for a DNA sample so that her mother's body could be identified. She was told that a sample of Sis's DNA had been taken, put it in a pouch with her identification and it would be matched with her daughter's before the body was released.

On September 13 Steven Pacheco, an official of the Society for the Protection of Cruelty to Animals (nobody knows how that organisation got involved), went to the house and called to inform Ms Holloway that her mother was dead and that her mother had written a letter to her daughter that was in her purse.

Ms Holloway asked him if he would mind going back and getting the letter and some other keepsakes. Mr Pacheco did. "There were so many good people all along the way," Mrs Holloway says. "But so much incompetence." That day someone wrote "DOA upstairs" and the date on the same front wall of the house in red spraypaint.

On September 17, Ms Holloway held a double memorial service for her mother and her aunt, presuming that her mother's body was in St Gabriel's morgue and would soon be released. She kept calling but nobody could help her locate the body. One volunteer said they did not know which body was in which bodybag.

More than two weeks later, Mr Gaines arrived to find Sis's body still in the house. He called the emergency services and they finally came to take her away. This time they marked the house in yellow spray paint, right over the red.

Three days after the body was removed, the firefighters came. They were gathering information about people who had not been found by their loved ones and wanted to know what had happened to Sis.

As of Friday, her body was at St Gabriel's, still a prisoner of the appalling bureaucracy. "They say they will not release her until they have positive identification," Ms Holloway says. "And I can't tell you how long that's going to take. My mother deserved better than this. Whatever happened to dignity? Who was responsible? She can't be the only one."