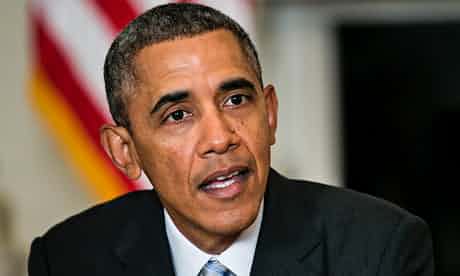 What the hell is Barack Obama's presidency for?
The Guardian,
Photograph: TJ Kirkpatrick/Corbis

A few days after John F Kennedy's assassination, Lyndon Johnson sat in his kitchen with his key advisers working his first speech to Congress. It was the evening of Kennedy's funeral – Johnson was now president. The nation was still in grief and Johnson, writes Robert Caro in The Years of Lyndon Johnson: The Passage of Power, was not yet able to move into the White House because Kennedy's effects were still there.

He had been a hapless vice-president; now he had to both personify and project the transition from bereavement to business as usual. In the midst of the cold war, with Vietnam brewing, the Kennedy administration had been trying to get civil rights legislation and tax cuts through Congress. There was plenty of business to attend to. Johnson's advisers were keen that he introduced himself to the nation as a president who could get things done.

For that reason, writes Caro, they implored him not to push for civil rights in this first speech, since it had no chance of passing. "The presidency has only a certain amount of coinage to expend, and you oughtn't to expend it on this," said "one of the wise, practical people around the table". Johnson, who sat in silence at the table as his aides debated, interjected: "Well, what the hell's the presidency for."

"First," he told Congress a few days later, "no memorial oration or eulogy could more eloquently honour President Kennedy's memory than the earliest possible passage of the civil rights bill for which he fought so long." Over the next five years he would go on to sign the Civil Rights Act, the Voting Rights Act, launch the war on poverty and introduce Medicaid (medical assistance for low-income families) and Medicare (for seniors). That's what his presidency was for.

Barack Obama has now been in power for longer than Johnson was, and the question remains: "What the hell's his presidency for?" His second term has been characterised by a profound sense of drift in principle and policy. While posing as the ally of the immigrant he is deporting people at a faster clip than any of his predecessors; while claiming to be a supporter of labour he's championing trade deals that will undercut American jobs and wages. In December, even as he pursued one whistleblower, Edward Snowden and kept another, Chelsea Manning, incarcerated, he told the crowd at Nelson Mandela's funeral: "There are too many leaders who claim solidarity with Madiba's struggle for freedom, but do not tolerate dissent from their own people."

If there was a plot, he's lost it. If there was a point, few can remember it. If he had a big idea, he shrank it. If there's a moral compass powerful enough to guide such contradictions to more consistent waters, it is in urgent need of being reset.

Given the barriers to democratic engagement and progressive change in America – gerrymandering, big money and Senate vetoes – we should always be wary of expecting too much from a system designed to deliver precious little to the poor. We should also challenge the illusion that any individual can single-handedly produce progressive change in the absence of a mass movement that can both drive and sustain it.

Nonetheless, it was Obama who set himself the task of becoming a transformational political figure in the mould of Ronald Reagan or JFK. "I think we are in one of those fundamentally different times right now where people think that things, the way they are going, just aren't working," he said. It was he who donned the mantles of "hope" and "change".

It was obvious what his election was for. First, preventing the alternative: presidential candidates in the grip of a deeply dysfunctional and reactionary party. His arrival marked a respite from eight years of international isolation, military excess and economic collapse. He stood against fear, exclusion and greed – and won. Second, it helped cohere and mobilise a new progressive coalition that is transforming the electoral landscape. Finally, it proved that despite the country's recent history Americans could elect a black man to its highest office.

So his ascent to power had meaning. It's his presence in power that lacks purpose. The gap between rich and poor and black and white has grown while he's been in the White House, the prospects for immigration reform remain remote, bankers made away with the loot, and Guantánamo's still open. It's true there's a limit to what a president can do about much of this and that Republican intransigence has not helped. But that makes the original question more salient not less: if he can't reunite a divided political culture, which was one of his key pledges, and his powers are that limited, then what is the point of his presidency?

This should not deny his achievements. He scaled down one major war, is winding down another, and helped save the US car industry. If he's on the hook for growing inequality, then he can take credit for the deficit shrinking and unemployment falling. But together, this amounts to an extended period of triage before sending the patient back out into the world without any plan for long-term recovery. The underlying impulses, policies, priorities and structures that made the wars and economic collapse possible are still in place.

Finally, there's healthcare reform. The brouhaha over its botched rollout will scarcely be remembered a few years hence. But with roughly 31 million people set to remain uninsured and little changing for many, its undeniable benefits are not likely to be remembered as transformational. All in all, there's precious little that Obama has done that any of his primary opponents would not have done.

Occasionally, he either gives a lead – like after the shootings at Newtown when he advocated for gun control – or follows one, as in his support for gay marriage or preventing the deportation of young undocumented immigrants, which helps to set a tone or establish a moral marker. But these interventions are too rare, and their remedies too piecemeal, to constitute a narrative.