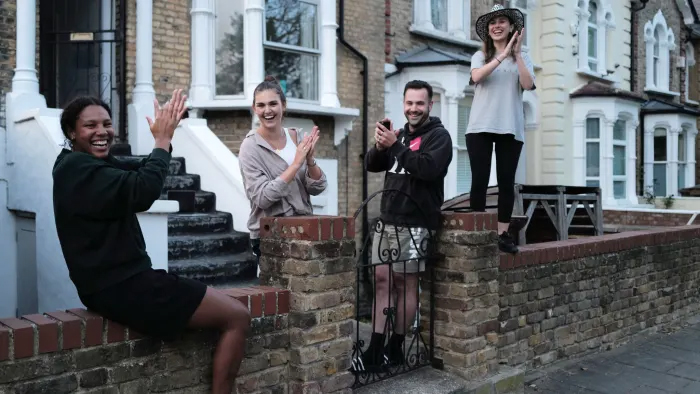 What, precisely, are we making noise for?
FT

Today’s social movements, from #ClapForCarers to #MeToo, are often a meme in pursuit of a meaning

Every Thursday night at home in London, around 7.55pm, it’s the same. I tell myself not to overthink it. I go to the kitchen cupboard, pull out a saucepan and a wooden spoon, take them to the front door. Then I wait until the clock strikes eight, step out and start whacking the pan. My wife claps beside me. Occasionally the kids join in.

The street comes out; people I haven’t seen since last week. My daughter’s piano teacher across the road; the downstairs neighbour. We wave, chat, clap and cheer for the workers in the National Health Service who are fighting Covid-19 on our behalf. Then we go back inside. And I ask myself: “What, precisely, was that about?”

Many countries have developed rituals for celebrating their medical workers during this pandemic. But very few of them have nationalised health services. As a nation, the UK is more proud of the NHS than the monarchy.

So when people come out en masse and cheer for the NHS — the one issue that vied with Brexit as a priority during last December’s general election — it is, by definition, a political act. Quite what those politics amount to is, of course, deeply contested. The experts keep saying the UK is just a few weeks behind Italy, where there have been significant protests over the effects of the lockdown for a month now. If British politics are keeping stride with our pandemic then a backlash is overdue.

I am clapping for the NHS and the people who work in it, as my mother did; for the disproportionately black and brown migrant and low-paid labourers who keep the institution going, have done so since its inception and are now disproportionately vulnerable to both the disease and lockdown’s challenges. I’m clapping with pride that I live in a nation that has created and sustained this, but also with rage that they still do not all have the protective equipment or testing they need, and with hope that one day soon they’ll get the pay they deserve and the service the investment it needs. When I see the prime minister, Boris Johnson, or Prince Charles out on the doorstep I think: “Well clearly we’re not all clapping for the same thing.” You can evoke national unity but you cannot enforce it.

As public trust in the government’s ability to handle the pandemic plummets and the death toll, particularly of health workers, rises, the Thursday outing feels less like just a consensual display of gratitude than the closest thing you can get to a national demonstration with social distancing.

It feels like an exemplar of the modern social movement par excellence: an inadequate, if popular, gesture that highlights an issue it is not equipped to solve. Born as a callout on the internet, it owes its spread to social media. It has no leader, centre or organisational structure. It emerged from a sentiment that was broadly felt but essentially latent — a colourless gas in search of a spark, a meme in pursuit of meaning.

Like #BlackLivesMatter or #MeToo, it may well find that meaning in one moment, only to find its biggest audience in another. The #BlackLivesMatter hashtag was coined in 2013 following the acquittal of George Zimmerman for killing an unarmed black teenager, Trayvon Martin, in Orlando, Florida. But it became globally popular a year later, after the fatal police shooting of Michael Brown, 1,000 miles away in Ferguson, Missouri.

The MeToo movement was the 2006 MySpace invention of a Bronx-based community organiser seeking to advance “empowerment through empathy” among women of colour who had been sexually abused. It was not until the revelations of Hollywood producer Harvey Weinstein’s serial sexual abuse and rape, more than a decade later, that it became global phenomenon.

What they lack in form and structure — these movements have no meetings or minutes — they partly compensate for in scale and flexibility. They can respond quickly; but they can fade fast too. Whatever we would like to believe, clicking, sending, retweeting and liking is not the modern day equivalent of marching, picketing or sitting-in. Activism demands, at the very least, activity.

Still, people can be rallied on an unprecedented scale and with a new speed. Absent a definite target, these movements raise consciousness but not demands. That makes it difficult to gauge what success would look like even as they have impact. No one can claim a causal connection between #MeToo and the historic number of women that were elected to the US Congress a year later. But the contextual relationship between the two is hard to dismiss.

Similarly, Occupy Wall Street did not lead to reforms of the financial industry; but Barack Obama’s communications director has said that it had a significant effect on the former US president’s re-election prospects because it “gave people permission to openly discuss something that had not really been openly discussed which was the growing inequalities and the unfairness”.

So, come Thursday, I will once again try not to overthink it. I will step out and make some noise with the vague hope that, somewhere along the line, it might help make change of some kind.