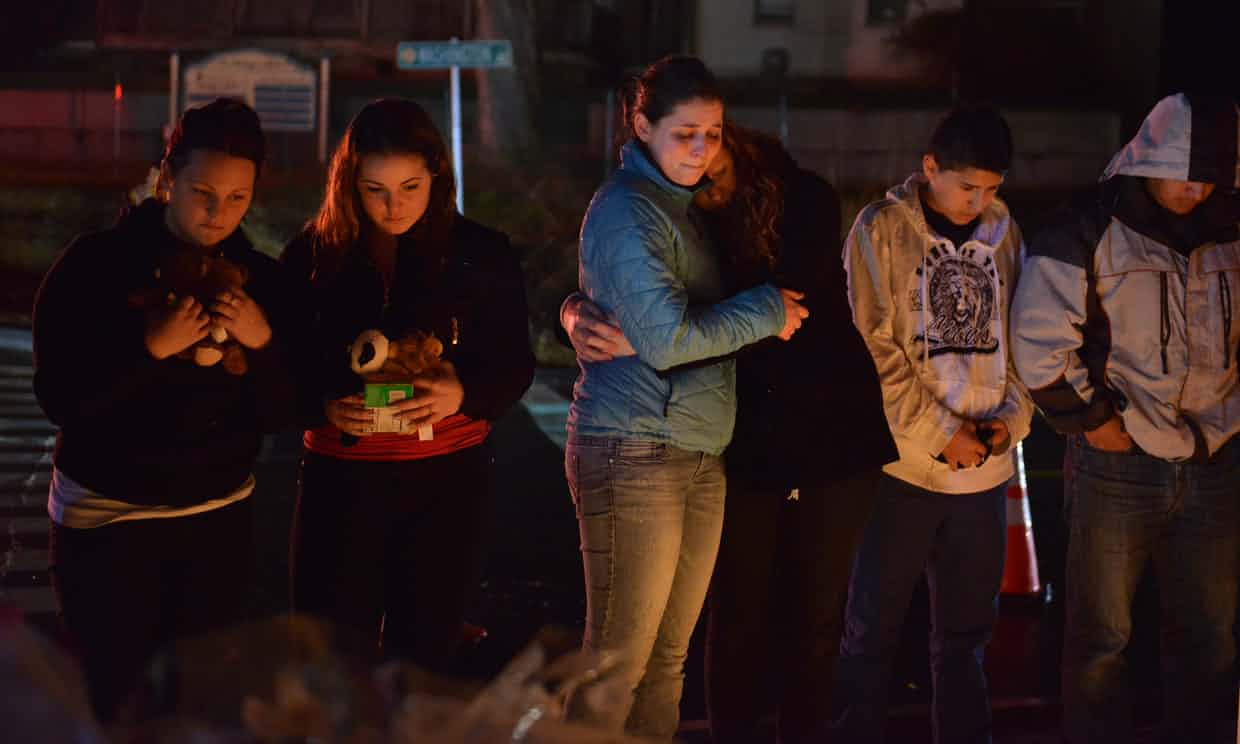 Why Americans won’t give up their guns
The Guardian,
Photograph: Washington Post/Getty Images

Around 3.30am on 23 November 2013 a stray bullet shattered the window of an apartment in Indianapolis where a couple watched television while their two-month-old baby slept. The man called 911, with panic in his voice. “I need to get out of here,” he told the dispatcher. “Can you get a car so I can get out of here?”

“I think there’s several officers already over there,” the dispatcher replied, calmly. The 911 recordings reveal the man breathing heavily as he talks to his partner. “Put the stuff in the baby bag. Find it tomorrow. We’ll carry it to a hotel.” He urges the dispatcher to hurry up and rescue them until she loses her patience. “They’ll be there as soon as they can, all right?” she says. “As. Soon. As. They. Can. OK? Just stay inside your apartment. Do not go out. We’ll get an officer to you.”

Four months later, in the same city, the country’s main gun lobby, the National Rifle Association, held its annual convention with the slogan “Stand and Fight”. In a speech in equal measure demagogic and apocalyptic, the CEO, Wayne LaPierre, evoked a nation in peril and demise. “There are terrorists and home invaders and drug cartels and carjackers and knockout gamers and rapers, haters, campus killers, airport killers … I ask you: do you trust the government to protect you? We are on our own … The things we care about most are changing … It’s why more and more Americans are buying firearms and ammunition.”

Sunday’s horrific incident in Las Vegas was the 273rd mass shooting in America this year. There’s been another since then, in Miami, where four people were shot while attending a vigil to mourn a 30-year-old woman who was shot dead in her car last week.

The enduring question of why America continues to maintain such lax gun laws when such atrocities are so commonplace can in no small part be answered by this frightened man’s call and LaPierre’s dystopian response. The man’s fear and LaPierre’s fearmongering are intimately connected. That connection goes beyond the weapon itself, and the piecemeal laws that might control it, to some of the country’s most cherished myths and pervasive pathologies. When the national narrative is a story of conquering, dominating, force and power, an atavistic attachment to the gun can have more pull than a rational case against it.

In a society that fetishises self-reliance, the gun speaks to rugged individualism – each person should be responsible for saving themselves. In a political culture that favours small government, the gun stands as a counterpoint to a lumbering and inefficient state – defend yourself, because by the time the police get there you’ll be dead. It underpins a certain sense of masculinity and homestead – a real man should be able to protect his family and home. The dispatcher told him to sit and wait; the NRA told him to stand and fight.

But the myths are also powerful. What the gun lobby lacks in breadth of support it makes up for in depth of commitment

These claims for the gun are of course nonsense. Most people who are killed by guns kill themselves. People who have a gun in the house are far more likely to be shot dead than those who don’t. If more guns really made you safer, America would be one of the safest places in the world. As it is seven children or teenagers are shot dead on average every day. Once a week a toddler injures someone with a gun.

It would be easy to blame all of this on the NRA. The gun lobby has been central to stonewalling even the most basic commonsense reforms. Its capacity to lobby and fund politicians, locally and nationally, is unparalleled. It is because of the NRA that people on the no-fly list can still buy guns and there is no government funding for research into how to prevent gun deaths.

Yet while the NRA should not be underestimated, its role should not be exaggerated either. Even as it wins (or blocks) votes in Congress a consistent majority of Americans polled this year believe gun laws should be more strict, that it’s too easy to buy a gun and that if more people carried guns America would be less safe. When it comes to supporting background checks for all gun buyers there is near-unanimity (94%). The NRA has far more power in the polity than influence outside it.

But it has been able to tap into many of the core themes of the broader American narrative in a way that gun-control advocates have not. There is nothing inevitable about this. When a gunman shot children in Dunblane in 1996 Britain tightened its gun laws; when a shooter ran amok in Port Arthur that same year Australia did the same. That’s what mature and responsive democracies do. But in America, appeals to freedom, masculinity, small government and individualism, even when they are flawed, have more purchase than arguments for background checks and weapons bans, even when those arguments are right.

The problem goes all the way to the top. With the largest military in the world by far, raw power was a central tenet of American foreign policy before Trump promised to unleash “fire and fury” on Kim Jong-un. When accused of abdicating America’s role on the world stage, Barack Obama (who had a “kill list”) responded like a mafia don. “Well, Muammar Gaddafi probably does not agree with that assessment,” he said. “Or at least if he was around, he wouldn’t agree with that assessment.”

At home the gun is invoked as a cornerstone of America’s founding story and a safeguard against tyranny. “It’s about independence and freedom,” David Britt, a gun owner, explained to me at the NRA convention in 2012. “When you have a democratic system and an honourable people then you trust your citizens … In Europe they cede their rights and freedoms to their governments. But we think government should be subservient to us.”

These myths are, of course, partial. In a nation that became possible through genocide and slavery, among other things, the gun was central to a particular notion of racial power. If gun enthusiasts were seriously concerned about state tyranny they would have been marching alongside Black Lives Matter demonstrators protesting police shootings and calling for the mass armament of poor, black neighbourhoods. That’s not the kind of tyranny they object to.

But the myths are also powerful. What the gun lobby lacks in breadth of support it makes up for in depth of commitment. In 2013 – after the Sandy Hook shootings – gun advocates were far more likely to have contributed money to a pro-gun group or contacted a public official about guns than those who support gun control. Gun-control advocates, for the most part, want to change laws. Gun-rights advocates, by and large, believe they are preserving “essential truths” that make the country what it is. They have proved themselves more motivated because long after those distressing scenes from Vegas are a distant memory, these myths will remain vivid.

Americans need new gun laws. But in order to get them they will have to start telling themselves a new story about the country it is, has been and wants to be. Their lives depend on it.