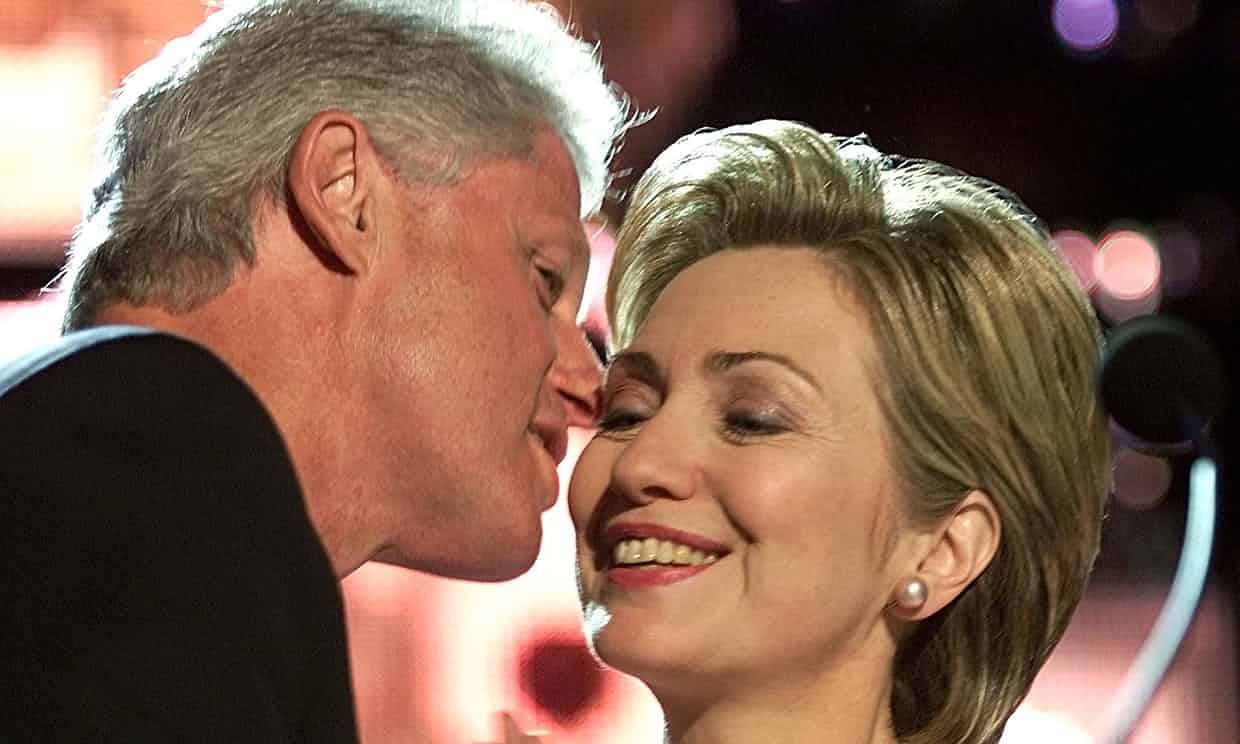 Why Hillary’s biggest liability is still Bill (and no, it’s not about sex)
The Guardian,
Photograph: Reuters

On the evening of 20 September 1996, Bill Clinton returned to the White House from a brief presidential campaign swing. Shortly before 1am the following morning, without ceremony or publicity and with a certain degree of sheepishness, he signed the Defence of Marriage Act. For the next 17 years the act, which defined marriage exclusively as the union of one man and one woman, was federal law. As a result, even when individual states started legalising same-sex marriage years later, gay couples could not file their federal taxes jointly and federal civilian employees could not take unpaid leave to care for a sick partner or enjoy equal family health and pension benefits.

And though he was 17 points ahead in the polls he didn’t want to risk his lead by using his veto in an election year. So he threw lesbian and gay rights under the campaign bus.

On Saturday, Hillary Clinton will hold her official presidential campaign launch rally in New York City. Her husband, Bill, will most likely be by her side and on her agenda will be an unequivocal commitment to gay marriage – the very institution he marginalised when he held the very position she now seeks.

Bill Clinton has always been both a huge liability and asset to Hillary’s political aspirations. Thanks to his prominence she entered elected politics with name recognition. With that name came both his supporters and enemies. In the 2008 Democratic primaries, when she ran against Barack Obama, Bill drew big crowds and media but alienated African American voters by disaparaging her opponent. According to the book Game Change, after he went rogue in the South Carolina primary, one of Hillary’s senior advisers asked her: “If you can’t control your husband in the campaign, how are you going to control him as president?”

This time around the challenge is somewhat different. As a political personality her husband is extremely popular. He polls better than both Hillary or Obama and is a better campaigner. He has also become more disciplined.

But while the Democratic base like who he is, they are far less keen on what he actually did. On a number of fronts, from gay rights to financial regulation and from incarceration to international trade, they would like to reverse if not erase some of the central planks of his presidency. To cherish the memory of him, they must first forget much of his legacy.

In a perfect world none of this should matter. Voters elect a candidate, not their spouse. And it is particularly problematic to judge a woman by her husband’s deeds. After eight years in the Senate and four years as secretary of state, Hillary has a record of her own.

Nonetheless politics is a deeply problematic and imperfect business. Spouses matter. They combed through Michelle Obama’s and Laura Bush’s pasts too. And candidates collude in this, sending their partners on the campaign trail, conducting joint interviews and giving them prime time slots at the conventions.

Clinton, more than any other president created the current racial undercaste.

Bill is also no ordinary spouse and the Clintons are no regular political couple. He’s not just a former president but her fiercest advocate. Thanks to his infidelities and her political ambitions their relationship is constantly in the spotlight. To avoid the debacle of 2008 he will be more intimately involved in her campaign planning this time around. The chairman of her campaign, John Podesta, was his chief of staff. For two years she sat on the board of what is now called the Bill, Hillary and Chelsea Foundation – a multimillion dollar global philanthropic venture set up by her husband. In 2010 she referred to him as “a great sounding board” during her years as secretary of state, insisting: “He remains a very important adviser to me and an important adviser to other people in the administration.”

But to run effectively for the White House in 2016 Hillary has to run away from much of what Bill did in the 90s that has nothing to do with his sexual indiscretions. While he was president, the rate of black incarceration grew exponentially thanks to his “three strikes and you’re out” law, which established mandatory life sentences for those convicted of a third felony and other “tough on crime” policies lead. “Clinton, more than any other president,” argues Michelle Alexander in The New Jim Crow, “created the current racial undercaste.”

He deregulated the financial sector by repealing the Glass-Steagall Act, thereby laying the foundations for the most recent economic crisis. Under him inequality grew, with the disparity between the pay of chief executive officers and the average worker leaping from 75-1 to almost 400-1, according to the Economic Policy Institute. He also pushed through the North American Free Trade Agreement (Nafta), liberalising trade between the US, Mexico and Canada, which sent many jobs south of the border where unions and regulations are weaker and pay is cheaper.

Since most of the flaws with these policies were both predictable and predicted it is disingenuous to dismiss this as merely reflecting the mindset of a different time. Times do change; but basic principles don’t.

Bill Clinton had an agenda. And some of it worked well. The principal reason he is remembered so fondly by so many is because of the economy. Under his tenure unemployment fell from 7.3% to 4.2%, poverty plummeted by 17% and he balanced the budget. He also passed an assault weapons ban and raised taxes on the rich.

But when Bill was running for the presidency the Democrats had been out of the White House for 12 years and were drifting to the right; Hillary is running at a time when they have held the White House for eight years and the base is becoming more progressive. Racial disadvantage, economic inequality, bankers’ malfeasance and gay marriage are all big issues and, on pretty much all of them, her most loyal surrogate is on the wrong side of history.

Bill clearly understands this. Shortly before the Defence of Marriage Act was challenged in the Supreme Court in 2013, he said he now thought it was unconstitutional (the court agreed), and he has argued that “we overshot the mark” on incarceration.

Hillary is clearly acting on it. “It’s time to end the era of mass incarceration,” she said in April; a week earlier she announced her hope that the Supreme Court would rule in favour of same-sex marriage as a constitutional right. In 2007, she called for a “timeout” on trade deals and said “Nafta was a mistake to the extent that it did not deliver on what we had hoped it would.”

Questioned about the differences between her platform and her husband’s record recently, a campaign staffer told the Washington Post: “This campaign will be about Hillary Clinton’s vision for the next 20 years, not re-litigating policies from 20 years ago.”

This would be a weak argument whoever made it. Any campaign, however visionary, must contend with the past, if only to explain how we got here. But from Hillary it rings particularly hollow. She was resident in the White House 20 years ago; the agenda for the next 20 years is shaped by much of events 20 years ago; and those 20-year-old policies were the work of her most high-profile champion who also, just happens to be, her husband.