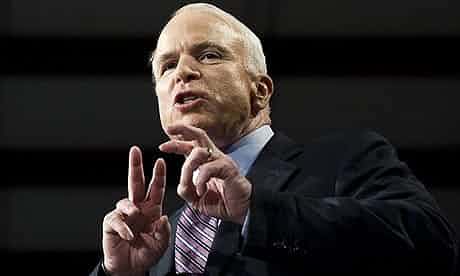 Why John McCain is losing
The Guardian

If you were looking for an explanation as to why John McCain's campaign is floundering so badly you could do worse than come to Roanoke.

1) His own supporters don't like him. Or at least they don't like him enough. This counters the dominant narrative of the primary season that Democrats were bitterly divided while the Republicans quickly rallied around their candidate. I have yet to meet a Democrat here who supported Hillary Clinton who bears a grudge against Barack Obama. That doesn't mean they don't exist. But Obama only won this town narrowly, I've met a lot of Democrats and they all seem to be behind him. On the other hand, the Republicans have no great love for McCain. They respect him - or at least they respect his military service. But most did not vote for him (Huckabee won Virginia and Roanoke) and they talk about him in much the same way that Democrats spoke about Kerry in 2004. He's the candidate they've settled for, not the one they wanted. They do however love Sarah Palin who has galvanised many into action. But at the end of the day huge support for the number two just doesn't have the same impact.

2) He has few effective surrogates. In the two and a half weeks that I've been here, the Democrats have had rallies and meetings with Bill Clinton, Indiana senator Evan Bayh (standing in for Joe Biden whose mother-in-law was dying) and former Democratic National Committee chairman Terry McAuliffe. On Friday, Barack Obama is coming. The Republicans have had no one and as of yet plan to have no one. If you cast about for those who might speak for him, you can see why that would be. Obama can count on his wife, Michelle Obama, Biden, Biden's wife Jill and the Clintons to speak for him. McCain could not send out his wife, Cindy, George W Bush or George HW Bush to stump for him. Indeed, for the first few weeks he would barely send Palin out on her own, either because she was not ready or was in preparation for her debate. So while the Obama camp has been covering huge amounts of electoral turf, getting free local television coverage and energising their supporters on the way, the McCain campaign has all too often been travelling in a pack and leaving little opportunity for anyone, including him, to come to a place like Roanoke.

3) Neither he nor Palin has been here. A look at the election results of 2004 shows that Bush won by racking up huge majorities in small county after small county which in the end more than compensated for his poor showing in the cities. He didn't just win them. He won them big. If McCain is going to win Virginia, he has to take the southwestern region of the state by a sizeable margin. At present, that is not going to happen. Local Democrats say that Obama needs to win 40% in this area to be viable in the rest of the state. A poll taken 10 days ago gave him 39%. Given other trends, it's almost certainly much higher now. A visit, particularly by Palin, would make a huge difference in a region like this. Instead they both went to Virginia Beach (see point 2) and then she headed to Richmond - a city he is never going to win.

4) He is being outspent and has been outorganised. Last month, Roanoke city, which is Democratic, saw more than three times the increase of registered voters as the county, which is heavily Republican. The Obama campaign has 48 offices and a further 19 sub-offices in Virginia. The McCain campaign has 21. Obama has spent more than twice as much as McCain in television ads in the region. The combined effect of those advantages is that while Obama's message is constantly being relayed on the airwaves and in person while volunteers mobilise the base, the physical and political presence of the McCain campaign is at best patchy.

5) He shouldn't have to either come here or spend money here. Virginia has not voted Democratic since 1964. The last time before that was 1948. The very fact that McCain should be spending money, organising and campaigning here tells you just how much trouble he is in. In North Carolina, Indiana and most recently Missouri, Obama is encroaching heavily into what should be McCain's safest territory. He is forcing McCain to spend money and time in places that ought to be safe or risk losing them entirely. The last place a Republican presidential candidate needs to be thinking about three weeks before polling day is southwest Virginia. But if McCain doesn't think about it, he can't win the state. And if he doesn't win the state, it's difficult to see how he can win the country.