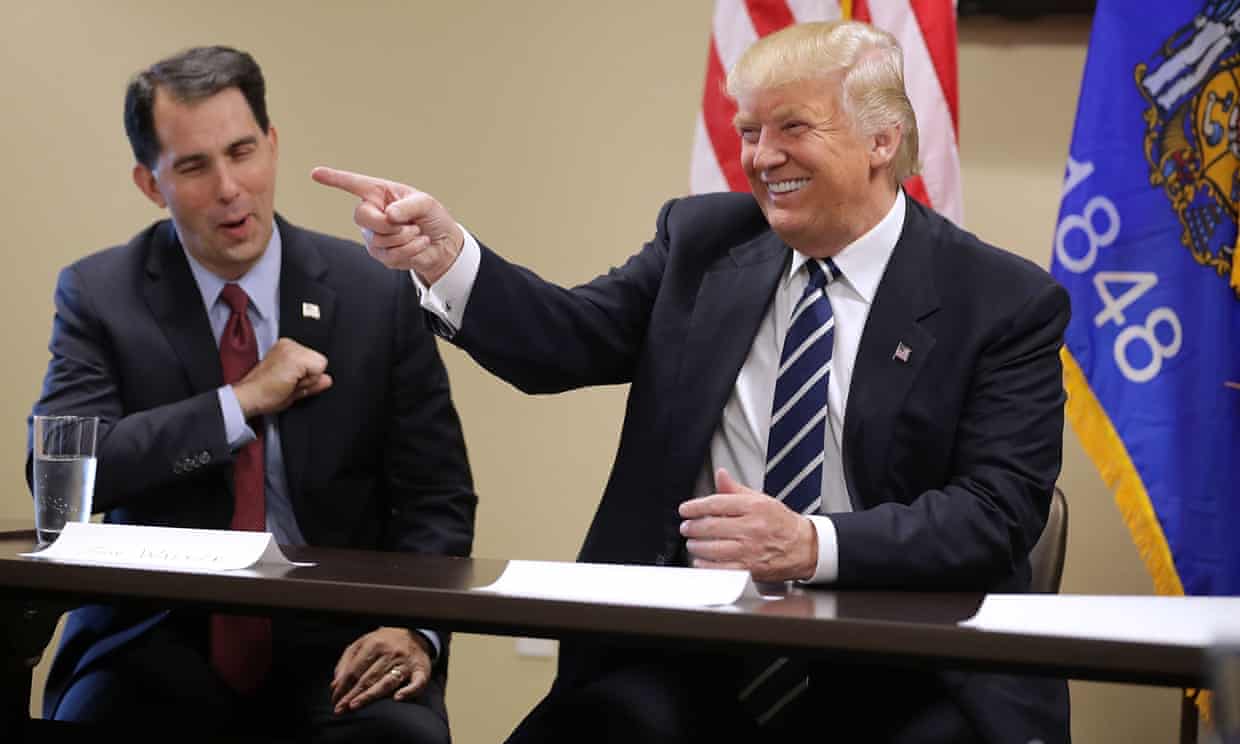 Wisconsin: Trump's base fired up by his bombast but will that be enough?
The Guardian,
Photograph: Chip Somodevilla/Getty Images

In the roof of a converted barn in rural Kenosha, Racine county’s southern neighbour, Republican candidates for US Senate all the way down to county sheriff, gathered this weekend to rally the faithful. They pressed flesh, slapped backs, leaned in and ate chilli and hot dogs with about 90 local activists.

Most were keen, in some way, to brandish their law-and-order credentials. Some mentioned the “caravan” of asylum seekers coming through Mexico as an illustration of why the nation must be vigilant; a couple made it clear that they “backed the badge”, a pro-police campaign set up in response to Black Lives Matter. Congressional candidate Bryan Steil, a corporate attorney looking to step into Paul Ryan’s shoes representing this district, mocked his Democratic opponent, Randy Bryce, for the nine times he has been arrested.

But despite the emphasis on security the matter of Cesar Sayoc, the alleged mail bomber and Trump supporter who had been arrested the day before did not come up. And the 11 Jews killed at prayer in their Pittsburgh synagogue that morning earned just a brief mention from the very last speaker. Van Wanggaard, a state senator up for re-election, said the news from Pittsburgh that morning had hit him hard. “I really think words mean something,” he said. “And we don’t need to talk about negative stuff about the other side.”

Asked afterwards who or what was responsible for the decline in civility, Wanggaard said he didn’t really know. During the primaries Donald Trump wasn’t even his second choice for the leadership: he backed Wisconsin’s governor, Scott Walker, until he backed out, and then the Florida senator Marco Rubio. But he thinks Trump is doing a great job. “He’s doing what he said he was going to do,” he said. “I don’t always agree with the delivery. But I think he has a pure heart. I think he wants to do well for everybody.”

Commentators refer to Trump “capturing” the Republican party as though he is holding a mostly moderate grouping against its will. In reality, he is the leader many of them always wanted but didn’t imagine could either win or deliver.

I don’t always agree with the delivery. But I think he has a pure heart. I think he wants to do well for everybody.”

Ken Brown, who runs an eyeglass store in Racine, says only he decided to vote for Trump at the very last minute. “I didn’t expect him to win,” he said. “I just didn’t want to just let Hillary Clinton to win without my vote going the other way. But I’m shocked that this man has accomplished so many conservative things. I didn’t think the tariffs were going to work. I didn’t think backing out of Nafta [the North American Free Trade Agreement] was going to work. But they are working.”

Erin Decker described herself as “a conservative before [she’s] a Republican”. The chair of the Kenosha county party backed Walker, Rubio and then Ted Cruz in the primaries: “I didn’t know if Trump was really going to push the conservative agenda. But since he was elected he’s really watched out for people and has proved he’s a conservative. He’s pushing for smaller government, less regulation, he supports American workers. He wants to make America great again. He really has surprised me.”

So long as he is delivering they are prepared to indulge, ignore or simply make peace with his behaviour. Brown said if he was his chief of staff he would disable his Twitter account; Decker said, “he can be a little unpolished, so sometimes he says things that can be a little cringeworthy”. But she also believes that this is part of his appeal.

“He’s speaking real and he’s not running it through PR filters so it really doesn’t bother me that much. It may be just that I’m not used to it because you’re so used to politicians walking that fine line and being that PC and everything, and it’s hard to get used to,” she said.

Time and again they will sidestep the question of his vulgarity, bigotry or bluster with the caveat that: “He’s not a conventional politician.” When asked about his treatment of women, Kim Augustine claimed never to have heard the recording of him boasting that he could “grab [women] by the pussy”.

They feel Trump is coming through for them in a way that neither of the Bushes did; he has won in a way that neither Mitt Romney nor the late John McCain could; he has endured in a way that Sarah Palin didn’t or couldn’t. The Republican party had encompassed a fairly broad range of white America – encompassing social liberals, fiscal conservatives, libertarians, fundamentalists, southern racists, northern industrialists, western ranchers and suburbanites. In 2012 the number of Republicans who thought of themselves as “liberal” was on a par with the number who ticked the box Aleut or Eskimo; by now it must be a rounding error.

As Geoffrey Kabaservice pointed out in his 2012 book, Rule and Ruin: “The appearance of a Republican party almost entirely composed of ideological conservatives is a new and historically unprecedented development. It is only in the last decade or so that ‘movement conservatism’ finally succeeded in silencing, co-opting, repelling, or expelling nearly every competing strain of Republicanism from the party.”

The question, in a state like Wisconsin, is how many non-believers can they take with them. Since 2000 the prize, nationally, has gone to whoever can galvanize their base most effectively. But in an evenly matched state like Wisconsin, if both sides are getting their core vote out then the only two questions are: “Who has the bigger core?” and “How much of the slender centre can you pull your way?”

Where Republicans are concerned, that translates into: for how many is the behaviour of the president beyond the pale, or the conservative agenda from the state capitol too extreme? For while Trump may not be on the ballot here in 2018, Walker has served the same role as governor only for longer.

If the mood among Democrats is cautious optimism Republicans are grappling with frustrated inevitability. The race for governor appears tight; Leah Vukmir, the Republican Senate candidate, has more often than not trailed by more than double digits in the polls; even Steil offered an extended American football metaphor that suggested he was not quite “over the line” yet.

“It’s been a weird year, hasn’t it?” said the attorney general candidate, Brad Schimel. “If this made any sense Governor Walker would be re-elected by acclamation.”

Schimel believes people have forgotten how bad things were before Walker came in. Decker agreed: “I think people just get complacent and happy with what they’ve got and think the grass is greener on the other side.” They blame the media for not reporting things in the right way and the Democrats for lying about their healthcare plan. The veracity of these accusations is less relevant, a week before an election, than the fact of them. They suggest an awareness that the message is not getting through and few ideas about how to tackle it.

That doesn’t mean the Republicans can’t win here. “I sense more enthusiasm since this Kavanaugh circus,” said Decker, referring to the demonstrations over sexual assault allegations against the recently confirmed supreme court Justice, Brett Kavanaugh. “The caravan coming to the southern border is really firing up everybody too.”