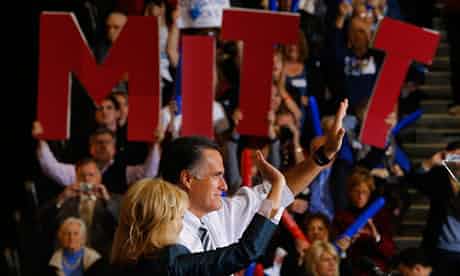 As hurricane Sandy barrelled towards the east coast, Iowa's Des Moines Register newspaper endorsed Mitt Romney – the first Republican it had endorsed since Richard Nixon in 1972 (look how that turned out). Arguing that "the partisan divide had hardened" under Barack Obama, the leader writers said: "One of the biggest obstacles either candidate faces is partisan gridlock in Congress [which] has hampered not only the economy, but the entire country."

A week earlier the Orlando Sentinel, which backed Obama in 2008 in the crucial state of Florida, made the same argument in its support for Romney. "With Obama in charge, the federal government came perilously close to a default last year," it said. "It verges on magical thinking to expect Obama to get different results in the next four years."

As Sandy inched closer, coverage of the campaign – like the campaigning itself – was suspended. All talk of gridlock was eclipsed by scenes of mayhem. One day reporters were standing in front of electoral maps analysing every poll, demographic and gaffe while speculating about the outcome. The next they were standing in sou'westers in wind and rain speculating about where it would make landfall. For a few days Ohio got a reprieve while New Jersey got a battering, and pollsters took a back seat while meteorologists drove the story.

But when the winds subsided and the campaigns resumed, the dynamics of the race had changed and the validity of those arguments had been challenged. The hurricane and its aftermath helped illustrate the vacuity of this election campaign, what's at stake in its outcome, and who's responsible for the gridlock. With the frenetic polling and endless punditry, there may have been precious little calm before the storm but there was a greater degree of clarity after it.

Beyond a punchline for Romney at the Republican convention, climate change simply has not come up during this election. Moderators didn't ask about it during the presidential debates, and both Obama and Romney were too busy posing as friends of oil and coal to mention it. While no single storm can be attributed to climate change, warming oceans make them more likely – and a clear pattern is emerging that would help to explain an occurrence such as Sandy. As the New York Times's Nicolas Kristof pointed out, three of the 10 biggest floods in lower Manhattan since 1900 have occurred in the past three years, while seven of the 10 warmest summers on record have taken place in the past 12.

But to raise an issue like this during an election takes the kind of political courage that has long been in short supply. Given the hours of coverage and the billions of dollars devoted to the election, it's stunning how few of the nation's most glaring problems are being discussed. The US now has more people in its penal system than the Soviet gulag at its height; its capital city has a male life expectancy lower than that of the Gaza Strip; and the country openly operates a system of torture and a policy of targeted assassination. The fact that nobody even expects these issues to come up tells you something about the low expectations Americans have of their politicians.

But Sandy concentrated minds. Disasters have a way of doing that. Its arrival prised a much coveted endorsement for Obama from the New York city mayor, Michael Bloomberg, an independent who formerly ran as a Republican. "The devastation that Hurricane Sandy brought to New York City and much of the north-east … brought the stakes of next Tuesday's presidential election into sharp relief," he said. True, Obama had not campaigned on it – but at the very least he acknowledges its existence, made some efforts to address it, and is not beholden to a party that refuses to accept the science.

As Bloomberg was penning his endorsement, Obama was touring storm-hit areas with the Republican governor of New Jersey, Chris Christie. Christie, Romney's first pick for vice-president, delivered a keynote speech at the Republican convention. The week before, he had described the president as "a man wandering around a dark room, hands up against the wall, clutching for the light switch of leadership, and he just can't find it". Last week, when the lights went out, he praised Obama for his handling of the storm, saying: "The president has been all over this and he deserves great credit."

While Sandy prompted both Bloomberg's and Christie's conversions, elsewhere in the country came evidence of a deeper split in Republican ranks. In the Nebraska Senate race, several Republicans came out against the Tea Party-supported candidate and for the Democrat, Bob Kerrey.

A week earlier, George Bush's former secretary of state Colin Powell – a Republican – broke ranks again to back Obama. "I think I'm a Republican of more moderate mould and that's something of a dying breed, I'm sorry to say," he said. "But, you know, the Republicans I worked for are President Reagan, President Bush, the Howard Bakers of the world, people who were conservative … but people who recognise that, at the end of the day, you got to find a basis for compromise. Compromise is how this country runs."

Powell's breed may be further from extinction than has been apparent. For the past four years, Tea Party activists have been claiming they want to take their country back. Now a growing number of Republicans appear to want to take their party back.

And so it was that by the end of last week you got a sense of what an Obama presidency might have been, and might be again, were it not for the wilful obstruction of an opposition whose primary stated aim was to deny him a second term: too timid for what is necessary but nonetheless the best that is possible within the narrow confines of American electoralism. Of course, he still has to win on Tuesday, which is by no means certain. But the dying days of the campaign put to rest one of the cases against him that has gained most traction among waverers.

The arguments of the Des Moines Register and the Orlando Sentinel are true as far as they go. But they don't go very far unless they locate the source of the gridlock and hold to account those responsible for it. In the absence of that, handing the presidency to Romney becomes little more than a reward for bad behaviour.